The camp is now over. At least to me, returning to the everyday urban life from our green island has been somewhat of a culture shock. I miss my hammock bed, evening saunas, morning sit spot, feeling motivated to wake up, and the island of bats, badgers, raccoon dogs, snakes, birds, mosses, lichens, flowering trees, and only one car. (Maybe not the mosquitoes, though.)

The last couple of days were busy preparing the final performance on Saturday. It was interesting to observe how the ideas were flying and taking shape within the group. On Friday, the shape of the performance was still very much open, but teamwork of 20 people can work wonders. Texts were written, materials and props were ordered from the mainland by last-minute phone calls, and the big cardboard letters were being painted until midnight.

Below, you can see a few glimpses of what surfaced from our collective imagination within this short time frame.

where richness of life

is the guardian of itself

trees are on our side

reaching for the light

by this economy of death

we want a future

that is not only for survivors

but something to be lived for

connected by roots and touches of the leaves

the swirl of the tree rings carved by time

its way is that of waiting and returning

does not maximize profits

clear blue sky is not there for our health

flower fields are not for us to see

waterfalls not for us to dive in

is where we belong to

clear blue sky is there for our health

flower fields are for us to see

waterfalls for us to dive in

On the island of Vallisaari

The final day of the course is tomorrow and anyone is welcome to see what we have come up with during the past few days. Free guided tour of the island starts at 14 from the ferry port in Vallisaari. This is an invitation to connect to nature and rethink our place in the world. See the poster (pdf). 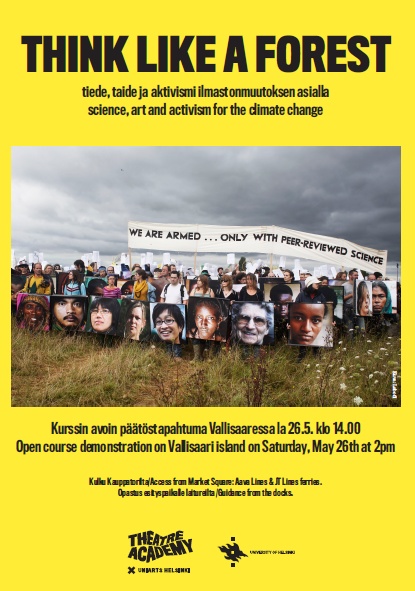 Ever been chairing a group discussion with the intent of making everyone’s opinion heard but fearing that reaching a compromise will take ages and still you can’t be sure the quieter ones have had a chance to express their views?

Interrupting people is often socially cumbersome,  especially in multicultural groups  where  the finesses of social norms vary strongly between individuals, but  interruptions are needed  for effective  meeting culture – important pieces of information should be presented  at a relevant point of the discussion. How can any chairperson (or facilitator) know in which cases they should allow interruptions?

I have often dreamt of a colour changing light installed to my forehead, such that I could switch it  on to indicate various things without raising my voice to interrupt the speaker, for example ‘I don’t understand’, ‘There is a fact that you need to know now, because that will change the direction of the discussion’, ‘I need to go to the toilet’ , ‘I can’t hear what you are saying’.

Apparently there is no need to install such a light, as we can use our hands to signal these things, and many activist movements have developed their own sets of hand signals (see for example https://www.seedsforchange.org.uk/handsig.pdf) to make meetings smoother.  Signs for ‘Sounds good’  and ‘I’m not too keen on that’  help the speaker to gauge how far from collective agreement the group is without having to call a vote.

Even if this sounds artificial for use in workplace meetings, I would give it a go even one single time: teaching a sign system to a group is a way of making the rules of  group discussion and decision making clearer – even if the signals are not adopted as a permanent feature. It is for example worth realizing that ‘the rest of you can do that, but I won’t join you in this activity’ is a different statement than ‘I don’t want this group to get involved in this activity, I will have to  leave the group if you do that’. Turns out that my 10 year old daughter had learned several of the signals at school, most notably the ‘let’s get  back to our topic and stop all speaking chaotically’ signal.

The introduction of signals in Vallisaari made me start to analyse the diversity of types of interruptions and failure modes of group discussions. The ‘too much macho-alpha-crap’ signal will come handy, too!

The camp has been up and running for four full days already, and its inhabitans have been way too busy to blog. The days have been packed with various activities such as games, learning about group dynamics and collective decision-making, sorting out practical matters, getting to know each other and the island, learning about the role of forests in the Finnish economy and culture, miming the principles of permaculture, studying tree rings, sharing feelings and emotions surrounding the climate crisis, swimming in the chilly sea, and crowded evening saunas, among others.

One of my personal favourites in the program was the lecture on quantum mechanics on the second evening by Hanna Vehkamäki, professor in computational aerosol physics at the University of Helsinki.

Quantum mechanics has revealed that instead of the deterministic laws of classical physics, our world operates in a very quirky manner. In the very small scale, the only information available to us is in the form of probabilities.

If we send electrons towards a wall with two narrow holes (the so-called  double-slit window experiment), it is impossible to predict the route of a single particle or its final position on the screen behind the window. According to Hanna Vehkamäki, it is wrong thinking to even talk about the route or location of a single particle. The electrons arrive on the screen randomly, it is only with a sufficient number of particles when we begin to see the underlying, unexpected probabilistic pattern. But when do we see a pattern forming from the random observations?

Likewise, we can think, the state of the world consists of an indefinite number of local events. Only by looking at things with sufficient distance (both in space and time) it is possible to see patterns and narratives forming out of this chaotic web of happenings.

Climate activists and theoretical physicists both need to live with the unsatisfaction – and fascination – of not understanding, not being able to predict, not knowing the outcome in our world which is incredibly complex and deeply rooted in uncertainty.

The action is on.

Our pre-exercise for the camp was to choose the best action around any issue. Here we were divided into groups and we told the chosen actions as stories to the other group members. Then every group picked one action and performed it to the other groups. The extra challenge was to present the action without  saying any words. We were allowed to use any material that was available on the island.

We made performances of five different actions, which handled  social and ecological  issues in our society.

Sompasauna is a sauna located in Kalasatama, Helsinki. It was built on a wasteland of a former harbor by a couple of men who had found an abandoned stove. It is made mostly of construction waste and was the first public mixed sauna in Helsinki.

In 2017, Sami activists occupied an island in the Tenojoki or Tana river region straddling the border between Norway and Finland.  The purpose was to protest against new rules which restrict the traditional Sami  fishing technique. They also declared a  moratorium on the fishing regulations.

Residents of Brussels had a picnic to reclaim the streets in 2012. There were at least 2000 residents having picnic in one of the central avenues of Brussels, and demanding more room for pedestrians and cyclists. Later on Brussels has reduced places downtown where cars are allowed.

#MeeToo is an international movement against sexual harassment  and assault. The hashtag started to spread virally in 2017 and it’s meant to reveal the extent of the problem as well as stand in solidarity to those who have been hurt. The movement has aroused public discussion around the topic in global scale.

Tilted arc by Richard Serra was a public art installation displayed in Manhattan from 1981 to 1989. The sculpture consisted of unfinished rust-covered COR-TEN steel plate placed in the Federal Plaza. According to Serra, the purpose was to make the viewer become aware of himself and of his movement through the plaza. It was finally removed because it gained so much critic, since people working in the area found it ugly and disruptive to daily routines.

After performances we made conclusions by collectively creating a mind map around the actions through discussion.

Over the upcoming week, this blog will follow the activities of a bunch of people on a small uninhabited island, coming together to work on a pressing issue: tackling the climate crisis.

Each individual will bring to the island their personal skills and perspectives of our common world. We are a group of 20 artists, activists, researchers, and university students representing various disciplines: forestry, dance, meteorology, acting, dramaturgy, geophysics, light and sound design, and aerosol physics.

The work on the island will start from the very basics, covering the fundamental needs of food and shelter in our tent camp. There will be visiting lecturers and teachers, discussions, bat observing, and preparing the grand finale of the course, the Performance Action. What will be the outcome we do not yet know, but you can come and find out on May 26th, when the camp will be opened for visitors.

The camp will be located in Vallisaari, Helsinki, Finland, a former military island just a stone’s throw from the Suomenlinna UNESCO World Heritage Site. For a long time, Vallisaari (“Embankment Island”) provided fresh drinking water for sailors, supplies such as grazing land and firewood for the neighbouring Suomenlinna sea fortress, and acted as a base for pilots. Later on, under the Russian rule of the 19th century, fortifications were extended to Vallisaari itself.

In the 20th century, Vallisaari continued to serve the military as a storage area of weapons and ammunition. The human life on the island flourished around the mid-century, when it was home to some 300 people, a small rural community having its own school, shop, and cultural life, in addition to gardens and animals.

After the human settlement slowly disappeared, nature has been taking over the fortifications and other human traces on the island. The Finnish Defence Forces gave up the island in 2008 and it was opened to the public in 2016. Vallisaari boasts rich nature, having the highest diversity of species in all of Helsinki archipelago. This diversity is partly a consequence of human presence on the island, the meadows and other cultural landscapes as well as fortifications and caves providing many different habitats for life to thrive.

For 9 days, our group will be part of the web of life on the island, studying our place and role in the world where the human species keeps violating the planetary boundaries and ecosystems are crumbling as a result.