The users of the popular local bike-sharing system in Helsinki are mainly young adults and living in the downtown shows my recently finished master’s thesis. Almost 80 % of the trips were made by the users who were living in a postal area with at least one bike station in 2017, which shows how the service has been embraced especially by those living in the central ares of Helsinki. 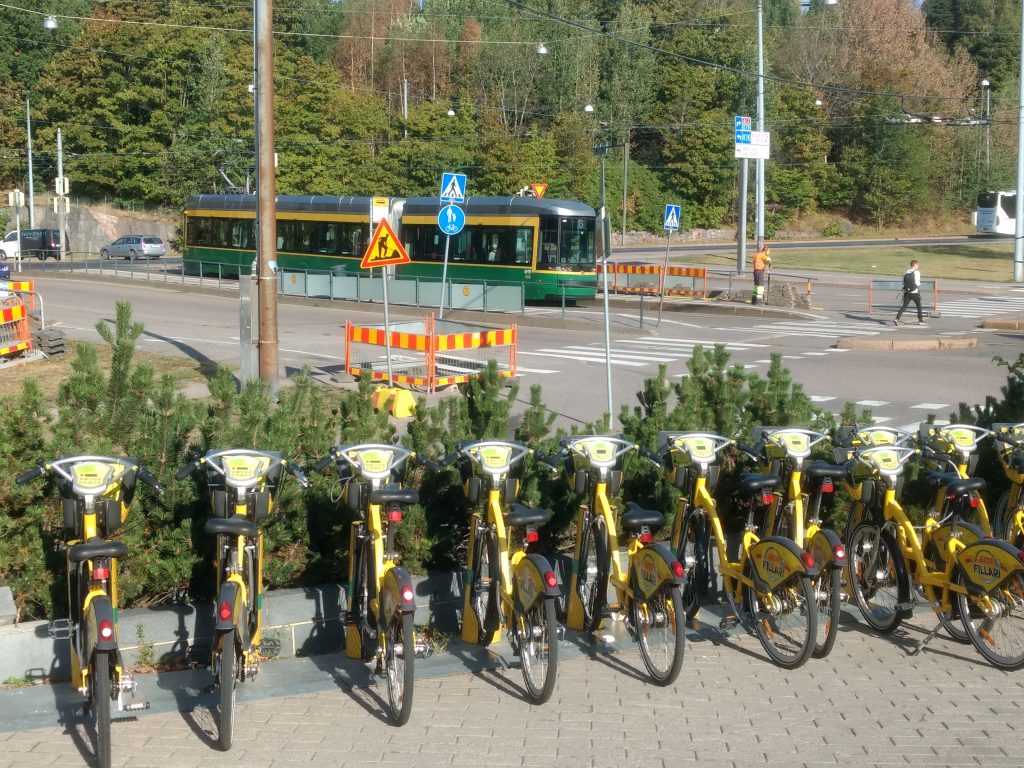 The new bike-sharing season is here again and the system coverage are has expanded In Helsinki! Bike-sharing systems have become popular and attracted wide interest in Finland and elsewhere in recent years. Many cities have employed shared bikes, which aim to provide new mobility option for citizens. Shared bikes are also strongly linking to targets to increase the share of sustainable travel modes in cities, which partly explains their enthusiastic reception by many.

My master’s thesis titled as  ”Bike sharing as part of urban mobility in Helsinki – A user perspective”, which examined bike-sharing users is now accepted and published. The work, accepted with the highest grade, focused on bike-sharing users, usage patterns and how equally the system is serving the citizens. The aim of the work was to bring new information to support planning and development of the bike-sharing systems in Helsinki and elsewhere. I used a data set provided by Helsinki Region Transport and City Bike Finland, which contained all the bike-sharing trips (~1.5 million) from 2017. Before the data analysis, I had systematically reviewed almost 800 scientific articles focusing on bike sharing.

Internationally, bike-sharing system have been hugely popular and in the public discussion, the systems are often covered positively. Meanwhile, there has been critique in the scientific literature that shared bikes would only be serving certain population groups. This contradiction got me interested in to examine the local users in Helsinki more closely.

The study showed that in Helsinki, the use of bike-sharing system has been internationally high. Young adults are emphasized in the user base and especially when comparing by the number of trips, male users are over represented. Compared to regular cycling, the profile of bike-sharing users is less diverse than among all cyclists in Helsinki. Most of use is generated by those, who have a bike-sharing station in their neighborhood. The usage patterns of these users are also different compared to those who are living outside the station coverage area. For example, the users living outside the area have significantly higher shares of potential public transport integrated trips on average. Use activity and the subscription type were also found to be important factors shaping usage patterns.

The study also showed that bike-sharing systems have been actively and extensively studied. However, the study areas seemed to be concentrated to cities where bike-sharing data were available. This observation highlights the role and the need for open data in studying new mobility modes.

The upcoming summer will be interesting from my results’ perspective now when the bike-sharing system area in Helsinki expands. It remains to be seen whether the over-represented user groups were only more eager to quickly embrace the new system in 2017 or whether the same usage patterns still prevail after the expansion. From the equity perspective, the bike-sharing system will be now available to a larger group of citizens better than before. Young adults have found the system well, but it is important to pay attention that shared bikes and cycling are being promoted among the whole population to better advance and increase their role as part of sustainable urban mobility.

The full work can be found from here: MasterThesis_EliasWillberg

Animated visualization of the system dynamics can be found from here https://blogs.helsinki.fi/accessibility/2018/05/18/one-day-of-city-bikes-in-helsinki/

The abstract selection for the NECTAR conference 2019 is now done! We received a record number of abstracts, 190, which was fantastic!

The conference, which will be organized by us and the University of Helsinki together with the Aalto University, Helsinki Institute for Sustainability Science (HELSUS), Urbaria, and the City of Helsinki takes place 5-7th June in Helsinki.

Registration links to the accepted participants have been sent via email!

There was a great deal of high-quality abstracts and the selection process was certainly not easy. The selection was done based the scope of the abstract, scientific quality, NECTAR membership and the possibility to fit the presentation in a coherent conference session. The sheer number of papers challenged us, but as the picture shows by sticking with the good old pen and paper style we were able to handle the task!

Looking forward to a great conference! 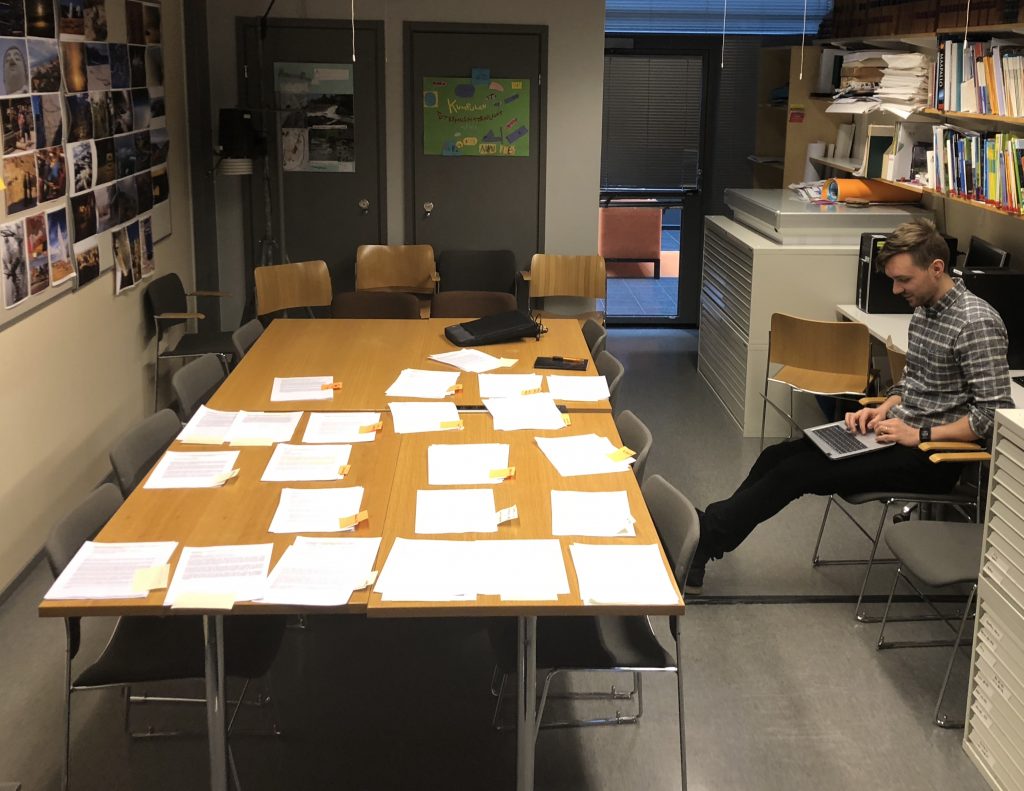 Call for papers for NECTAR 2019 conference is now open!

Digital Geography Lab and University of Helsinki will organize an international NECTAR conference (5.-7. June 2019) in Helsinki together with the Aalto University, Urbaria and the City of Helsinki. NECTAR is a scientific research network concerned with transport and communication issues and the biannual conference brings together transport and mobility experts all over Europe and elsewhere.

We have two fantastic key note speakers in the conference, professors Jan Gehl from Denmark and Tim Schwanen from Oxford, UK.

The theme of the conference is “Towards Human Scale Cities – Open and Happy”. The conference calls for presentations on advancements in the field of transport, communication and mobility. The focus of the conference will be on urban transportation and the new possibilities that open data and digital technologies provide for mobility solutions. For example, presentations may discuss how transport policies are and should be changing, present emerging ways of organizing the daily mobility to make cities more sustainable and more pleasant or present novel ways of analyzing transportation and mobility from the perspective of people.

Welcome to “open and happy” Helsinki!*

*See more information and submit your abstract in the conference website: https://www.helsinki.fi/en/conferences/towards-human-scale-cities-open-and-happy

The visualization shows all the trips (n~7200) made by Helsinki bike-sharing system bikes on Monday 15.5.2017 . Because the data set does not contain GPS tracks but only the start and the destination points, the paths for each trip shown in the map are not the real ones but assumed using fastest routes . Based on the data set  information however, the fastest route assumption is more or less valid especially during weekdays. White points are the city bike stations (n=140).

About the visualization: The animation is done using QGIS time manager plugin.A big thank you also goes for these two excellent tutorials listed below that helped in making the animation:

We are currently calculating a new version of the Helsinki region travel time matrix. The 2018 version of the matrix contains the changes in travel times that the new West Metro line has brought and there is now cycling included as a new travel mode.

The publication of the new matrix will hopefully take place within a few weeks once the calculations are done and we have finalized quality assessments for the dataset. We will naturally communicate more about the data and publication then. The published data set can be found from this blog as usual but we will also bring the metadata records to the Avoindata.fi service. 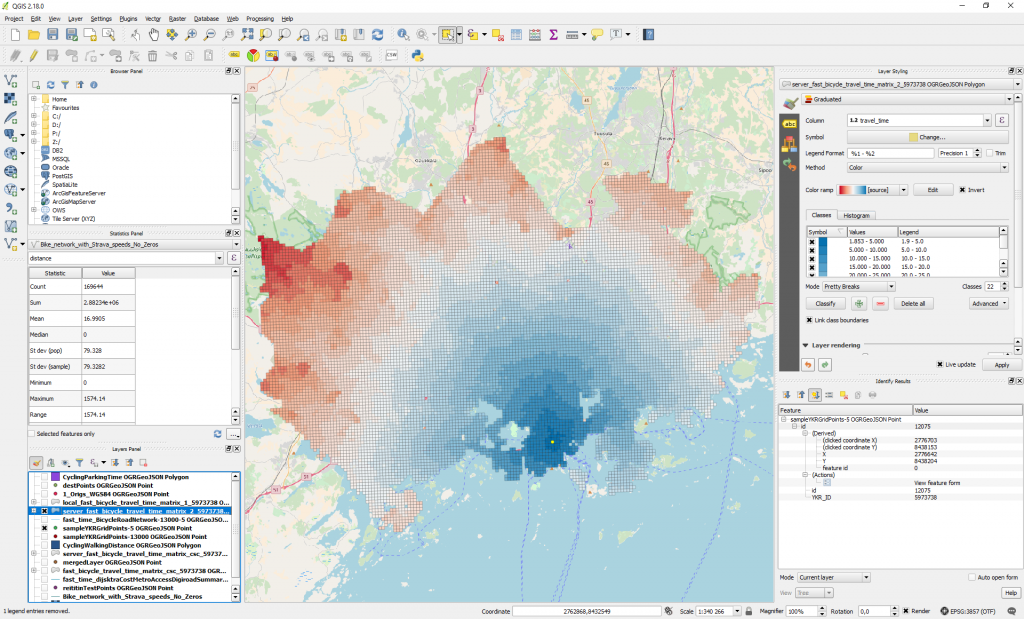 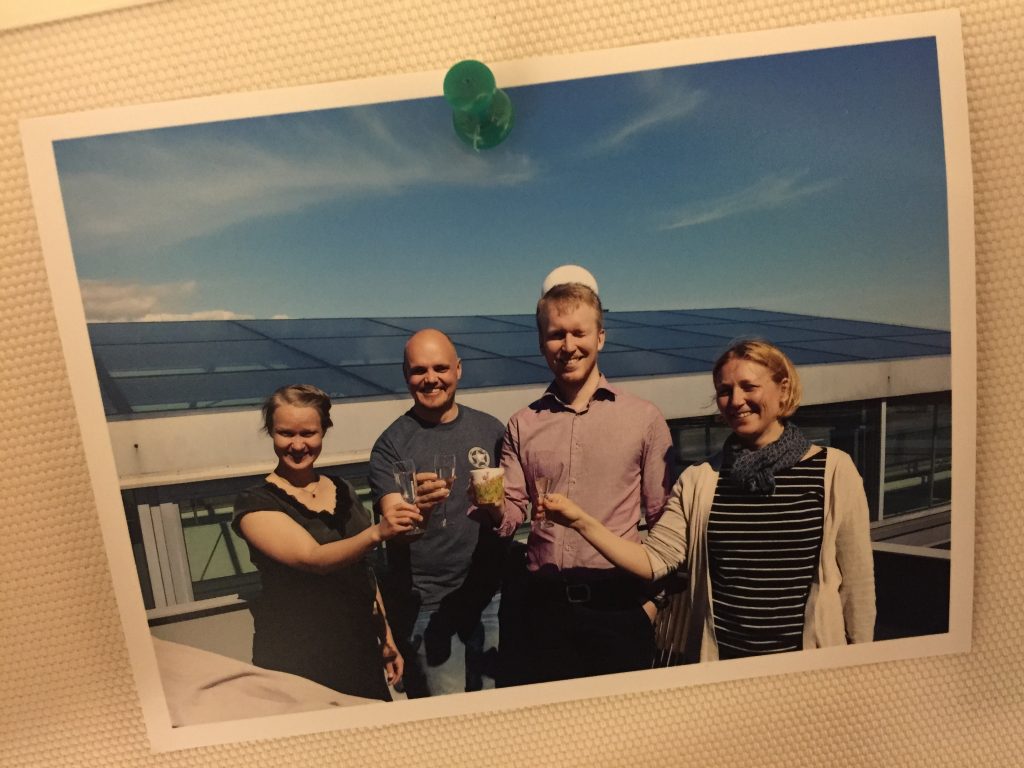 Joona Repo’s master’s thesis titled Long-Term Accessibility Change of Services: Public Library Network in Helsinki Region as a Case Study was awarded the City of Helsinki’s reward, which are given annually for 10 distinguished theses. If you want to know more about the thesis, the summary is available here. Congratulations Joona!

Link to the news: https://www.hel.fi/uutiset/fi/kaupunginkanslia/kaupunki-palkitsi-kymmenen-helsinki-aiheista-opinnaytetyota

Exceptionally many masters’ theses focusing on accessibility were published in 2017, 11 altogether. In these works, accessibility in Helsinki or in the wider Helsinki region was viewed from many perspectives and using various methods. All the theses expanded our understanding of accessibility while bringing new perspectives to support our current research. Therefore a short summary of the works published last year is in place. 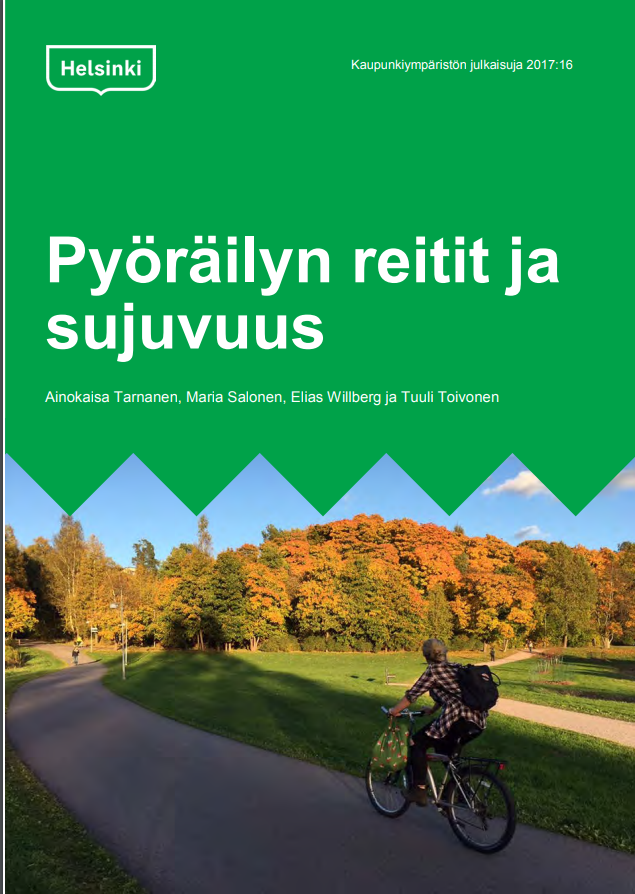 Our joint report with the Helsinki city planning department titled Cycling routes and fluency is now published! The report has been made by Ainokaisa, Maria, Elias ja Tuuli.

The report examines comprehensively where people cycle in Helsinki at different times such as during the day, the week, the month and the year and how fluent the cycling seems to when looking at the average speeds and the waiting times in junctions.

The most popular cycling routes appeared to go beside the railroads and along the road sections where there was not alternative routes such as on bridges. The cycling speeds were the fastest on the main roads while the downtown speeds stood out being generally slower than elsewhere.

The data in the report is based on the trips recorded by the users of the Strava sport application. One of the purposes in the report was to examine how suitable this data is to study cycling. It proved to be quite reliable and in many ways useful, but spatial and temporal variations as well as the user distortions are important to take into consideration when analyzing the results. Strava data, however, offers several promising future research avenues to study cycling in the Helsinki region.

The report can be found here (only in Finnish)! 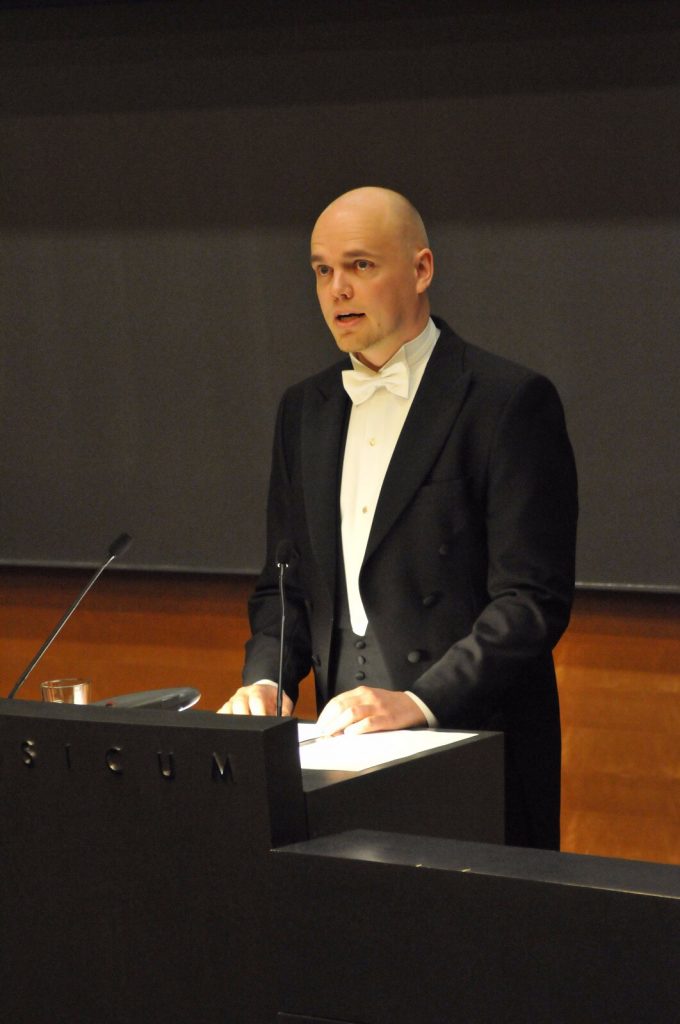 Henrikki Tenkanen defended his doctoral dissertation on 17.11.2017 with the highest possible grade!

Henrikki’s work “Capturing time in space: Dynamic analysis of accessibility and mobility to support spatial planning with open data and tools” focuses on examining how temporality affects to accessibility. Accessibility patterns are studied in the dissertation in different type of areas from urban Helsinki and Tallinn to rural Peruvian Amazonia and South African national parks.

The central aim of the work was to treat the different components of accessibility, people, services and transport network together and dynamically taking into account for example daily variations. With current approaches, temporal variations can be modelled for each component at a time or for all of them together, which shows their effect on accessibility at different times.

Another core theme of the dissertation was to highlight how important it is to consider those travel modes, which are relevant for each study area. For example in Helsinki, besides the car transportation it is also necessary to study accessibility by public transport, cycling and walking because the differences between the travel modes can be considerable.

Exploiting the potential of novel data sources was also an important part of the dissertation. The work combines openly available transportation network data to the sources revealing locations of people such as mobile phone and social media datasets.

As the new approaches to analyze accessibility are important to put into practice in urban planning, our research group has aimed to share the tools and the data, which are developed in research. Hence, the datasets and the tools, which have been created as a result of Henrikki’s work are mostly openly available (see more information from the dissertation).

The dissertation is available online here.

MSc Henrikki Tenkanen will defend his thesis “Capturing time in space – Dynamic analysis of accessibility and mobility to support spatial planning with open data and tools” in the Faculty of Science, University of Helsinki, on Friday 17th, November 2017 at noon.

The work consists of five scientific articles and a synthesis related to spatial and temporal patterns of accessibility and mobility.

Professor Rober Weibel from University of Zurich will serve as the opponent in the event.The defense is a public event, and dissertation is available online here.