The new grant is for 2.5 years and the aim is to study the effects of added biochar on growth of containerized planting stock – whether biochar application to the growing mixture would affect the growth of three main tree species (Norway spruce, Scots pine and silver birch) during the first year of growing in the nursery, and whether biochar amendment would increase the survival of plants after the planting to the field.

Obtained results will allow us to analyze if and how biochar application would affect the need for liming, fertilization and irrigation during the nursery period. We aim to provide for the public (forest practitioner, other stakeholders and general public) practical tools to improve the available afforestation practices and at the same time try to produce a new environmental supportive method.

New paper by Köster et al., (2017) is dealing with carbon dioxide (CO2), methane (CH4) and nitrous oxide (N2O) ﬂuxes from a ﬁre chronosequence in subarctic boreal forests of Canada. The long-term effects of ﬁre on the ﬂuxes of three main GHGs in boreal coniferous forest areas with underlying permafrost were investigated. Fire chronosequence consists of areas where the last fires occurred in years 2012, 1990, and 1969, and results from these areas were compared with control area that had no ﬁre for at least 100 years.

Our results revealed that the only factor that inﬂuenced all measured GHGs was the time passed from last the forest ﬁre. We also found that the impacts of a forest ﬁre on GHGs of our studied areas lasted for a rather long period of time. Soil CO2 efﬂux decreased after the ﬁre, but increased thereafter for several decades and appeared to reach its peak about 40–45 years later.

Subarctic boreal forests acted as sinks of CH4 in our study, but changes in CH4 ﬂuxes lasted for a shorter period of time as the uptake of CH4 did not differ between the area burned in 1969 and the control area. Increases in active layer depth, in our areas, did not lead to large increases in CH4 ﬂuxes.

A slight decrease in N2O emission was observed in the comparison of different ﬁre age classes, and factors that appeared to inﬂuence ﬂuxes of N2O were C and N contents of the soil, and also the depth of the active layer. 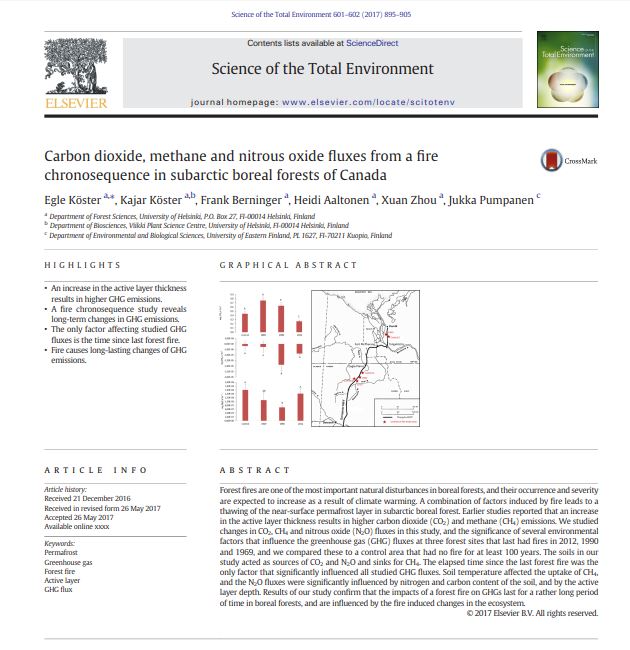