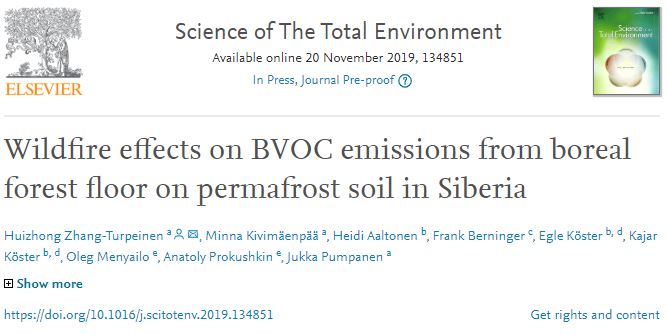 New paper by Zhang-Turpinen et al. studied the long-term effects of wildfire on forest floor BVOC emission rates along a wildfire chronosequence in a Larix gmelinii forest in central Siberia – how forest wildfires and the subsequent succession of ground vegetation, as well as changes in the availability of SOM along with the deepened and recovered active layer, influence BVOC emission rates.

The results showed that forest floor acted as source of a large number of BVOCs in all forest age classes. Monoterpenes were the most abundant BVOC group in all age classes. The total BVOC emission rates measured from the 23- and >100-year-old areas were ca. 2.6 times higher than the emissions from the 1-year-old area. Lower emissions were related to a decrease in plant coverage and microbial decomposition of SOM after wildfire. The results also showed that forest wildfires play an important indirect role in regulating the amount and composition of BVOC emissions from post-fire originated boreal forest floor. This could have a substantial effect on BVOC emissions if the frequency of forest wildfires increases in the future as a result of climate warming. 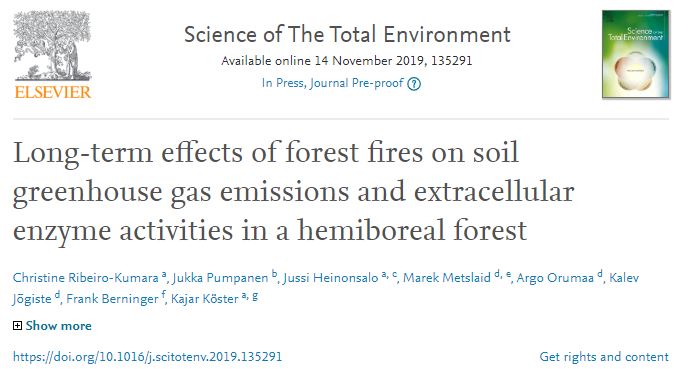 The results showed a reduction of soil CO2 efflux at the beginning of the fire chronosequence, but no changes to CH4 or N2O fluxes related to time after fire. Soil respiration responded differently to changes in soil temperature and soil moisture across the fire chronosequence. Conversely, CH4 and N2O fluxes only responded to changes in soil temperature. Recovery of soil respiration in the long term was associated with the moderate effect of fire on enzyme activity, the above- and below-ground litter C input, and the re-establishment of overstorey vegetation. Enzyme activity and decomposition inside the litter bags were especially good indicators of the role of the microbiota on the initial recovery of soil respiration prior to the re-establishment of the vegetation

Despite its limitations, the study certainly adds to our understanding of the importance and complexity of both above- and below-ground (vegetation and microbiota) responses to fire-induced changes of soil physicochemical properties for determining the temporal variability of gas exchange.