Members of the research team attended the two-day seminar on the gulag, “Gulag and Finland – History and Memory” which took place in Helsinki. The first day was consisted of open lectures in the Helsinki public library that were devoted to the experiences of Finnish deportees and prisoners in the Russian gulag. Among the invited guest speakers were Irina Flige from Memorial St Petersburg, Nicolas Werth distinguished gulag scholar from the Sorbonne, Paris and our own Judith Pallot.  Judith’s presentation, which was translated into Finnish, discussed the legacies of the gulag in the present day penal system in Russia but cautioning against the overuse of historical parallels

The seminars were followed by film showings that evening and the following day of films about the gulag. The highlight was the showing of the three-hour documentary about the gulag produced by Nicolas Werth, Patrick Rotman and Francois Ayme. 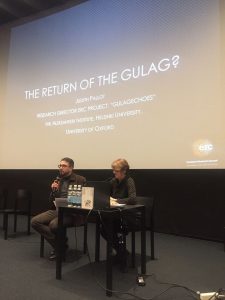