In a new article in Riddle, an online journal on Russian affairs, project PI Judith Pallot compares how the current pandemic is unfolding in Russian prisons to past epidemics in recent Russian history. The publication is available in Russian and in English. It is also partly reproduced on the project blog.

The Russian prison system is no stranger to epidemics. Faced with COVID-19, Russia has had a wealth of experience to draw upon. In this blog, and following on from the history of the response to epidemics in the Russian prison system in 19th and 20th centuries, Judith Pallot brings the story up to turn of the millennium, by speculating on the lessons today’s Prison Service might have learned from the most recent past.

At the beginning of the current crisis, fears were expressed that prisons would become becoming “epicentres” of COVID-19, but, as of now, the data are not available to assess prisons’ role in spreading the disease in the countries most affected by the disease.  One problem is that penal authorities are notoriously reluctant to open their doors to scrutiny, none more so than FSIN, the Russian Federal Prison Service in control of the country’s approximately 1000 penal facilities. Since the beginning of the crisis, FSIN has been more than usually secretive.  Its reporting on the pandemic has stressed that everything is under control and that rates of infection are low. In this storyline, the principal health risk in prisons is not to inmates, but to personnel,  who are on the front-line of protecting the public against the spread of the virus. The few statistics that FSIN has released support its interpretation. The latest official reports from 1 October show 1465 prisoners have tested positive for the virus (out of a total prisoner population of half a million).  A FSIN doctor interviewed in Rossiyskaya Gazeta insists that nobody died, except one person. That individual, the doctor noted, died of a pre-existing condition which was apparently exacerbated by COVID-19. NGOs and prisoners’ advocates, however, express scepticism about FSIN’s reporting.  The toll, they estimate, is far higher. NGOs and prisoners’ advocates express a high degree of scepticism about FSIN’s reporting.

The collapse of the USSR in 1991 presented the successor state with new challenges in dealing with health issues in its prisons. As we have previously learned from previous blog posts on the GULAGECHOES website, humanitarian concerns about the health and welfare of the prisoners have rarely been the sole priority of Russian penal authorities; prisoners’ fitness for hard labour, anxieties about superiors’ censure  and broader public health anxieties have dominated  over the health and welfare of prisoners.  The Russian Federation’s membership of the Council of Europe and ratification of the European Convention on Human Rights in 1998 changed this, bringing prisoners’ rights issues to the surface in all policy decision-making. Henceforth, whatever practical measures the Russian prison service might take to control epidemics in its penal facilities, these would have to be consistent with respect for prisoners’ rights. Article 3 of the ECHR – the prevention of torture, inhuman and degrading treatments and punishments – is absolute and non-derogable, meaning that there are no exceptional circumstances that a state can call upon to justify using measures that undermine prisoners’ rights. Thus, Russia is unable to justify undermining prisoners’ article 3 rights on the grounds that it is  protecting the general public. Containing the COVID-19 pandemic in ways that do not inflict additional harms on the prisoners in their care is a difficult task for any prison system, but in Russia that challenge is exacerbated by the distinctive penal architecture, management practices, the power of penal subcultures, and the geographical and physical structure of the prison estate. This can be illustrated by the epidemic of multi drug-resistant tuberculosis (MDR-TB) that spread like wildfire through prisons and into the general population of the newly created Russian state in the late 1990s and early 2000s.

Conditions in 1990s Russia created a perfect storm for the reversal of forty years of successful Tuberculosis control. Economic collapse and its associated ills – poverty, alcohol consumption and drug trafficking – and the disintegration of the health system combined to spread the disease.  As crime levels soared, taking the Russian Federation to the top of the world rankings for the rate of imprisonment, prisons became the site of the disease’s reproduction and dissemination. Pre-trial detention centres (SIZOs) were filled with people drawn from the growing population of alcoholics, the homeless, mentally ill and drug addicted.  These prisoners, the majority already with compromised health status, were crammed into poorly ventilated, crumbling cells in the SIZOs and held there for  23-23.5 hours a day.  Food was in short supply, prisoners had to share bunks or sleep on the floor and prison medical services barely existed.  Tuberculosis thrived.  Following conviction, prisoners were transported in packed railcars, often passing through transit prisons, to correctional colonies, spreading the infection across the vast prison estate.  At their destination, prisoners were assigned to communal-dormitories where they slept in closely packed bunk beds.  For the duration of their sentence, they lived cheek-by-jowl with other prisoners, eating, sleeping, exercising, labouring and falling ill, together.  At every stage of the journey from arrest to release prisoners were exposed to Tuberculosis. Infection rates in prisons at the epidemic’s peak topped 4000 per 100 000 prisoners,  and in some regions the rate reached a staggering 7000 per 100 000.[5] 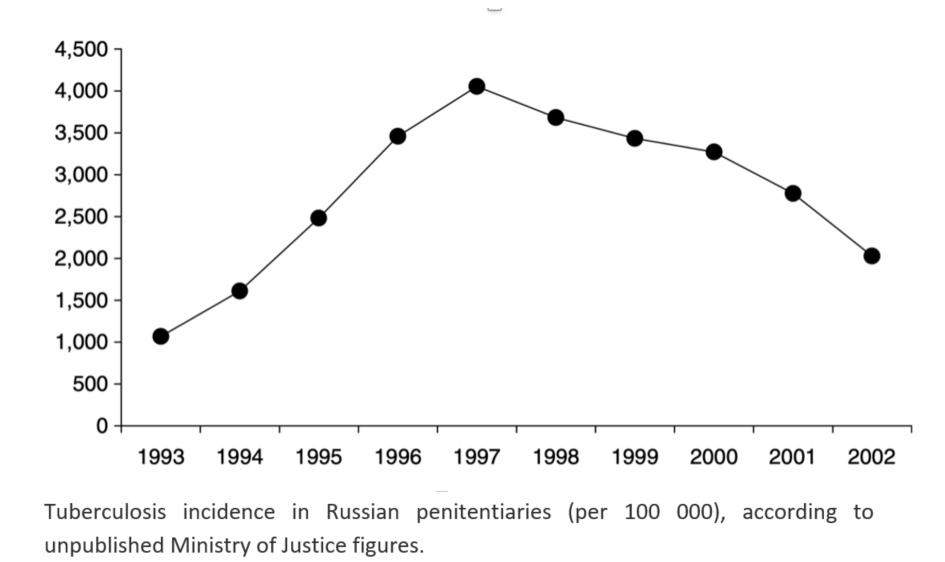 The healthcare provider for prisoners in the Russian Federation, as in Soviet times, is embedded in the Prison Service and is entirely separate from the civilian Ministry of Health. There is a network of prison hospitals, surgeries and dispensaries located in penal facilities, but the quality of treatment has always been poor and remains so to the present day.  In the 1990s, these problems were particularly acute because of the crisis in the penal economy. The Prison Health Service was just not up to responding to the Tuberculosis epidemic.  Medicine shortages and a failure to complete drug treatment meant that many prisoners died, with the 25% of prisoners contracting the multi-drug resistant strain of the disease, the most vulnerable.[6] By the time the disease began to be brought under control in the 2000s, thousands of inmates had died from the disease, at a rate that was far in excess of mortality in the population at large.[7] 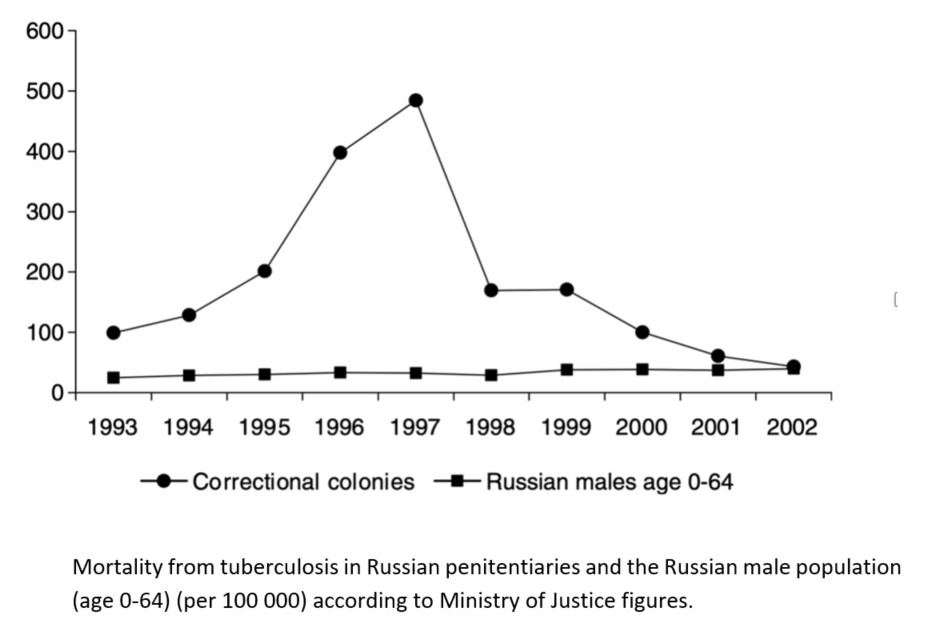 If the particular conditions in which prisoners were held encouraged the spread of Tuberculosis throughout the prison estate, the release of thousands of infected prisoners without a post-prison treatment plan guaranteed that the disease spread into the wider community.[8] Behind bars, prisoners with TB could be forced to take medication, but once they were released, they could stop because they felt better or had no access to repeat prescriptions. Prisons throughout the former communist countries were identified as the principal ‘epidemiological pump’ for the resurgence of Tuberculosis across Eurasia.  One particular study, led by an economist from Oxford University, used longitudinal analysis to examine whether, and to what degree, post-1989/1991 incarceration rates accounted for differences in population TB and multidrug-resistant TB burdens in different countries of the post-communist world.[9]  The study found that net increases in incarceration accounted for a 20.5% increase in Tuberculosis incidence, or nearly three-fifths of the average total increase in TB incidence, in the decade after communism’s collapse. More controversially, the study laid the blame for the resurgence of the disease on IMF rescue packages for neoliberal economic reform. [10]

The Tuberculosis epidemic in Russia attracted global media attention.  Rather as China has been identified, and blamed by president Trump, as the source of the COVID-19 pandemic in 2020, the post-communist countries of East Central Europe and the former Soviet Union were identified in the 1990s as a MDR-TB pandemic threat to the industrialised countries of Europe and the USA.  Newspaper headlines warned of Tuberculosis spreading from “the East”. Scandinavian countries were in the front line of defence when Russian migrants were found responsible for a spike in cases of MDR-TB in Sweden.  The WHO scientific officer stationed in Sweden warned that the threat was not just to the Scandinavian countries,  but that the  “elevated risk has to apply to all Western European states and to other low-incident countries like the USA”.[11]  The health panic in neighbouring countries faded, but in 2014, the WHO returned to the threat,  again pinpointing migration from Russia as potential risk factors for the spread of MDR-TB in Europe.[12]

The end of the epidemic?

In the first decade of the new millennium, the Russian Federation managed to bring the Tuberculosis epidemic more under control, which it was able to do largely because of collaboration with the World Health Organisation in the modernizing of Tuberculosis diagnostics and treatments and financial support from the World Bank.[13] The past decade has seen the decline from the high infection rates at the turn of the millennium. The reported infection rate in the general population now hovers around 45-50 per 100 000 and since 2012, mortality from Tuberculosis in the general population has declined by nearly one half.[14] These declines have been mirrored in the prison estate, a consequence of investment in Tuberculosis detection and treatment and specially-purposed medical-isolation colonies (LUY). A halving of the number of prisoners, with consequential easing of overcrowding, and repair and new builds of detention facilities, have also played a role. However, a 2-3-year custodial sentence still means that a prisoner will almost inevitably contract the disease. One 2017 study has shown that every tenth prisoner in the Russian Federation has an active form of Tuberculosis and the majority of prisoners carry it in latent form.  MDR-TB kills more than 2000 prisoners a year, and prisoners with active tuberculosis coming to the end of their sentences still circulate the disease back into the community.  Meanwhile, in the reverse movement the ever-growing numbers of intravenous drug-users arriving in prisons are especially vulnerable to picking up Tuberculosis.  Co-infection of HIV-AIDS with Tuberculosis is now the primary killer of people testing positive for HIV.

The metaphor of the “bear trap” has been used to describe the way that both Tuberculosis and HIV-AIDS have been forced together in the Russian prison, with lethal consequence for the trap’s “permanent residents” to the extent that the talk now is of new epidemic in Russia’s prisons.[15]   In the early part of 2020, a new virus fell into the trap in the form of the SARS CoV-2, the full consequences of which will only become clear at some point in the future.

If FSIN is to be believed, the fear that prisons would become a vector of COVID-19 have not been realised.  There are many possible explanations for this, one of which is that the system may have learned from past mistakes. I am sceptical, but I conclude this blog with a review of the lessons from the Tuberculosis epidemic in prisons that might have been taken in account by FSIN in shaping its response to COVID-19:

On balance, and even taking account of the ‘positives’ in the list above, FSIN’s insistence on low infection rates among prisoners and zero deaths seems to me implausible. I hope that I am mistaken.

Please see the original version of this post in Riddle, an online journal on Russian affairs, available in Russian and in English.

[1] The first figures consolidated figures were released for April gave  271 and 40 for personnel and prisoners respectively. The figures for 25th May have been variously reported as  980 or  617 for personnel and 238 or 145 for prisoners.

[6] https://www.researchgate.net/publication/23992204_Prisons_and_the_tuberculosis_epidemic_in_Russia  The development of multi-drug resistant strains is an unintended and inevitable consequence of anti-biotic (TB) drugs and incomplete treatment programmes.

Proceedings of the National Academy of Sciences Sep 2008, 105 (36) 13280-13285; DOI:10.1073/pnas.0801200105. Among the other findings Differences in incarceration rates are a major determinant of differences in population TB outcomes among eastern European and central Asian countries, and treatment expansion alone does not appear to resolve the effect of mass incarceration on TB incidence

[13] However, this was in the face of opposition from the existing medical establishment that had been responsible for the Soviet era management of Tuberculosis. https://www.who.int/bulletin/volumes/84/4/news30406/en/