The Academy of Finland has awarded a grant to Judith Pallot for a project that has strong synergies with GULAGECHOES. It is entitled: “Yugoslavian “Penal Nationalism” and the Politics of Punishment in the Contemporary Western Balkans: Testing the Limits of the European Human Rights Regime in the EU’s Southeastern Neighbourhood”.  The project will employ two post-doctoral fellows; Dr Brendan Humphreys, a political historian,  who is well-known in the Aleksanteri Institute, and Dr Olga Kantokoski, a political sociologist,  who will migrate to the Aleksanteri from the Social Science Faculty. The ‘Balkans project’ starts on 1st September 2021, but cooperation between the two projects began today with a joint meeting to identify common interests going forward. 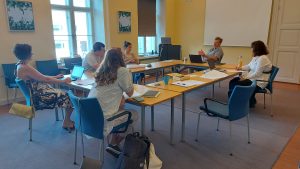