In this blog, I adduce that neglect of the regional camp archives in conjunction with uncritical trust into the central records could seriously vitiate our understanding of GULAG mortality statistics. To corroborate this thesis, I use the local documents of Siblag corrective-labour camp for 1933, published by historian S.A. Krasil’nikov, to show that quantitatively significant number of people listed as escaped in its reports in reality died. However, a succinct historiographical overview is needed to articulate the issue coherently.

Thanks to the towering authority of Viktor Nikolaevich Zemskov, a pioneering scholar of GULAG statistics, Russian scholarship (with a few exceptions) internalised a somewhat uncritical view on the reliability of the penal statistical data, published in the beginning of the 1990s after the partial opening of the Soviet archives.[1] If the “pre-archival” period of its research suffered from excessive trust in dubious, exaggerated extrapolations, derived from narrative sources (e.g. memoirs of former prisoners), many scholars of the “Archival Revolution” era fell victim to peculiar “archival fetishism”. Several prominent authors (including V.N.Zemskov, Iurii Nikolaevich and Mikhail Iur’evich Morukov and several others) began to absolutize and even idealize the declassified summary statistics, discovered in the central GULAG archive.[2]

The cover of the archival file with central summary statistics, GA RF. 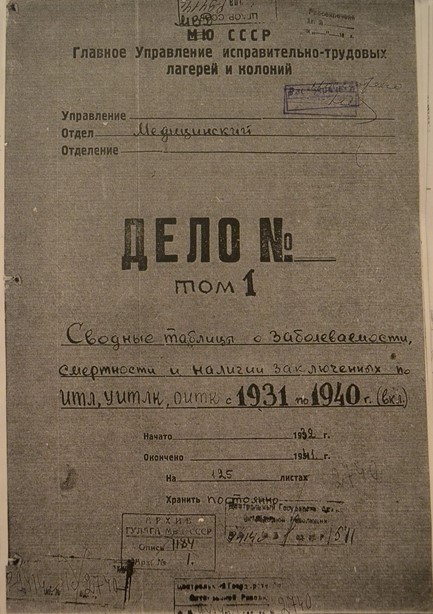 For example, Zemskov qualified the central reports as “absolutely precise”.[3]  In another instance, he claimed that  “there was rigorous order in NKVD system, recordkeeping was exemplary, the officers were made responsible for every prisoner: alive, sick, in the punishment cell, in the infirmary, dead-all this was taken into account very precisely by the internal statistics of the agency’.[4]

What was the evidentiary base underpinning such adamant claims? Essentially, an assumption about hypothetical “rigorous order” of the NKVD accounting. At the same time, Zemskov never attempted to verify the reliability and completeness of the central statistics by comparing the summary Moscow reports to primary data in the regional archives, which were considerably more open throughout the 1990s and the early 2000s (unfortunately, not anymore).[5]

In his polemical refutation of demographer Sergei Maksudov’s critique, V.N. Zemskov substantiated his belief in the veracity of the central summary figures of the Special Settlers’ Department of GULAG OGPU-NKVD with the following argument,

By the standards of the time, the quality of the accounting was sufficiently high, because the deported kulaks (rich peasants – M.N.) were considered to be “a supervised contingent” (podnadzornye), and their accounting was considerably more rigorous and scrupulous than that of regular civilian population…The employees of ZAGS  system (civil registration) did not bear any responsibility for understatements, but, conversely, the commandants of the special settlements could be not only reprimanded, but accused of illegal aiding to the “kulak element”, which could cause them quite unpleasant consequences. Commandants of special settlements were really keen on eradicating all underreporting (of the data).[6]

If in the early 1990s when the data was just published, it would be certainly unfair to criticize Zemskov for not re-checking the central statistics – which were a crucial contribution at the time, correcting exaggerations of “pre-archival” scholarship (e.g. Robert Conquest). Nevertheless, 22 years later Zemskov reiterated exactly the same debatable justifications about the data ostensible veracity in even more self-assured manner.[7]

In one of his latest monographs “Stalin i narod” (2014) Zemskov contended:

Regarding those who died in the “kulak exile” between 1932 and 1940 we have exact statistics – 389, 521 people…At the beginning of 1932, “kulak exile” accounted for more than 1.3 million special settlers, whereas slightly more than 1.8 million were deported there during 1930-1931. Consequently, the diminution (ubyl’) comprised 0.5 million people. Documents do not contain a breakdown of components for this diminution. Undoubtedly, the main components were escapes and deaths. Moreover, as a rule, quantitatively, the escapees occupied the first place, and the dead were in the second place.[8]

Let us note that for Zemskov “escaped” and “dead “categories in these allegedly “exact” data are completely separate and uncorrelated with each other. Moreover, fear of retribution for misinformation and providing the faulty data to Moscow incentivized local GULAG statisticians to be – putatively – rigorous and conscientious in their recordkeeping. However, the analysis of the demographic outcome of the notorious Nazino Affair, which occurred in Western Siberia in spring-summer of 1933 allow us to critically re-asses, qualify and revise such statements.

Extract from Order No. 141 for Alexandro-Vakhovskaia commandant’s office of the Siberian corrective-labour camp (Siblag) of the OGPU, June 29, 1933. 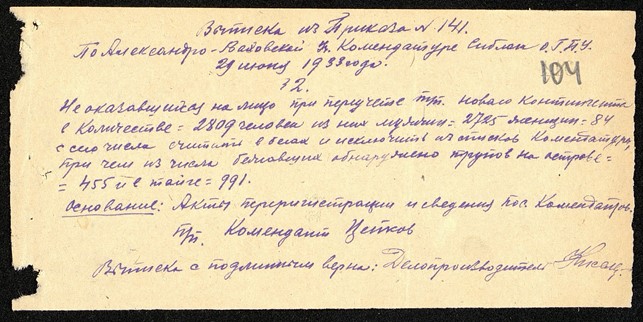 Those who did not appear during the re-count of labour settlers’ new contingent in the amount of 2809 people, of whom men comprised 2725, women –  84 from now on should be considered as escaped and excluded from the lists of the Commandant’s office, moreover, among those who run away, corpses were discovered on the island – 455 and in the taiga – 991.

Reference according to the registration of labor settlers of the Alexander-Vakhovskaia District Commandant’s Office of the Siblag camp of the OGPU on September 20, 1933 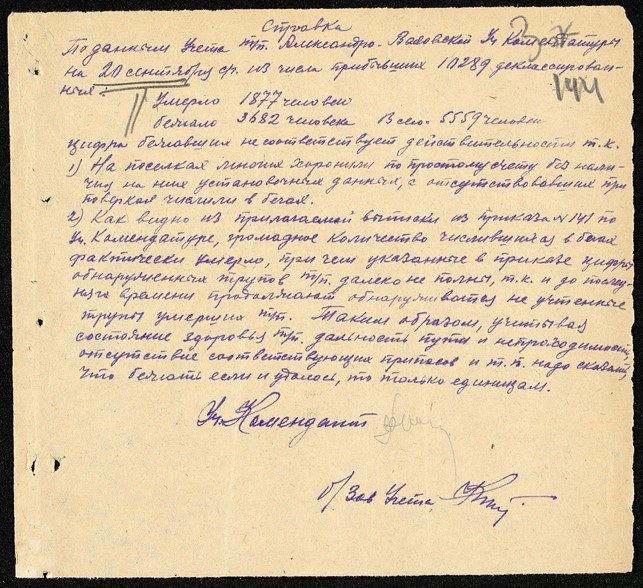 The number of the escapees does not correspond to reality because

1) In the settlements, many were buried just after simple counting procedure without any proper personal particulars’ data, while during checks listing the missing as runaways.

2) As it is seen from extract of Order №141 of the District commandant’s office, a huge number of listed as escaped factually died, although the stated number of discovered corpses is very incomplete, as even recently the yet uncounted bodies of the labour settlers continue to be found. Given the health condition, the distance and impassable terrain, lack of appropriate supplies, it is needed to say that if someone managed to escape successfully, they were only a few.

In summation – a significant proportion of those who were registered as runaways from Aleksander-Vakhovskaia commandant’s office of Siblag (thousands), in fact, died from starvation and exposure in the wild.[9]

These data reaffirm old source-stud truism– a blanket trust in the reliability of the documents produced by central authorities without critical collation with the primary materials of lower administrative tiers distorts scholarly “optics”.

Last but not least, escapes hardly constituted the main source of understatements for yet uncounted GULAG-related deaths. The most important statistical factor that supressed registered mortality was medical release (so-called “aktirovka”) Terminally ill invalids, discharged early on medical grounds, died soon after release, but camp doctors deliberately excluded these fatalities from medical registries to create a success story for internal reports.[10] If one day access to local GULAG archives improves, assiduous scholars would be able to piece together and factor in all these understatements (escapes, medical releases and several others). Then, we certainly will arrive at a higher number of GULAG-related deaths than the central statistics, published in the early 1990s, indicated.

[9] Back in 1996 Stephen Wheatcroft presciently proposed “a maximum camp death rate”, which “includes recorded deaths, uncaptured runaways and disappearances in transit. Not all of these categories would cover deaths, but many would”. See Stephen Wheatcroft, “The Scale and Nature of German and Soviet Repression and Mass Killings, 1930–45”. Europe-Asia Studies. 48 (8), 1996, 1337.