Dr Larisa Kangaspuro, a researcher whose historical study in the project focuses on Ethnicity in the Imperial Russian prison system after the Great Reforms, visited the National Archives of Georgia in July-August 2022. Georgia was part of the Russian Empire from 1801 to 1917. Then it was Tiflis and Kutaisi provinces. Many different nationalities and different faiths inhabited the territory of the modern Georgia. Within two weeks, documents generated by both state prison authorities and civil society organizations were discovered, for example, official correspondence from the Imperial Main Prison Administration (the GTU) in St. Petersburg with the Tiflis Governor or reports and personal correspondence from the head of the Ladies’ Committee of the Society for Prisons. These previously unpublished documents allow clarifying the issues of ethnicity and interethnic relations in prisons on the outskirts of the Russian Empire from the second half of the 19th to the beginning of the 20th centuries. 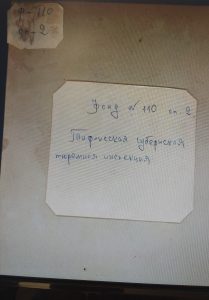