In the later part of the Second World War in 1940-44 Finland had close ties with Nazi Germany, even though there was no formal alliance between the two countries. German troops arrived to northern Finnish Lapland as part of Hitler’s Operation Barbarossa,
the attack on the Soviet Union. While effectively allying itself with Germany, Finland was eager to maintain the impression of two separate wars against the Soviet Union, and tried to avoid conflict with the other Allies, especially the United States. Great Britain, however, declared war on Finland in 1941.

At the peak of the German military buildup there were more than 200,000 German soldiers in Northern Finland. Germans officially took some 9,000 Soviet Prisoners-of-War (PoW) on the northern front, and brought ca. 20,000 prisoners more to Finland as a workforce. Germans established over a hundred temporary PoW camps, punishment camps, and work camps in the northern half of Finland; the Finns also established some twenty camps in the area.

Spatial distribution of the German-run and Finnish-run PoW and forced labour camps in 1941-1944 is shown in the map below, based on Lars Westerlund‘s historical studies (Westerlund, L. 2008: Saksan vankileirit Suomessa ja raja-alueilla 1941–1944. Tammi), field trips by the Lapland Military Historical Society and our own pilot field research in 2007-2014 (click the map to make it bigger): 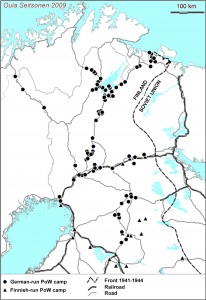 The close Finno-German relations ended with the Lapland War in 1944-45 after Finland had made a cease-fire treaty with the Soviet Union and was demanded to drive out the German troops. The German troops resorted to scorched earth tactics during their retreat to Norway, which resulted in the so-called ‘burning of Lapland‘.

For more information see for example: