Dr. Iain Banks from Glasgow university attended the open excavation in Inari with us this summer. He already dazzled us with his knowledge (and his accent) in this video, and now he was kind enough to write us a piece about how he remembers experiencing Finnish Lapland. 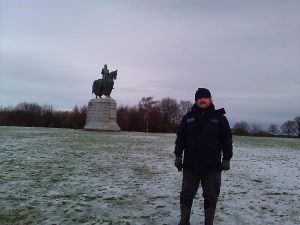 This summer, I found myself in a place that was both familiar and very strange to me.  I was standing in a forest in Lapland, far to the north of the Arctic Circle, with my field of vision cut down to a few feet by the density of the forest. The familiarity came from the vegetation and landforms. Lichens grew everywhere, and the ground cover was a mixture of mosses and berries. The trees were pines for as far as could be seen. This was so familiar to someone who has spent as much time as I have in the Highlands of Scotland.  We don’t have as rich an array of species of berry as Lapland, but the lichens thrive as well, the damp conditions keep the mosses as dominant as in Lapland, and I could almost believe myself to be in a forest at home.

There is also a similarity in terms of the human landscape.  While we don’t have reindeer herders, we have traces of the Second World War scattered across the Highlands.  We have training camps, PoW camps, and forestry camps slowly decaying into the landscape, disappearing under the mosses and lichens amidst the trees. I was in Lapland as part of the research project Lapland’s Dark Heritage, come to see Lapland’s PoW camps and participate in the excavations at Inari.  Further north than I had ever been before, in a country that I had never previously visited and whose language is a closed book to me, the combination of environment, archaeological material, and the warm welcome of colleagues made me feel completely at home.

During my time in Lapland, I learned a huge amount about the history of events, about which I’d previously had a hazy notion of plucky Finns holding back the Russians in the North. In particular, I’d never heard about the burning of Lapland.  I was able to share my experience as a field archaeologist in helping the volunteers to learn the basics of excavation, and to share some of my research into PoW camps further south in a public lecture.

We excavated elements of a hospital site just outside the town of Inari, working with a group of Finnish volunteers, and forming a truly international group of English, Scottish, Brazilian, and Finnish academics probing the heritage and impact of the war in Lapland.  Still smarting from the Brexit vote, it was heartening to work with my European colleagues and plan future collaborations that will endure whatever the politicians decide.  A small taste of that came with the recent visit of Eerika Koskinen-Koivisto to the University of Glasgow, and we hope to expand links between Glasgow, Helsinki, and Oulu in the coming years.  Lapland’s Dark Heritage is a tremendous project, and I have really enjoyed being involved in it; I will be returning for as long as the project will have me.

I started by talking about the familiar; the biggest difference was night time. We have long hours of summer daylight and short winter days, but it is less extreme than in Lapland. Standing on the edge of Lake Solojärvi at 2 am photographing the mist on the surface of the water was an experience I will always remember.  I have travelled far and wide across the world, but Lapland has been one of the best experiences I have had. 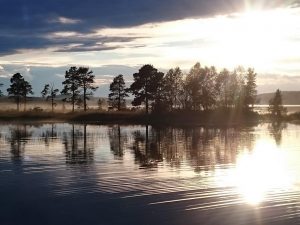 Lake Solojärvi. Taken by Dr. Iain Banks in the summer of 2016.