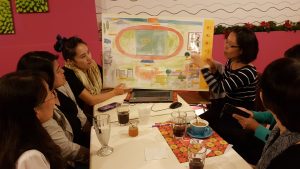 In Taiwan children spend time outdoors on average only 29 minutes a day and they are highly physically active only 23 minutes a day. In several pre-schools, the teachers have chosen as their development task increasing  both outdoor activities and physical activity. In the picture there is a map of the pre-school yard. Before children go out,  the map and outdoor possibilities are discussed with children to enrich children’s ideas. The time of outdoor activities has been extended from 30 minutes to one hour. Both children and teachers feel good. The weather is hot and the children sweat a lot! All teachers are outdoors together with children. After washing up children come indoors and the map is used again to deepen the experiences. In the photo, teachers of the group share their experiences with the teachers of other pre-schools and new ideas are developed. For example, the heavy rubber tiles that have been removed may not be thrown away, they can be used in building, math and exercise. The map can be left on floor for children to play and deepen their outdoor horizon. 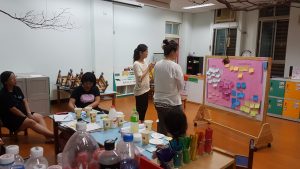 In Taiwan, the pre-schools have been using the results of the 2015-2016 data collection in their development of the activities. The development model is Riverplan. In the picture, the teachers are planning to increase the support of play. In the Riverplan, north bank is for the opportunities and the south bank are the dangers of the trip. In the river there is the process. First we have to make a good map of the environment we are about to travel. Then we need to clarify what tools and skills we need for a successful journey. Furthermore, in a meaningful trip the differences and personal interests need to be considered if we want the trip to be meaningful for everybody (participation). Finally, we need to consider how we can share our fruits of the trip for everybody to enjoy.

The book Contemporary Perspectives on Research on Bullying and Victimization in Early Childhood Education has just been published. The book includes our article Openness and Agency as Strategies for Addressing Bullying. The authors are Jyrki Reunamo, James Ko, Doris Cheng, Hui‐Chun Lee, Li‐Chen Wang, and Essi Salminen. The yearbook is an essential reference in Early Childhood Education research. This is a major recognition for the work and research of our project. Our article presents a rare perspective on children’s strategies to confront bullying. We also see how these strategies are reflected in the everyday activities and interaction. The book can be bought online at the Information Age Publishing’s website.  The direct link is: http://www.infoagepub.com/products/Contemporary-Perspectives-on-Bullying-and-Victimization-in-Early-Childhood-Education.

We have used several different instruments in our data collection. Several of them we have produced by ourselves (the observation instrument includes involvement scale developed by Laevers 1994). According to the principles of open access we provide them for viewing for the research community. However, the copyright of the instruments belongs to Orientation project, which is directed by Jyrki Reunamo. If you are interested to use the instruments in your research, please contact Jyrki Reunamo at the University of Helsinki.

In addition to the instruments described above, we have used tests for reading and writing readiness, math skills, creativity, balance skills, motor skills, stress level testing (cortisol and alpha amylasis) and physical activity monitoring with Polar activity monitors. The original instruments of Observation and Child Evaluation were developed in 1997 (see Reunamo 2007). They were further developed with the help of the Taiwanese team (especially Hui-Chun Lee, Li-Chen Wang and Rosalind Wu, see https://blogs.helsinki.fi/orientate/taiwanese-team/). The original learning environment was developed in 2004 based on the City of Helsinki data (thank to Seppo Sarras) and enhanced during several rounds of quality evaluation with the help of the municipality participants (especially Merja Kivistö, Helena Nurmi, Taija Pölkki, Heli Söderqvist, Kati Timo, Merja Hietala, Marita Käyhkö, Petra Salomaa and Vesa Joronen) between years 2010-2015. The Leadership evaluation was developed in 2014 with the help of Marja-Liisa Akselin and Ulla Soukainen (thank you for Timo Järvensivu).

Our article based on Orientation project data has been accepted for publication in the series Contemporary Perspectives in Early Childhood Education http://www.infoagepub.com/series/Contemporary-Perspectives-in-Early-Childhood-Education. The series is globally perhaps the most important yearbook on Early Childhood Education. The publication is a major recognition of the work we are doing in our project. In the article we study bullying from the perspective of learning, which is a new opening in the study of bullying. Learning often helps to process bullying, but in can also result in confrontation, withdrawness or attempt to accept the bullying as a fact. It is also possible that the child learns nothing in the bullying situation, which means that nothing changes. Luckily, as children grow, the bullied child gets perspective and agency to process the situation, but unfortunately some children face a dead end. Article info: Reunamo, J., Ko, J., Cheng, D., Lee, H-C., Wang, L-C. & Salminen, E. (In print). Openness and agency as strategies on addressing bullying. In O. Saracho (Ed.) Contemporary research on bullying in early childhood education. IAP Publishing: USA. 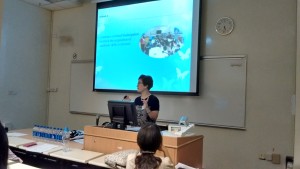 At the 2015 Quality Childhood Conference International (QCCI) at 19th June in Hong Kong, an Orientation project symposium was organized. Presenters from Hong Kong, Finland and Taiwan described the project results. In the picture conference chair Doris Cheng presents the differences in children’s orientations at play-based and academic preschools in Hong Kong. The presentations were:

The conference was also a great place for networking and synchronization of the project. Special thanks for Doris Cheng for the opportunity. 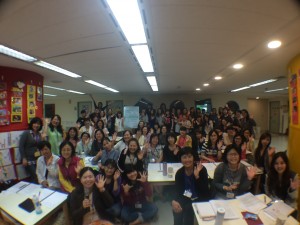 The first training workshop was completed in New Taipei city on 19 April 2015. There were 57 teachers participating in the workshop. The data collection looks very promising. 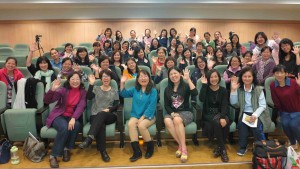 The first training workshop was completed on Saturday 11 April. There were 57 teachers from 20 preschools joining the project in the East area. The workshop starts at New Taipei City on 19 April. Click on the pictures to get them larger! 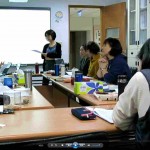 In Taiwan the observation is from September to December 2015. In every country the observation training is based on same video examples, which have been coded in a similar way in Finland in August 2014. Finnish and Taiwanese researchers sat long hours at the same table looking at the same videos working for a shared understanding of the observed items. With this arrangement we made sure that the researchers in Finland and Taiwan could see the situations in a similar way. Then we use these definitions in the observation training. With this arrangement we seek to make the comparison across countries as accurate as possible. The observers see the same activities and discuss the same definitions. The picture on the left is from the Chung Gung University training for the New Taipei City observers. The picture on the right is from the training in Eastern Taiwan. Click on the pictures to see them larger!