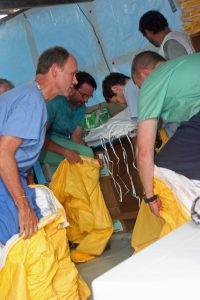 During the last 15 years, we have been facing regular pandemic threats and declarations of emergency. In 2003, SARS emerged in Hong Kong and was dealt efficiently by the World Health Organization (WHO). 2005 saw the rise of Avian Influenza as a great concern which has yet to materialize. In 2009, the H1N1 Influenza, sometimes called swine flu, originated in North America. This time WHO received strong criticism for the way it handled the situation. In 2013, MERS-CoV, a similar virus to SARS, started to be detected in the Middle East and, even though the situation has not gotten out of the region except for a small outbreak in South Korea, the situation is surveilled closely. 2014 was the start of the biggest Ebola outbreak until now, and recently, Zika became the most novel threat to global health.

Governments and international organizations have been investing more and more funds towards preparing for such biological threats. Besides these natural outbreaks, these programs generally include other sources such as bioterrorist attacks or biosafety accidents as the result of working with genetically modified viruses in laboratories. As these different threats are tied together, the strategies, the knowledge and the implementation practices in front of them change too.

In my thesis, I have been analysing public documents from national governments and international organizations. In addition, I have been interviewing international experts on the topic and reviewed scientific news regarding pandemic threats. Inside that material, I have looked for descriptions of how new knowledge on these biological threats is created. I continue to look at how that knowledge goes on to inform new strategies and medical countermeasures to deal with those threats and, finally, how once a pandemic emergency is declared, those new ways of fighting pandemics might affect and alter different forms of life, from human populations to animals or even viruses themselves.

What is interesting about this topic is that, as these threats are considered latent, governments and institutions attempt to create governmental tools to deal with them before they happen or even are identified. At that stage, all threats are considered equally despite differing characteristics such as cause, source or infectious agent. The new strategies take these features into account and, as a result, aim at intervening in new spaces and earlier in time as they try to tackle all threats at their source, before they grow enough to be global threats.