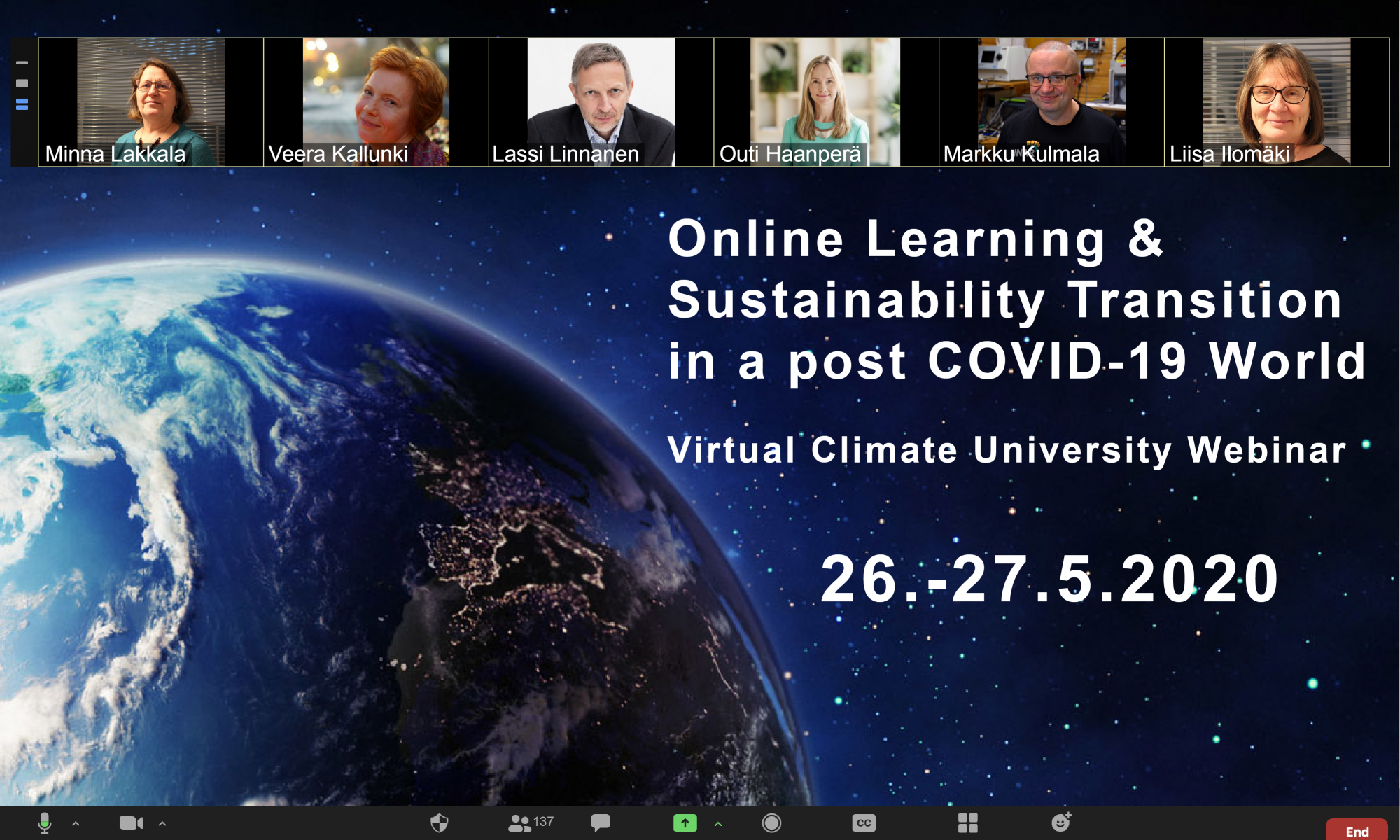 We held our first CU webinar a few weeks ago on Tuesday and Wednesday 26.-27.5. It was a success! Here’s a recap of our first Virtual Climate University.

The webinar started with a simple instruction. We put a link to our Digicampus platform, where all of the information and content of the webinar was gathered, which lead to a Flinga wall. The instruction was this: “Go the Flinga, create an avatar and type your name, organisation and inner super hero of today.” The Flinga wall was a map of the world so we then instructed everyone to place their avatar wherever they felt like their superhero was from. Here you can see the result. 🙂 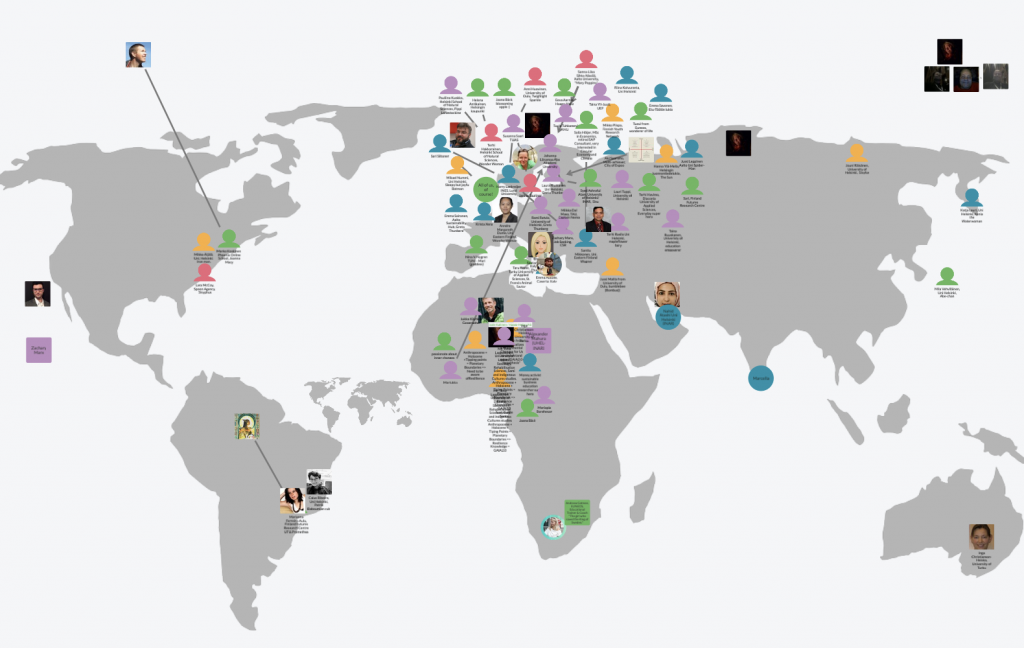 After the superheroes we continued to the official opening words of the webinar, which were given by academic Markku Kulmala. Then Laura Riuttanen introduced Climate University and Katja Lauri the ABS network. The warmups were done. It was time to start our first workshop. 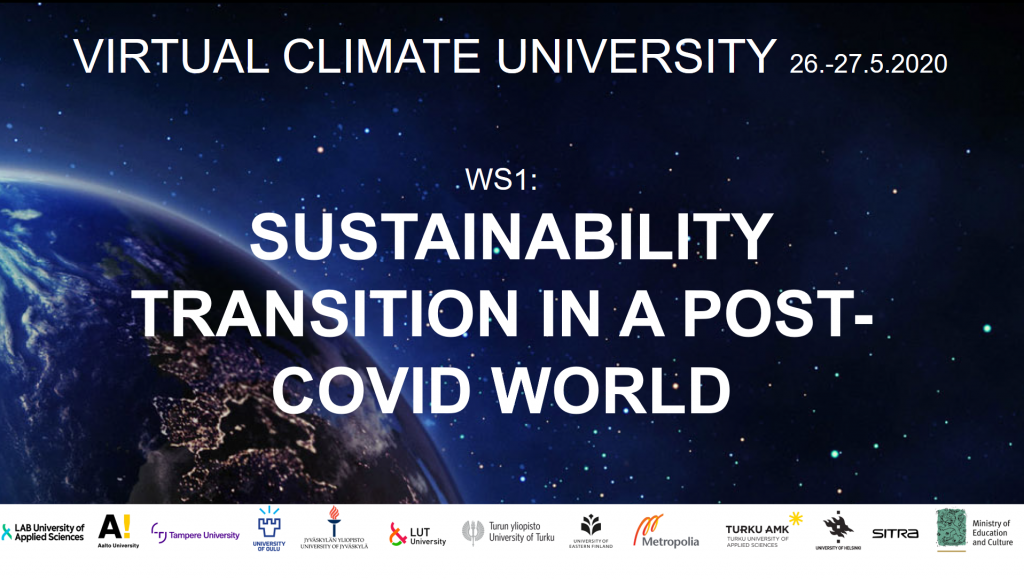 The first workshop started with our two keynote speakers Outi Haanperä from Sitra and Lassi Linnanen from LUT-university. Outi focused on the economical side of the possible sustainability transition and Lassi on much needed system-level change. After these amazing keynote speeches there was a workshop hosted by Anna Kirveennummi and Morgan Shaw from Finland Futures Research Centre, University of Turku. The workshop was focused on the question “How can we learn about sustainability from the disruptions caused by the COVID-19 pandemic?”, and it featured a poll at the start. The results were then discussed at the end. 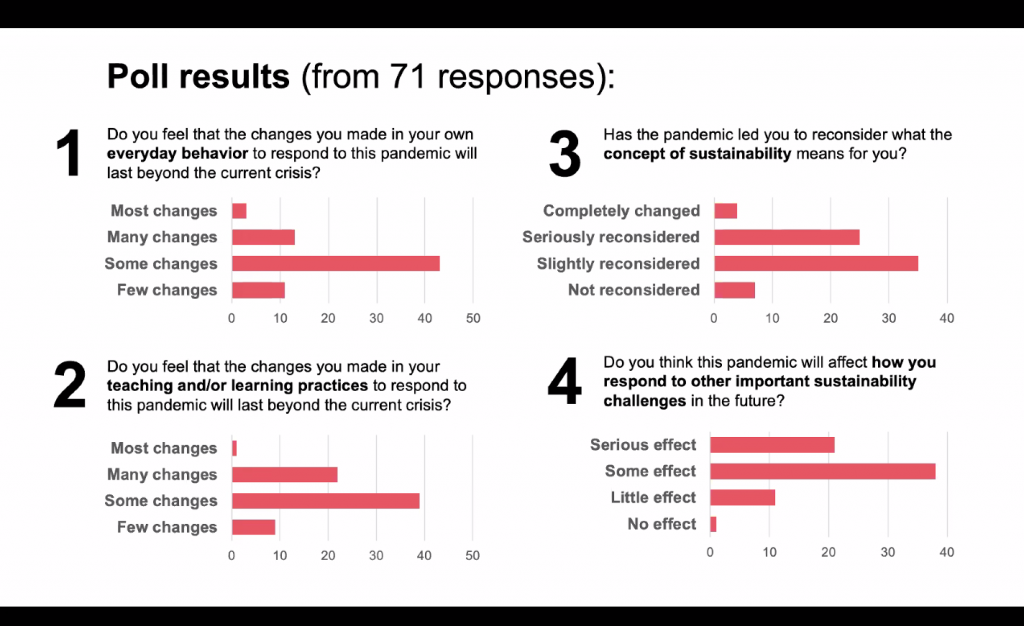 We then ended the first workshop with a little meditation hosted by our “guru” Laura. ?

During this corona virus episode we have realized that sitting in a Zoom meeting 6-8 hours in a row is surprisingly exhausting. Thus we wanted to assure that the breaks are long enough for both the participants and for us hosts. We had a one hour break after the first workshop and a 45min break between the 2nd and 3rd workshop. 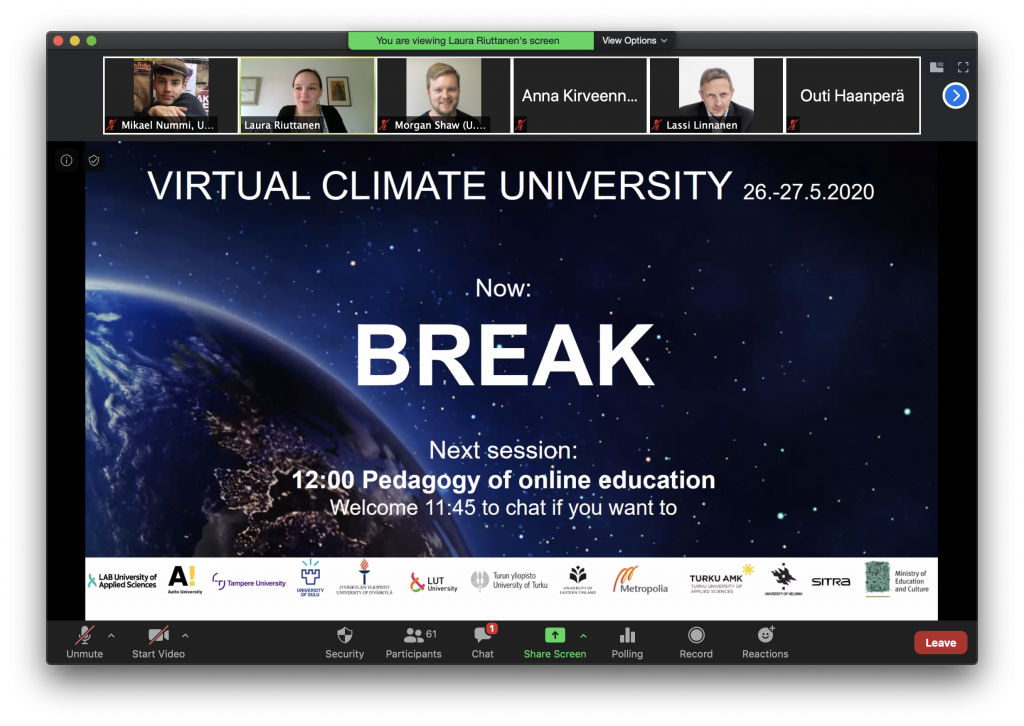 The second workshop started with the introduction of our CU courses. Then Liisa Ilomäki and Minna Lakkala from the University of Helsinki shared their views on the pedagogy of online education. Next Sari Puustinen from the University of Turku introduced our new bachelors level course “Sustainable.now”, which covers basics of sustainability .

We had the 45 min break and it was time for the last workshop of the day. Santtu Mikkonen from University of Eastern Finland gave an interesting insight to our course about statistical tools titled “Statistical tools for climate and atmospheric science”. Laura wrapped up the formal part of the day with a little poll and reminded everyone of our evening activities, which were soon to begin. But first we headed to a well deserved 2-hour-break.

As the clock hit 18:00 we started our evening activities, which were:

The Kitchen: Cooking vegan food together

The Dining Hall: Informal discussions on the workshop topics

The Pub: Tasting some beer and making the world a better place

I was in charge of planning the recipe for the kitchen. I was also actually cooking the asparagus-lemon-risotto (delicious by the way, I’ll add the recipe to the end of this blog post), so kind of I got to live my childhood dream of being a TV chef. ? 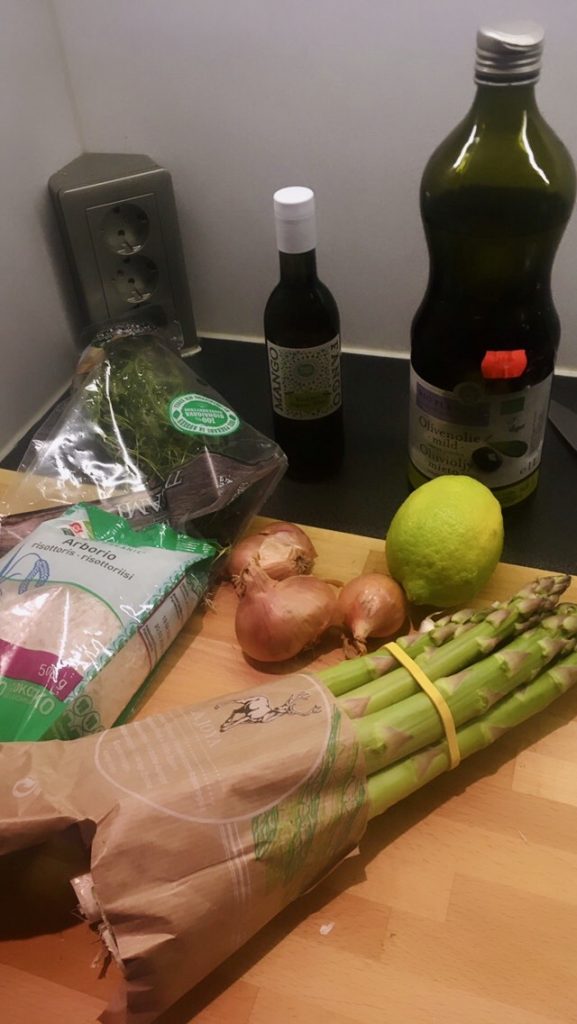 Eventually only one person cooked the food with me, but it was still super nice. The people from the Pub moved to our Kitchen Zoom room after about a half an hour (as everyone knows the best place to hang around in a house party is always the kitchen ?). We learned interesting details about bout alcoholic and non-alcoholic beers and I got to eat my self-made risotto, which caused some understandable envy among the people, who first watched me cook for 2 hours and at the end I was the only one enjoying the meal. Although we didn’t have too many participants in the evening activities, we all enjoyed the time we spent with each other. At around 21:00 we closed our Zooms, 12 hours after the superhero introductions. It was time to rest. 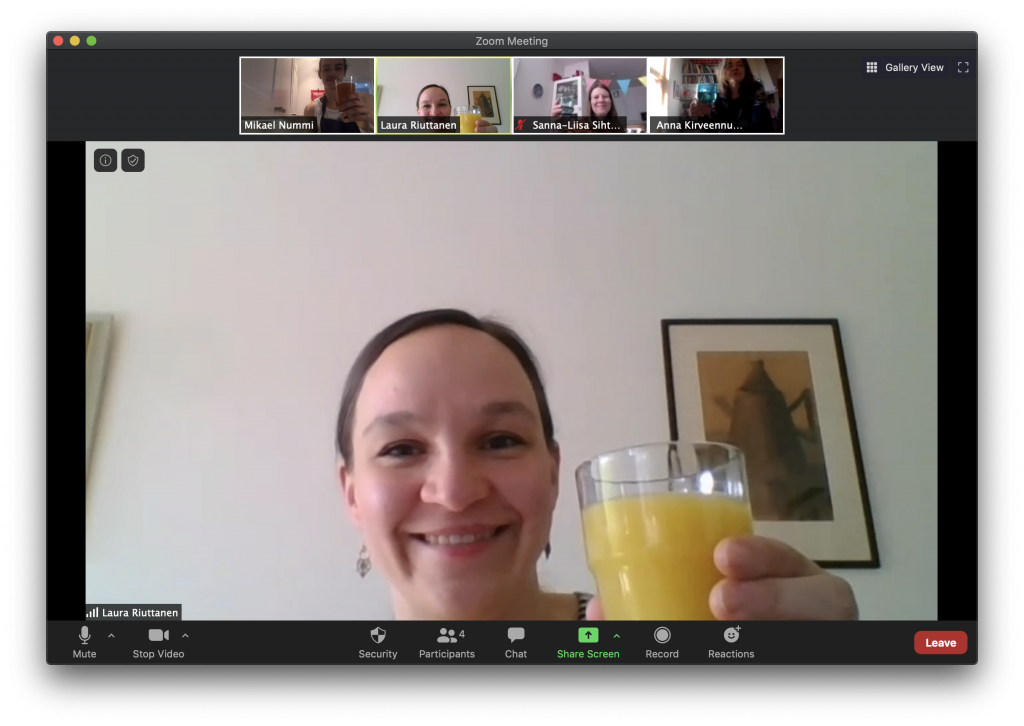 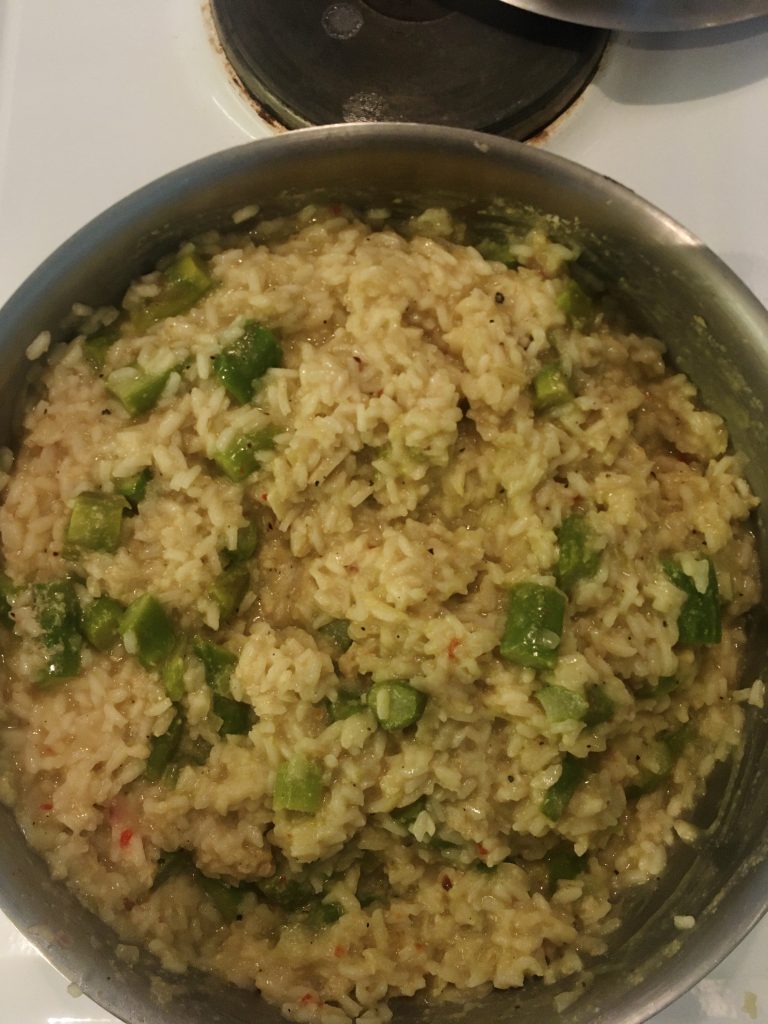 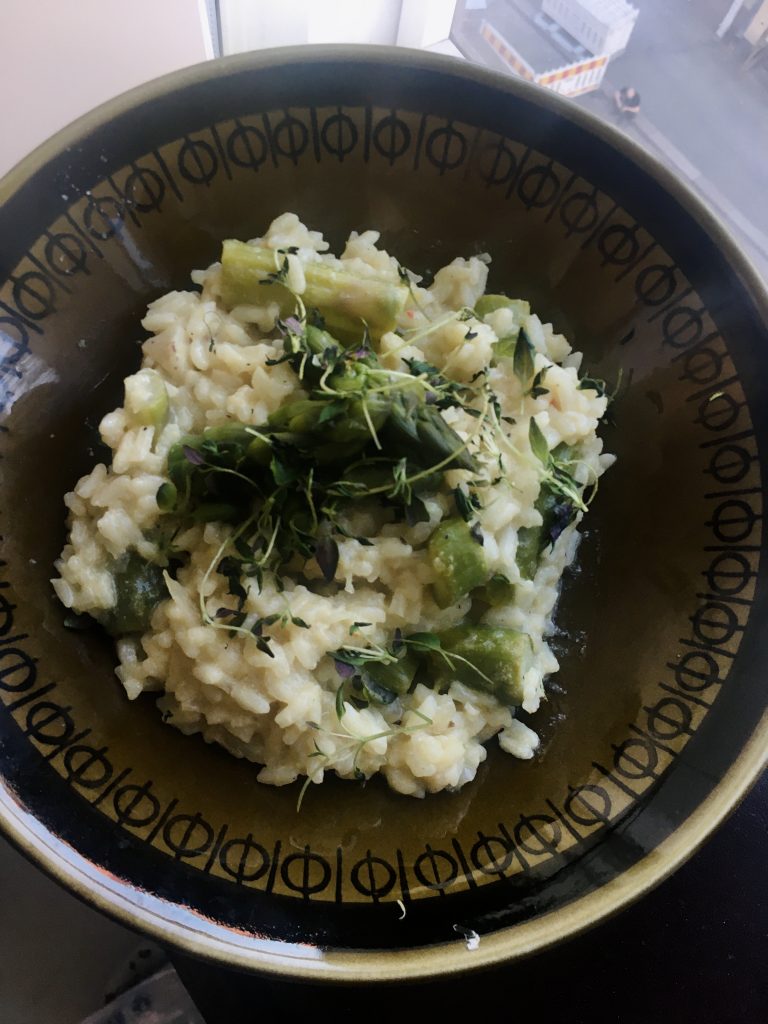 The next morning started with a fascinating workshop about the  pilot of the upper secondary school version of Climate.now. In the beginning I quickly introduced our Climate Challenge campaign. We also showed a never-before-seen challenge video, where the upper secondary school students form Tampere, who had just completed the pilot, challenged every Finnish school to:

After the challenges we offered the students a chance to ask anything they wanted form climate scientist. We had 4 specialists answering all of the great questions. Before the end of the workshop we heard feedback from the teachers and coordinators of the pilot courses, which were arranged in different upper secondary schools around Finland during this spring. 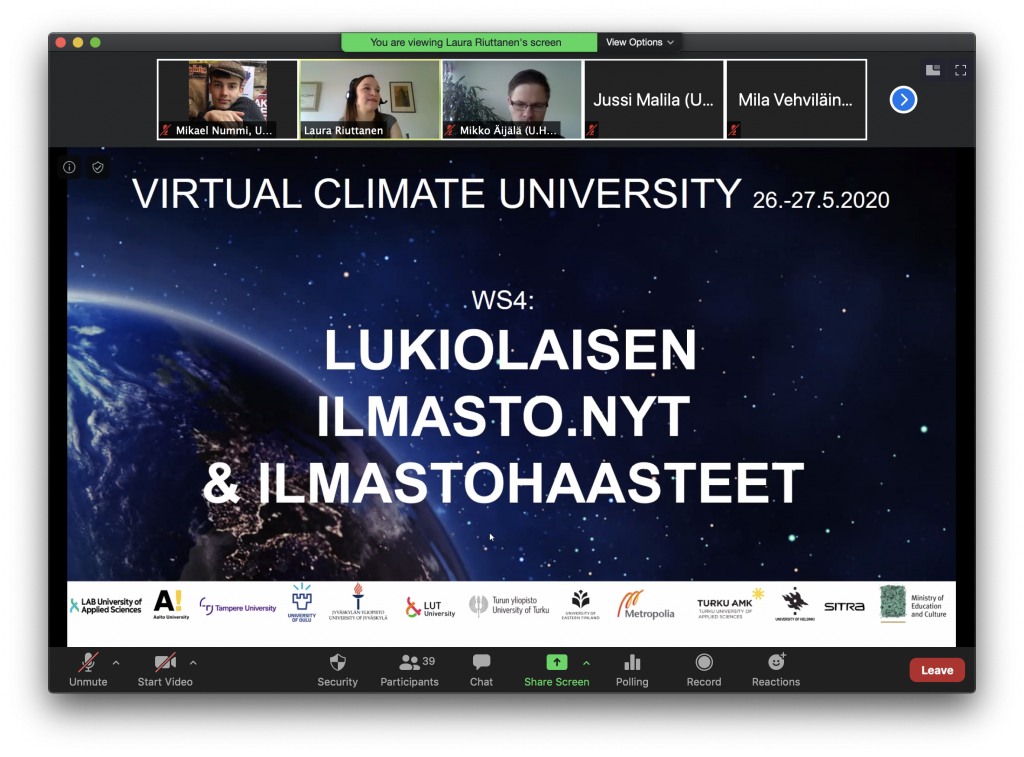 After another refreshing 1-hour-break it was time for workshop number 5. Mira Hulkkonen from the University of Oulu introduced one of our new courses “ClimateComms.now”, which she has created. The course goes into the history and state of climate communications and also gives tools for constructive alternatives. Participants interacted during the workshop via Flinga and Mira told us that she got a lot of useful new opinions about the course. It was also Mira’s birthday so we all signed a virtual birthday card to her. In my opinion this was the best workshop of the entire webinar. Thank you Mira for that! 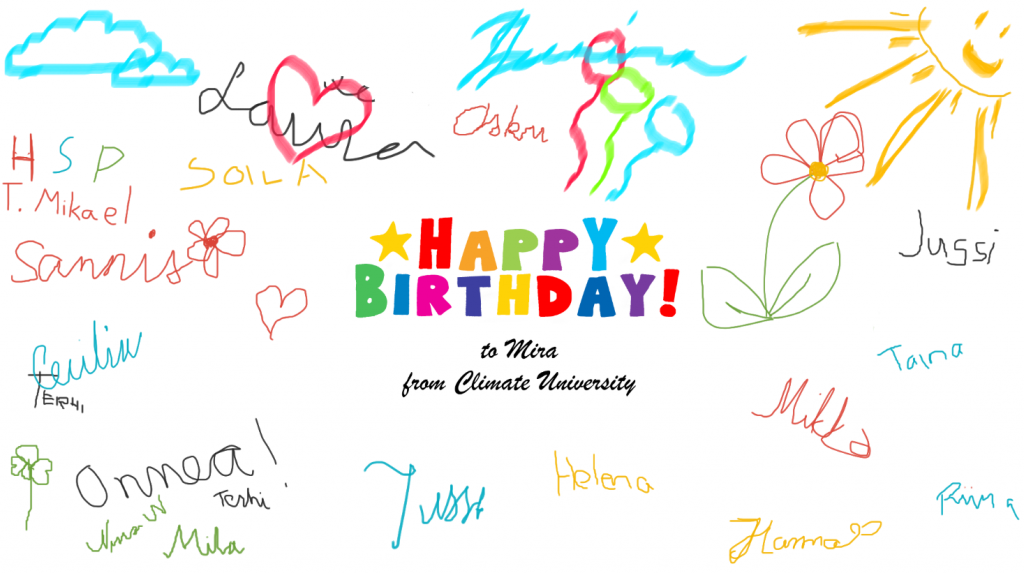 The last workshop started in the afternoon after a break. Veera Kallunki gave us a glimpse of the best practices of Moodle and finished the series of six interesting and eye-opening workshops.

Around 16:00 on Wednesday it was time for the final words. We had again a Zoom poll. At this point we, the hosts, were all pretty worn out, but still really happy about the webinar. We thanked everyone who participated and left the Zoom meeting. In total there was over 150 participants from 7 different countries!

I think it’s now officially safe to say that arranging a big webinar won’t be an issue for any of us hosts anymore. It was a challenging task and at certain points nobody was sure what’s going to happen. Thank you everyone who participated either as a listener, as a speaker or as just a regular super hero! We all have learned so much about new ways of working during these corona restrictions, which has been somewhat fascinating. However let’s hope that we can all meet in person at Kuopio and Tampere next autumn. Once again thank you!

One of your hosts,

Ps. Here’s the recipe for the risotto. Enjoy!

My name is Iina and I will soon graduate as a Bachelor of Logistics Business. I did my thesis to the Climate University project in cooperation with Päivi.  Together we worked for four months among an important subject that has also been our interest for a long time. The sustainable development and the responsible entrepreneurship are themes which define the lines of the economic operation to an increasing extent. The companies and organisations must take into consideration the demands of the responsibility in everyday functions and also at the strategy level.

The educational institutions must respond to the know-how needs of the labour to produce skilled enough labour to solve the responsibility challenges in companies and organisations. “By doing” according to an old phrase, one learns and therefore it would be good to be able to try the skills needed in working life already during the studies. Working life-oriented education and project courses are the form of the learning which has become common during the last decade in the second degree education. It is an excellent way to increase cooperation between the universities and the companies; in a realistic context the students are able to practise the necessary skills needed in the working life in the future.

The thesis was implemented as a part of the development of the Solutions.now course which is a part of the Climate University project. The purpose of the thesis was to make a report about the significance of the cooperation between the universities and companies and other organizations. The subject of the study was the direct advantages produced by the course to the principals taken part on the course in the present and demands for the future workers’ know-how. We carried out an interview study and got to interview seven of eight principals.

Sustainability is experienced as extremely important and wide subject in the organizations. To carry out the principles of sustainability in all three sectors the organizations needs the expert skills, global approach and inventiveness. New ideas and thinking outside of the box are expected from the students. When the principals were asked what kind of benefits they had gotten, the answers obtained was for example new useful ideas for solving problems, material suitable for example orientation or training for employees and a boost into lonely working. The time that the students were able to use for the research or such as the principal describes, “rummaging” was valuable. In the middle of the hurry such time would not have been found on the principal’s own staff. Furthermore, it was experienced that the course was also a good learning experience to the principals for the future.

We collected ideas and thoughts which hopefully are useful in the future when a course is arranged again. Loosening the schedule and strictly informing about it and other information in advance is what the principals desired. It is easier to the principals to frame the challenges on a right level and to be more exact when they know for example the students’ skills level and other available resources. In the beginning of the course it is important to make clear the expectations and objectives not only in the project group but also between the group and the principal.