In the beginning of November, it was time to get together with the Climate University community for an annual meeting. In the meeting the network news were discussed, and future plans workshopped. The meeting was especially aimed at Climate University coordinators and course teachers, but everyone interested to get to know more and to be involved was warmly welcomed. The event was organized prior to the Unifi and Arene sustainability and responsibility seminar in Tampere.

Figure 1. Participants posed for a group photo in the end of the meeting.

The aim of the Climate University network is to foster climate and sustainability teaching and learning in higher education as well as in society. Climate University provides free, high-quality online courses for universities and everyone who wants to make the sustainability transition in the society real. Currently, there are 27 Finnish higher education institutions as partners in the network. Climate University has developed materials to altogether ten courses, some of them in Finnish and English languages. In addition to these, the first course is now available also in Swedish (Klimat.nu).

In the meeting we celebrated the two new members of the network, Högskolan på Åland and Åbo Akademi. Iryna Herzon from the University of Helsinki, representing Biodiversity education network and the new Biodiversity.now course, discussed the importance of the biodiversity to life and introduced the new course. Natalia Korhonen from Finnish Meteorological Institute presented a new course topic: Living with changing climate and Anna Lintunen from the University of Helsinki introduced another new course theme Forests and climate change, both courses in preparation by several collaborators. 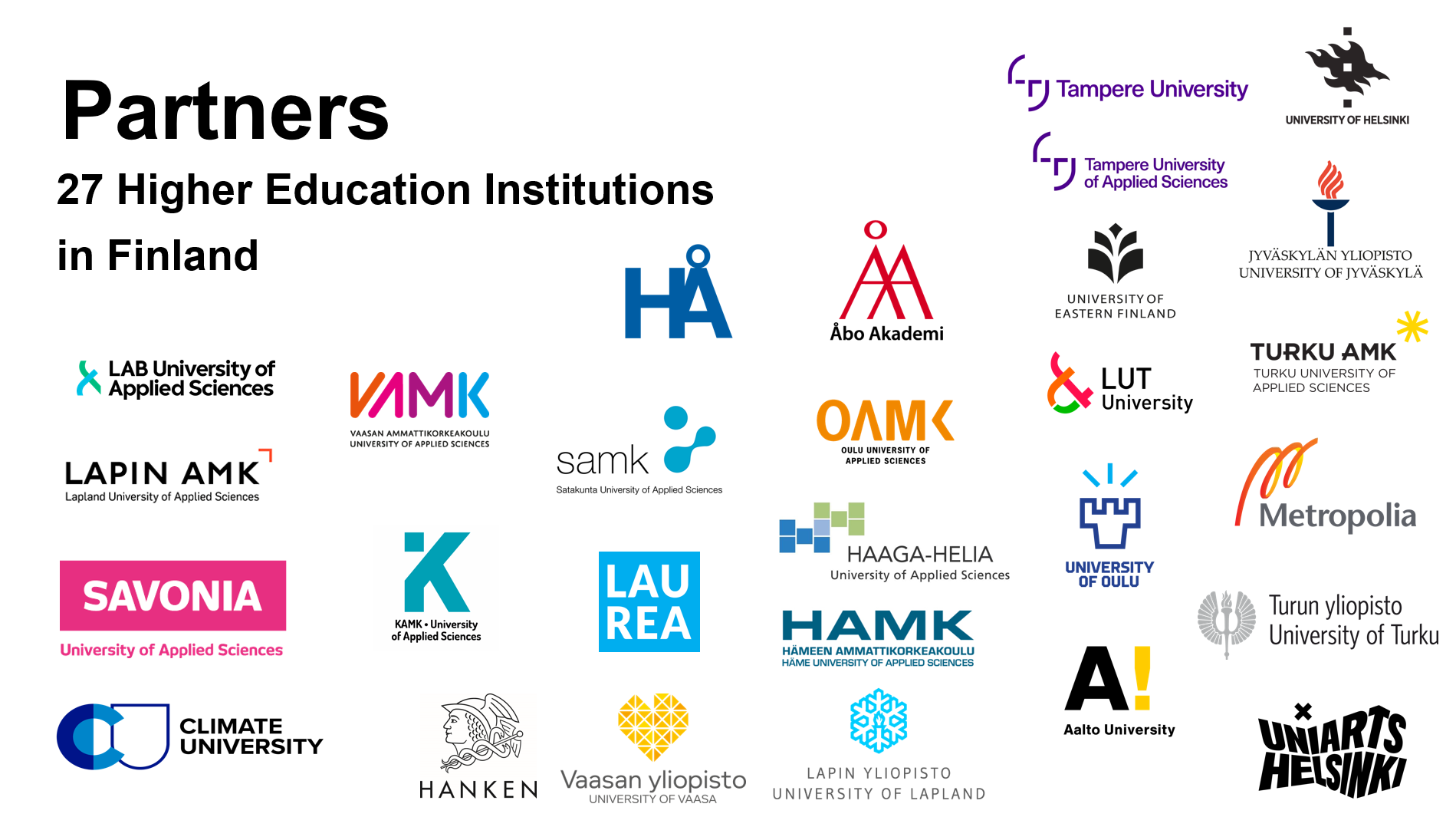 Laura Riuttanen from the University of Helsinki coordinates the entire network.  Laura presented the new initiatives and collaboration possibilities.

The workshops focused on developing current courses and sharing experiences from the past implementations of Climate University courses. In addition, initiatives made on new Climate University courses were discussed. New ideas, inspiring discussions and future plans were designed. The discussions will continue and as an example, network wide framework about vision, goals and action plan will be sent to the network coordinators by the end of the year.

In the evening, an open Sanomisen paikka -panel discussion was held at Tampere-talo in Finnish. Panelists discussed biodiversity, which is being depleted at an alarming rate due to the unsustainable use of natural resources, climate change, habitat fragmentation, and other human activities. What does this mean for the future? What can each of us do? This event was named as ‘Katoava Luontomme’. In the end, Idän Proffa, which is the alter ego of post-doctoral researcher Samuli Junttila from University of Eastern Finland, performed a song, which pulled together the entire discussion. Junttila strives to convey researched information and increase awareness of the deteriorating state of the environment. Understanding the effects of climate change and biodiversity loss requires, in addition to knowledge, empathy and feelings, which can be conveyed through music. Idän Proffa’s story started with the need to communicate his doctoral research and a music video, which was later also awarded with Science Magazine’s Dance your PhD award, however the project has become an important personal tool for him to deal with the emotions caused by climate change. 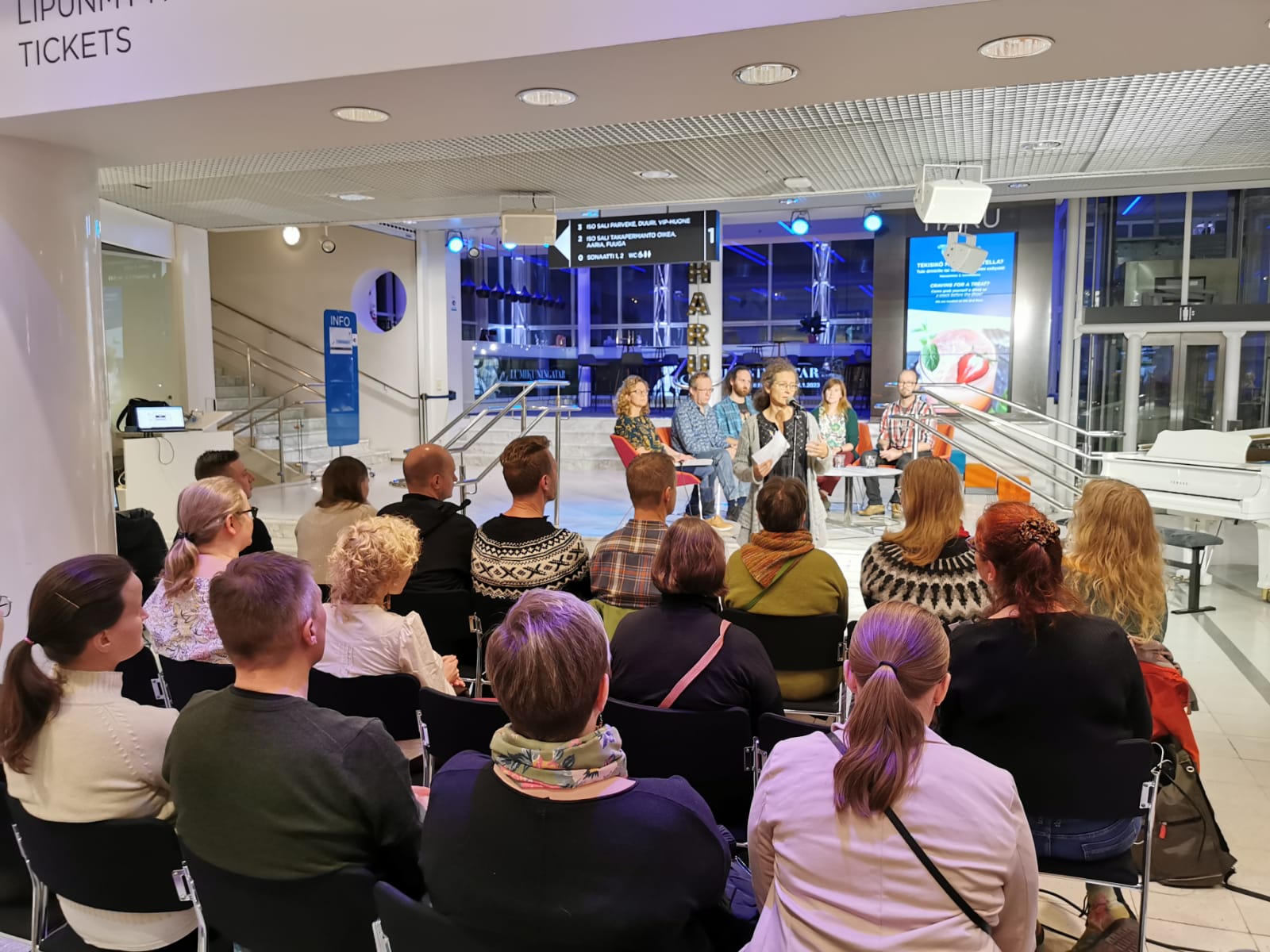 Feelings and atmosphere during the meeting

Although online education and tools provide many resource efficient and climate friendly opportunities for collaboration, it was very much appreciated to meed in person and have the opportunity to share views and discuss together. Thank you to Atmosphere and Climate Competence Center for the servings and very nice dinner at Telakka.

Next Climate University network meeting will be held in November 2023 attached to Unifi & Arene sustainability seminar in Helsinki. Before that, we hope to meet at Sustainability science days in May, and at coming courses!