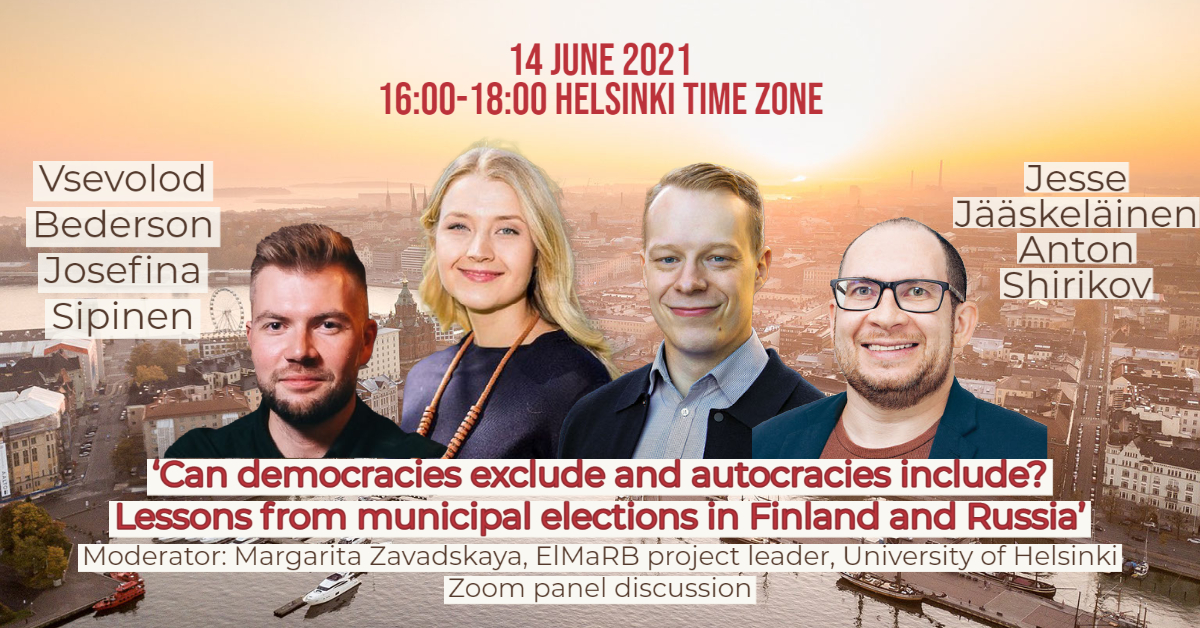 On the 14th of June our project organises the last event before the summer break – ElMaRB panel discussion ‘Can democracies exclude and autocracies include? Lessons from municipal elections in Finland and Russia’, The event will take place in Zoom, from 16:00 to 18:00 Finnish time.

The postponement of municipal elections in Finland in 2021 due to a worsening pandemic caused criticism from some of the opposition parties, who claimed that Finnish democracy was threatened. In Russia, in turn, the next municipal elections will be held in a number of regions on the all-Russia voting day on the 19th of September amidst worsening repressions against the opposition. What lessons can we learn from Finland, an established democracy which enjoys one of the best in the world media freedom, and Russia, a peculiar authoritarian state where some local elections sometimes are pretty competitive. How do municipal candidates deal with the challenges in both countries? What topics are important in 2021 except for the pandemic and its consequences? What is the state of elections in Finland and Russia and 2021?

We invited four speakers from Finland and Russia to discuss these and other questions:

Vsevolod Bederson is a coordinator of “+1” electoral coalition at the Perm City Duma election 2021. He has a PhD in Political Science and is a Research Fellow at the Center for Comparative History and Politics, Perm State University.  He organises popular science projects in Perm and hosts a podcast on political science topics.

Josefina Sipinen has just defended her doctoral dissertation about the recruitment of immigrant origin candidates in Finnish local elections. She continues her studies on ethnic and migrant minorities’ (EMM’s) political engagement in Tampere University as a postdoctoral researcher. Currently, she is studying whether EMM candidates in the 2021 Finnish municipal elections faced more harassment than native-origin candidates.

Jesse Jääskeläinen is an SDP candidate at the Helsinki municipal election 2021.  He works as a senior specialist at the Eurooppalainen Suomi. In 2017-2020, he served as a municipal councilor in Muurame, Central Finland. He is a Master’s Student of Political Science at the University of Helsinki.

Anton Shirikov is a PhD Candidate at the University of Wisconsin-Madison. He studies propaganda, misinformation, and perceptions of media in Russia, as well as post-communist politics more broadly. Previously, he was a journalist and an editor at various Russian independent media.

The event will be moderated by ElMaRB project leader Margarita Zavadskaya. To register for the event, please fill in this E-lomake.

Last week Margarita Zavadskaya participated in the discussion “Liberal values in Putin’s Russia: demand for novelty?”, organised by Riddle and Liberal Mission Foundation. Together with Olga Irisova, Stepan Goncharov, Timur Atnashev and with Irina Chechel’ as a moderator, the experts discussed whether there is a demand for liberal values (and which?) in modern Russia and whether different generations have different attitudes towards them. Below you can watch the full recording of the discussion in Russian:

On the 5th of May, we had yet another ElMaRB seminar, this time with Melanie Mierzejewski-Voznyak, Visiting researcher at the Aleksanteri Institute, who gave a talk ‘Gender quota effectiveness in Ukrainian municipal elections: institutions and actors’. Valeria Umanets, Ph.D. Candidate in Political Science at the University of Wisconsin–Madison, served as a discussant.

Over the past few decades, legislative gender gaps gradually decreased in political systems around the world with the introduction of gender quotas that have fundamentally changed political competition. While today gender quotas are common in Europe, only one-third of former Soviet states adopted such measures (Armenia, Kyrgyzstan, Uzbekistan, and most recently Ukraine and Georgia).  Melanie Mierzejewski-Voznyak’s research analyses the 2020 Ukrainian local elections and the impact of the Electoral Code adopted in 2019, particularly as concerns the new gender quota requirements. According to Melanie Mierzejewski-Voznyak, the 2020 local elections present an interesting puzzle; while these elections included an enforceable gender quota that led to an increase in women elected in bigger communities, the overall impact of the quota was limited with fewer women being elected to local councils where they have historically performed very well.

Mierzejewski-Voznyak analysed the impact and effectiveness of gender quotas in the Ukrainian 2020 local elections by focusing on institutional factors – electoral law and policy design – as well as party preferences concerning gender equality. By adopting a rational choice approach, she accounted for both institutional constraints and individual action. Melanie came to the conclusion, that the impact of the gender quota in Ukraine was limited to achieving a more balanced representation of women in the election process, though not in overall elected officials. The positive effects of Ukraine’s gender quota were specifically a result of 1) high costs for non-compliance and 2) the inclusion of a placement mandate that forced parties to go beyond meeting quota size and place women in winnable positions. In a party system comprised of weakly ideologically motivated parties, such as Ukraine, institutions matter for the effectiveness of candidate quotas. Her findings thus suggest that in newer democracies in the post-Soviet context, pragmatism rather than ideology drives parties’ decisions to comply with gender quota requirements.

This research will be published as an article in the near future and we are looking forward to reading it.

Our third ElMaRB seminar this spring took place on the 14th of April. Our project intern Valeria Caras gave a talk “Trust in governments during the COVID-19 pandemic: attributing responsibility and revealing the determinants”, which is based on her Master’s thesis. Maria Bäck, University Lecturer at the University of Helsinki, Political Science, acted as the discussant. Below you can find the abstract of the talk and the recording with subtitles:

I aim to explore factors that impact the formation of trust in governments during the Corona pandemic from a comparative cross-EU perspective. I apply multilevel regression analysis on survey data and find a significant impact of clarity of governmental responsibility on trust. The majority of citizens appreciate less polarized and more cohesive cabinets in crisis times. Respondents’ welfare emerges to be another critical factor since people who lost their jobs during the COVID-19 and experience financial difficulties tend to distrust the incumbents. However, the difference between such groups and people who kept their market positions is more substantial in higher governmental responsibility systems. Clarity enhances economic polarization: respondents who did not suffer or suffer marginally from the pandemic’s consequences trust more in united governments while people whose finances worsened since the pandemic’ onset distrust more in such systems. The finding indicates that the unemployed blame less polarized governments because they can establish a better link between personal welfare and governmental action when cabinets are united. The study also compares trust levels across EU member states, revealing Nordic countries as leaders in trust and Central and Eastern Europe as the forerunners in distrust. The pandemic’s economic consequences have intensified trust deterioration, especially in Poland and Hungary, where governments are mostly distrusted and punished for the economy. The current crisis might strengthen the ‘hyper accountability phenomena – a severe punishment by the population for an economic downturn present in the CEE region since the transition.

Finnish municipal elections were scheduled for the 18th of April, but due to the exacerbating pandemic, the government decided to postpone them until the 13th of June. This decision received harsh criticism from opposition parties, especially from the right-wing populist party The True Finns (Perussuomalaiset), who claimed that it endangered Finnish democracy (Suomen Uutiset).

In this post, Valeria Caras, ElMaRB project intern and Master student of the European and Nordic Studies programme at the University of Helsinki, analyzes the effect that the pandemic and political regime have on the electoral schedule and electoral outcomes. Valeria endeavors to investigate who benefits from the emergency or, vice versa, loses support? Previously we overviewed the electioneering in the times of the pandemic from February to July 2020. In all eight elections in that period, ruling parties and groups ensured survival in power and even gained additional support. This phenomenon is well known as ‘rallying around the flag’ when citizens tend to temporarily unite in the face of a common threat. Analyzing national elections from July 2020 till April 2021, we still observe the evidence of the ‘rallying effect’. In most parliamentary and general elections, ruling parties won the elections (21 cases out of 27). From these 21 victories in seven cases, incumbents lost a small proportion of votes. In other cases, elections were won by the opposition and by the newly created parties. The election postponement trend was mainly present in March-June 2020 when the share of the re-scheduled campaigns exceeded hold elections (IDEA). However, since the autumn electoral period, especially from October 2020, elections are less rescheduled, and campaigns run on time despite various stringency levels across countries. 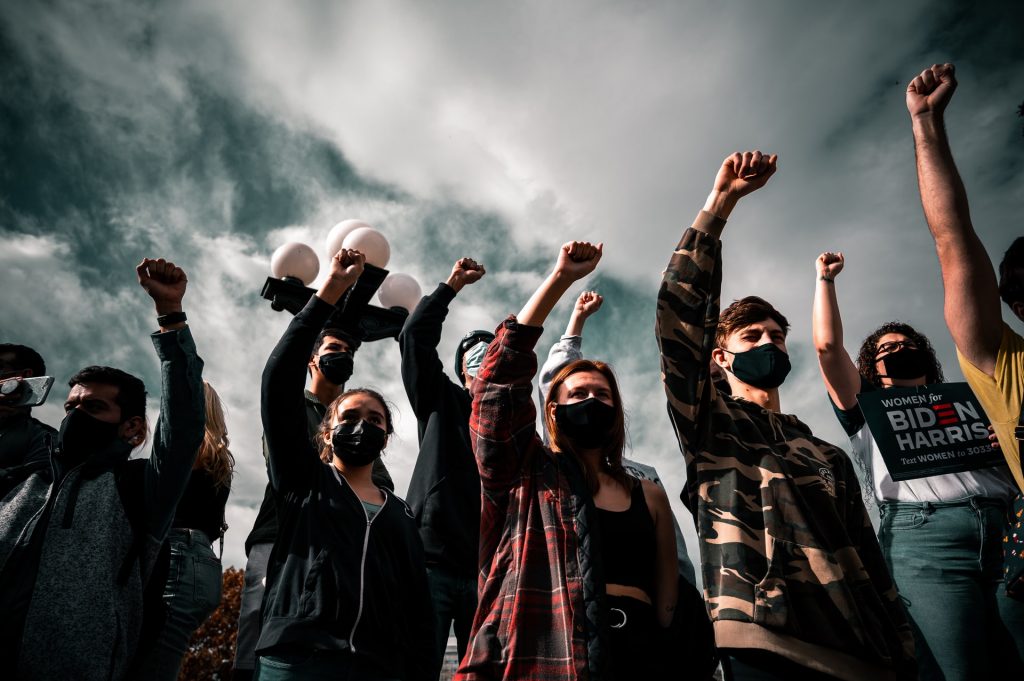