Still watching Vietnam war documentary series and i have only one whole episode left. This post is not about it yet, sorry! In mean time i decided to write something about some other historical events because it’s weekend and i have no other things to do :).

In today’s (Saturday 9.2.2019) Helsingin Sanomat was a article about north Irish people and their thoughts about Brexit. North irish people are concerned about effects of Brexit and how it affects negatively for travelling to Ireland and back. Big question was that how border control will work in border which is about 500 km long and has about 200 roads crossing it.

One of my favorite things is to check the calendar of Wikipedia and see what events have happened on this date. On this day 1996 IRA (Irish Republican Army) declared end of ceasefire and exploded truck bomb in London Docklands. So much North Ireland on this day so i decided to read again some articles more about it aaaand North Ireland and The Troubles will be some kind of theme of this post. All information in this post will be from Wikipedia article about The Troubles. 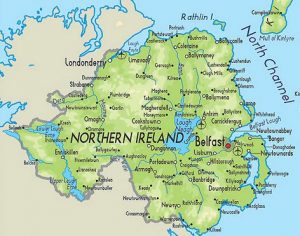 Conflict started in 1960’s after non-violent civil rights campaign. It’s goals were for example end job discrimination, end housing allocation, equal right to vote, reform of the police forces and repeal the Special Powers Act of the police forces. Catholics / nationalists were often rejected in many instances so they wanted to make a change. Civil rights campaign resulted many protest and marches in North Ireland which were often disbanded by police with violence and arrests. Terence O’Neill, the prime minister of Northern Ireland, promised some concessions but nationalists saw them as too little and unionists saw them as too much. End of 1960’s saw also the founding of unionist paramilitary force called Ulster Volunteer Force (UVF). Nationalists had their own paramilitaries such as Irish Republican Army (IRA) which was already founded in 1920’s to battle against British forces in Northern Ireland. Civil rights campaign lead to widespread riots in 1969 and several nationalists were shot dead by police forces. In August 1969 British forces were deployed to Northern Ireland to restore order and first they were welcomed by nationalist because they didn’t trust the Northern Ireland police, Royal Ulster Constabulary (RUC). After incident called Falls curfew, where four civilians were killed and dozens wounded when British army made house-to-house search for weapons in nationalist residential area, relations deteriorated between army and nationalist people. British actions in Falls resulted radicalization of many Catholics.

1970’s saw the escalation of violence in Northern Ireland. One of the reasons was the split of IRA to Official IRA and Provisional IRA (PIRA). Provisional IRA focused to armed struggle against British Army and RUC and took the role as defenders of catholic community. One event which affected to escalation of violence and radicalization of nationalists was the Bloody Sunday on 30th of January 1972. On Bloody Sunday British army shot dead 14 unarmed catholic civilians in city of Derry. Event resulted increasing hostility of nationalists towards the British army and IRA gained more and more support. 1972 was the most bloody year of the whole conflict and PIRA killed about 100 members of security forces and wounded hundreds more in numerous gun fights and bombings. Number of British soldiers in Northern Ireland increased rapidly and ratio was 20 soldiers per 1000 inhabitants which is highest ratio in any counterinsurgency operation. 1970’s continued violent and IRA conducted hundreds of bombings and firefights with British army. UVF paramilitaries also shot dead nationalists in many instances. Conflict also spread from Northern Ireland and for example in Birmingham a pub was bombed by IRA, killing 21 people. 1979 PIRA assassinated British statesman and admiral Lord Mountbatten. On same day IRA ambushed British army convoy in Warrenpoint killing 18 British soldiers. These two attacks were huge success to IRA.

1980’s started with famous hunger strike in 1981. Most notable of those 10 people who starved to death was Bobby Sands who was elected member of parliament. Hunger strike was significant for nationalists as it drew lot of international interest. PIRA started their “Long War” campaign in early 80’s and it was boosted with new weapons smuggled from Libya. “Long War” included war of attrition with British armed forces, large bombing campaign and make Northern Irish counties difficult environment for British. Most notable attack, that IRA conducted was the bombing of Brighton Hotel which was attempt to assassinate Britain’s Prime Minister Margaret Thatcher. Smaller scale attacks were more common in Northern Ireland. PIRA conducted many bombings and shootouts were several civilians and soldiers were killed. PIRA for example attacked and destroyed many small RUC stations all over the Northern Ireland. There was also allegations of shoot-to-kill policy practiced by British authorities. It was alleged that British special troops killed wounded PIRA paramilitaries in Loughgall ambush which resulted death of eight PIRA attackers.

Armed campaign continued in 1990’s despite the political process of Sinn  Fein (political wing of IRA) which aimed to end the conflict peacefully. First ceasefires were declared in 1994 and again 1996. Before the second ceasefire PIRA carried out two high profile bombings in London Docklands (Picture 4) and Manchester. Both bombings caused huge damage to economy and property. Violence continued also in Northern Ireland and especially in South Armagh county which had long tradition of being IRA stronghold. There IRA attacked British convoys on roads, helicopters and used sniper teams to kill British service men. One of the most iconic images of the whole conflict is from South Armagh (picture 5).

After second ceasefire, political agreement was established and it led to Good Friday Agreement in 1998. It restored self-government of Northern Ireland, RUC reformation and led Northern Ireland to peace.

Last British army troops withdrew in 2007 but majority of them was withdrawn soon after 1998. About 3500 people died during the conflict and 1972 was the bloodiest year of the conflict when 480 people died. About 60% was killed by Republican paramilitaries, 30% by Loyalists and 10 by British security forces.

This was quick summary about the conflict and next post will probably be review of Vietnam War documentary series.