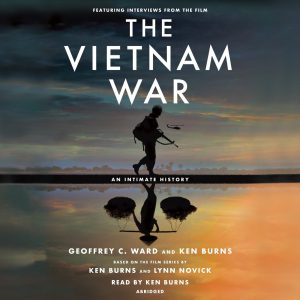 This post is about Vietnam War documentary series which i finally managed to watch to the end. Documentary series is called “The Vietnam War” by Ken Burns and Lynn Novick. I made some research from Wikipedia and learned that production of series took over 10 years and cost about 30 million dollars (woah!). Document consisted of 10 episodes which were about 1,5-2 hours long making total length to be about 18 hours.

Document starts from 1940’s and ends with unification of Vietnam in 1975. First impression about series is that it’s clearly done with care and it’s very nicely constructed documentary with multiple points of view.  Documentary is surprisingly objective (despite normal USA patriotism in last episode) and dozens of people were interviewed for it. People that were interviewed were from both sides: Americans and Vietnamese, soldiers, peace demonstrators and their family members for example. Documentary tells the overview about events in Vietnam and USA but also tells several stories of regular soldiers and other ordinary people. According to Wikipedia, documentary makers avoided historians or other experts and focused more people who experienced the war and that’s what surprised me positively. Also thousands of photographs and video footage was used in documentary which I think is always exciting. I think “The Vietnam War” documentary is one of the best I’ve ever seen and I recommend it for everyone who has interest in history and likes good documentaries.