In a post about DJ Kridlokk’s album release gig I mentioned that awesome albums have been released this year although it’s end of February. One of the albums I’ve been really stoked and excited about was released few weeks ago 15.2.2019. Singer on this particular album has gained worldwide popularity with his former band HIM. Band behind the instruments has  been backing band for several famous Finnish singers such as Topi Sorsakoski, Jorma Kääriäinen and Rauli “Badding” Somerjoki and is known for revival of traditional Finnish beat and instrumental rock in 80’s. Only possible collaboration behind this album can only be Ville Valo & Agents.

Ville Valo & Agents worked briefly in late 90’s in TV show called Laulava Sydän where Valo performed few songs in episode which was dedicated for Rauli “Badding” Somerjoki. Collaboration got continuation after Agents’ mastermind and lead guitarist Esa Pulliainen found tapes from early 80’s with demo recordings of Badding’s songs that never made to the actual records. Pulliainen watched the tapes that were on his desk for many years and then contacted Valo because he knew that Valo has strong grasp on Badding’s music. After HIM disbanded 2018 Pulliainen and Valo started to work with Badding’s unreleased songs.

First single from the album “Orpolapsi Kiurun” was released on 21st of September 2018. Badding’s voice was ripped from original record and can be heard in middle section of the song. Few months later in November, release date of the album was published with track list. Album has seven unreleased songs and five classics re-recorded.

I personally really waited for this album and it didn’t let me down when it was released. I was also pleased to hear that album has also two instrumental tracks (Kirstinkulma and Kettu). Style of the album is soft and not very surprising if you have listened latest Agents records (Blue and Sound on Sound) and it sounds just like I imagined. Multilayered, compressed and echoing guitars accompanied with smooth drum grooves, supporting bass and Valo’s vocals can’t really produce bad record. Album has no bad songs and I’d say that this is going to be one the best records released this year! I you haven’t yet listened this record, I recommend to do it because this album is one of the biggest cultural achievements for a while.

Song I pick above the others: I told you so 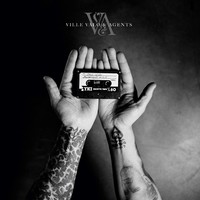