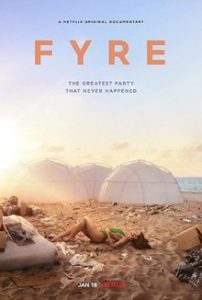 The Vietnam War documentary was that long so meanwhile I decided to watch something else and shorter. Document that I spontaneously chose from Netflix was document called “Fyre: The Greatest Party That Never Happened”. It was released in Netflix in January 2019 so it’s brand new! Document is about failed music festival in Bahamas called Fyre and it shows footage from preparation of festival and ideas that led to disaster.  Festival itself was good example about social media influencing and how people want to be part of something unique and are ready to pay thousands of dollars. Well, i don’t have much to say about the documentary. Of course i knew the outline about festival and things that happened there but of course document provided good overview about events leading to festival and what happened after it. This document was simple and easy documentary and provided entertaining 1,5 hours.