We are all exhausted. Even when we manage to get enough sleep, which is not possible for many, energy levels are at an all-time low (as described in this CBC radio feature and this article from The Insider). Of course, the many disruptions, large and small, brought into our lives by the COVID-19 pandemic have required that we rethink almost all aspects of our lives. This is exhausting.

The pandemic has not only brought with it a disruption of habits and an increase in the number of decisions we have to make, but also an overload of information and negative news. This has consumed a great amount of cognitive energy, in an effort to either deal with or ignore the flow. In addition to these cognitive challenges, we are deeply affected in our bodies. Our chests feel compressed even if we know, rationally, that we are safe. Our guts are twisted in knots, even if we just filled the pantry with essential (and non-essential) foods. Our bodies are fatigued, despite the plentiful sleep and reduction in physical activity caused by staying so much at home. But we are also exhausted by the social collapse we are going through.

Romi Crawford has argued that “I can’t breathe” are now America’s defining words[1] (see her blog entry “Connecting Breaths”). These are the words uttered by those directly suffering from one or the other virus affecting the USA: Sars-Cov2 and racism. These two diseases are both potentially deadly. I would argue that even when one is not directly infected by these diseases, one still suffers from them. 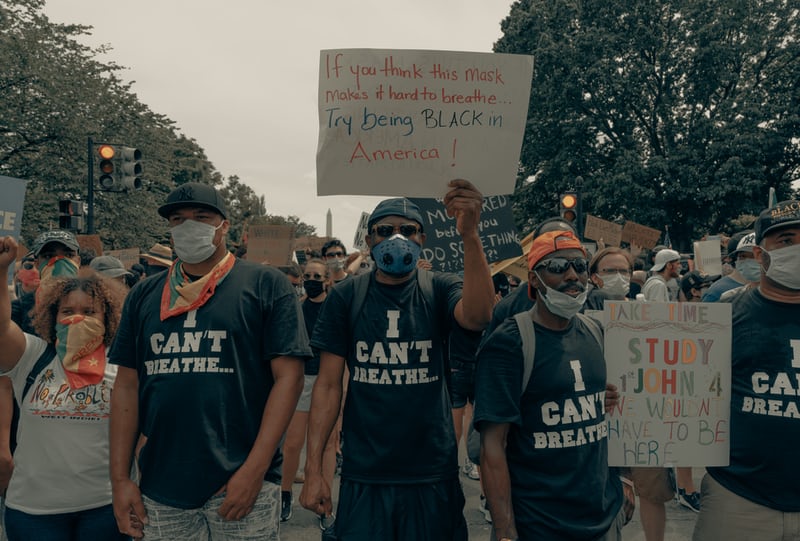 Photo by Clay Banks from Unsplash

In a book chapter to be published in 2021,[2] I explain that we are radically entangled beings and, as such, we are open to the world and what happens in it, whether we consciously choose to be open or not. This means that our bodies are permeated by things like the pollution we breathe in or the chemicals we ingest, but it also means that we suffer a high degree of mental pollution via the news, discourses, and ideologies we are constantly exposed to. This is a posthumanist material feminist point of view, that sees humans as constituted by manifold material and subjective entanglements. The beings we encounter, materially and/or subjectively, shape who and what we are, just as much as we shape who and what they are. In a world currently permeated by various toxicities, from the new coronavirus to resurgent fascist and racist modes of thinking, we are constantly exposed to these toxins—and sickened in body and spirit from them.

The pandemic has certainly taught us this lesson: we are interconnected in ways we often don’t suspect, yet one of the measures taken to combat the spread of the virus was to try to minimize this interconnection via lockdowns and physical distancing. However, can one really cut oneself off from the violence in the world, and the discourse and ideologies of those perpetrating it? Is it desirable to turn oneself into one of the three wise monkeys, or all of them at once? If one does not see, does not hear, and does not speak evil, then evil does not exist … does it?

One of my old uncles shared with me his impressions of his trip through Central America with his wife and brother and sister-in-law, back in the days when such travelling was still possible. They drove an RV across several countries, and then cut across Mexico and the USA to come back to Quebec. He commented: “It is so poor down there [he was referring specifically to Mexico], it is horrible. I don’t want to see this!”’ I still love him dearly, even if he was being a wise monkey. 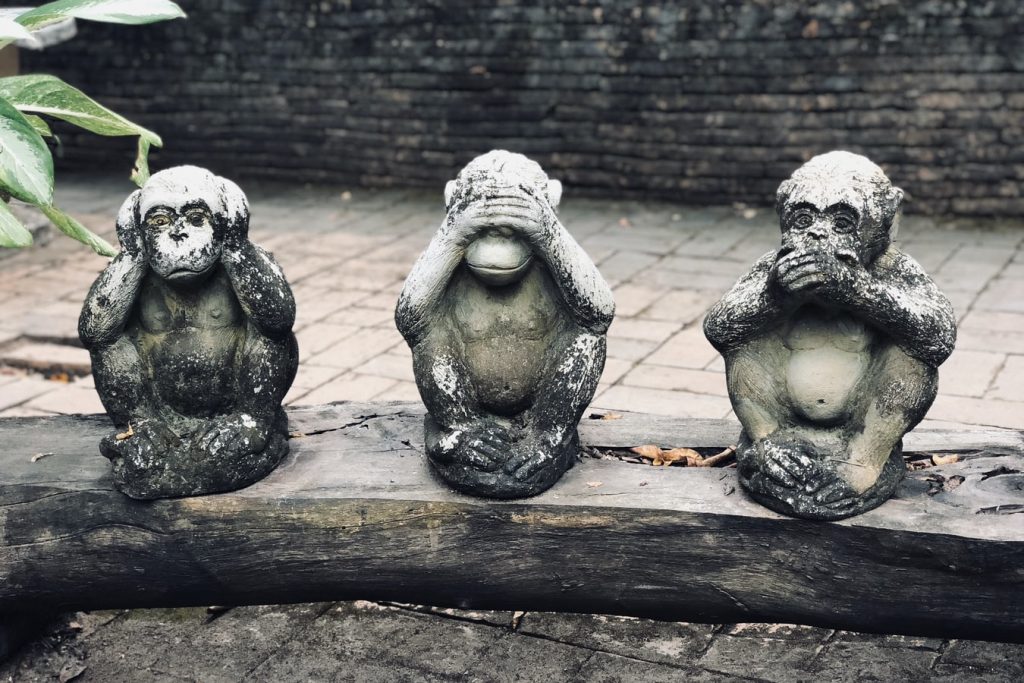 Image by Joao Tzanno from Unsplash

As users of media—traditional, digital, social—we are constantly exposed to the evil in the world, and cannot cut ourselves from it. It can be argued that we all suffer from at least a mild case of PTSD as a result, since we hear about, read, or even see the beating and killing of humans on a daily basis because of their race, their creed, or their objection to the dominant political and economic powers. I have been exposed to the violent assault and killing of many American black people via my Twitter and Facebook feeds. Activists I follow, such as Shaun King (@shaunKing) and Michael Moore (@MMFlint), populate my feed with such news. The violence needs to be exposed so that we may resist it. However, each and every exposure is a punch in the viewer’s gut, as it also exposes us to the racist worldviews and hatred of the perpetrators, as well as the senseless pain and death suffered by their victims. Such exposure is violent and destabilizing; but, I would claim, it is necessary.

The unfolding social unrest in the USA and the heightened crisis following the murder of George Floyd and the ensuing BLM protests are potent signs of the erosion of the social fabric in that country. But it is also a reassuring indication that resistance to oppression can be revived. The BLM movement is not new, but was suddenly and powerfully re-energized by this act of hatred as well as the many other killings of black people at about the same time, such as Breonna Taylor and Daniel Prude. The killings never seem to stop. But resistance does not seem to wane either. Indeed, cities like Portland have seen ongoing unrest as masses of people protest such killings and systemic racism. The state reacts through the violent oppression of their protests, thereby continuing to fuel the fire. 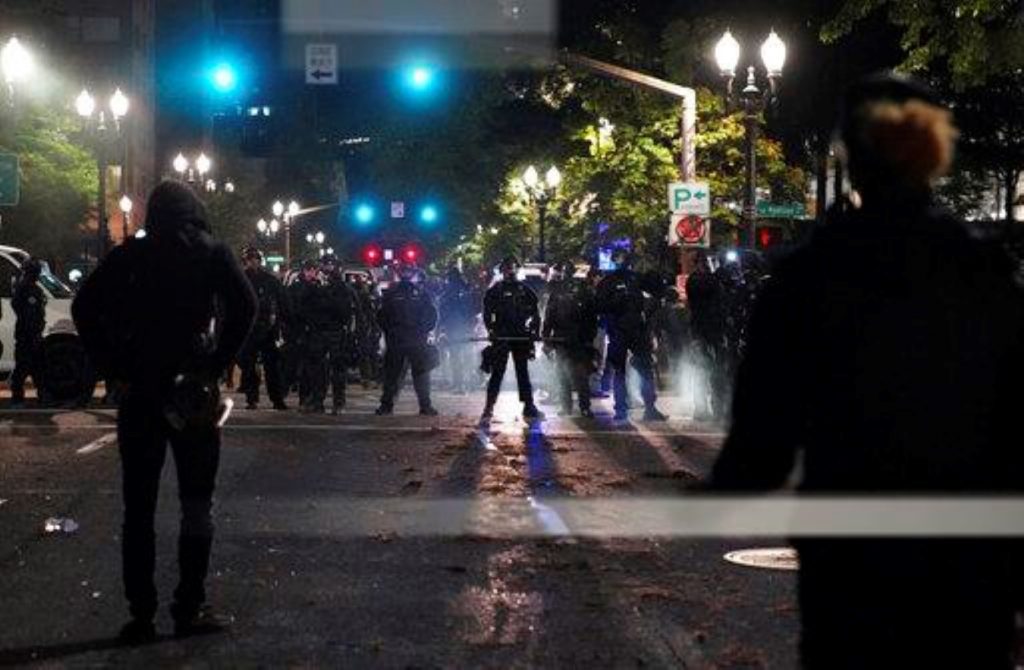 Portland Police line up blocking the street while protesters rally in front of them at the Mark O. Hatfield United States Courthouse on Saturday, Sept. 26, 2020, in Portland, Ore. (AP Photo/Allison Dinner)

The almost daily occurrence of such killings has been going on for years—for decades—and may have caused a sort of short-term desensitization to their brutality. There are moments when the amount of bad news is just overwhelming. We feel despaired and disempowered. It was heartbreaking to hear Michael Moore cry on his Rumble podcast episode 120 “Emergency podcast system – R.I.P. RBG. Wipe Your Tears and Fight!” on September 19, discussing the devastating news of Ruth Bader Ginsburg’s passing and what consequences this was going to have, but also the fact that there is so much intense evil and violence going on in the world. He sums up the feelings of activists and members of the population:

“Do we just sit by and say ‘What are we going to do? I can’t take it anymore. There is a pandemic going on. There is a thug in the White House. Black Americans are being shot by police. Every few days there is a new piece of footage of our police treating black people like animals. How many people have died since March? It just doesn’t seem…’ I know, I know. I know what you are feeling, I know. But my friends, we have to buck up and we have to just wipe those tears away and move on, immediately.” (transcription of segment starting at 11min 28sec)

Even such a staunch activist as Moore, who has fought so many battles over the years, can feel overwhelmed by all of this. Simply reading the summary he provides is overwhelming. And you may feel overwhelmed again reading this blog entry. I am by writing it. But, we have the capacity, and we have a duty, to expose ourselves to the many evils out there and convert our feeling of despair into anger, and to feed resistance with this anger so as to strengthen it. Perhaps it is the case that the higher the degree of despair, the greater the anger and resistance must be. This means that it is affectively extremely painful. But trying to avoid the pain and the anger will not be successful. We will continue to be exposed to the pain and suffering, and may be directly impacted by the violence and hatred. Indeed, if it is not resisted, it will only worsen. We cannot afford the wise monkey strategy, since it would only lead to our demise.

[1] By which she means the USA, a point Canadians like me are eager to raise. We get irked by this misuse of the name of a continent to refer to a country. This misuse serves to lump us together and erase our identity, at least symbolically. But we consider ourselves very distinct even as we are immediate neighbours.

Christine Daigle, a Core Fellow at HCAS in 2020-2021, is Professor of Philosophy and Director of the Posthumanism Research Institute at Brock University. Her current research project explores the concept of posthuman vulnerability and its ethical potential from a posthumanist material feminist point of view.