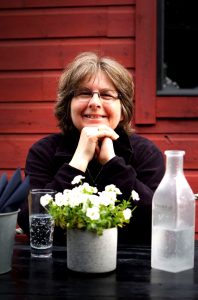 The Language Centre’s Unit of LANGUAGE SERVICES took me on board in August of 2001. My academic degrees were not in English, but in history. By the time I applied for this job, however, I had already discovered, to my surprise, that revision work is quite suitable for someone with my particular set of academic interests and skills. History covers a wide range of subjects, while writing is a valued skill that is carefully taught to would-be historians. This skill set has therefore served me well in revising texts on behalf of the University of Helsinki’s academic staff and its researchers, from PhD students to post-docs at the Helsinki Collegium for Advanced Studies.

I was nominated for the title of FACE OF THE YEAR, due to the doctoral thesis in social-science history that I successfully defended on 20 May 2017. In my thesis, Unmaking History-as-Fiction, I combined my fascination for both history and language by examining the narrative theory of the ‘linguistic turn’ in historiography (the study of history writing) during its heyday in the early 1970s to the turn of the new millennium. This work took me through dense theoretical texts from linguistics to cognitive science that utterly stretched my abilities to understand them. But it also exercised my writing skills in a way I could never have imagined beforehand.

In addition, I have achieved the level of education of the writers, whose texts I REVISE on a daily basis. I understand now from the inside, for instance, the context within which such texts (for publication) are produced. In the first place, I thoroughly understand the immense struggle it is to write coherently and convincingly on a difficult topic, let alone in another language not one’s mother tongue. My respect and compassion for what non-native writers are attempting to accomplish in English has made me a dedicated and passionate advocate for their writing process in all my revision efforts – now more than ever.

After my own experience of completing THE DOCTORATE, three things stand out. First, my level of comprehension of difficult texts is nowadays much deeper; I also have a better intuitive grasp of what’s required to ‘get the language right’ in riding the hard-and-fast border between revision and editing. Second, the speed of my work has increased, that is, without sacrificing the rhythm and texture of the author’s own voice. Third, my self-confidence has risen significantly which, in turn, has increased the speed of the work, because I understand it better, in a mutually supportive circle.

Finally, the pool of freelancers that Language Services draws from has several PhDs among them, who labour over their clients’ texts, just like I do. In other words, I’m just one of many professionals here at Language Services, who care about THE LANGUAGE of these texts. Indeed, our efforts are both satisfying and worthwhile, if these writers return to enlist our services in helping them get published. And they do – on both counts!