Hanne Appelqvist, “What Kind of Normativity is the Normativity of Grammar?”, forthcoming in Metaphilosophy January 2017 issue

The overall goal of this paper is to show that aesthetics plays a major role in a debate at the very center of philosophy. Drawing on the work of David Bell, the paper spells out how Kant and Wittgenstein use aesthetic judgment as a key in their respective solutions to the rule-following problem they share. The more specific goal is to offer a Kantian account of semantic normativity as understood by Wittgenstein. The paper argues that Wittgenstein’s reason for describing language a collection of language-games is to allow for a perspective that shows those games as internally purposive without any extra-linguistic purpose. This Kantian principle of the power of judgment, which is identified in Wittgenstein’s text, is sufficient for treating the rules of language as normative in spite of their contingent base in the historically varying practices. It also allows for that union of the general rule and its particular application in practice that the original paradox of rule-following is wanting.

Anna-Liisa Tolonen, ‘Interactions with Others in John Chrysostom as a Means to Manage a Diversity of Visions’, De Gruyter’s Open Theology. Vol. 2. Issue 1, pp. 494-510

This article is based on a paper presented at the AAR Annual Meeting 2015 in Atlanta, USA.

Abstract:
Two opposing opinions about “the Maccabees” feature in the homily On Eleazar and the Seven Boys. According to the homilist, “the Maccabees” can be recognized as martyrs; yet, many others fail to see it. The construction of this conflict relies heavily on another confrontation identifiable in the same text: a dialogue between the homilist and “the Jew”, who thinks differently and, in the opinion of the homilist, incorrectly. These tensions in the source may be taken to reflect “identity-political” issues of the time and evaluated accordingly. My analysis challenges this view by emphasizing how difficult it is to reconstruct historical encounters between persons/groups based on such a source. I suggest, instead, that the conflict and dialogue should be considered parallel examples of how, in the context of late antiquity, a Christian intellectual mind conceptualizes “difference” (of opinions or between identities) and how it deals with it. The analysis shows that the homilist’s argumentation is built on seemingly commonsensical or authoritative fair-to-all “facts”. Yet, interactions with others provide the homilist with ways to govern and re-produce those very facts. They are not social struggles but, rather, they represent the level of otherness contained in the discourse. 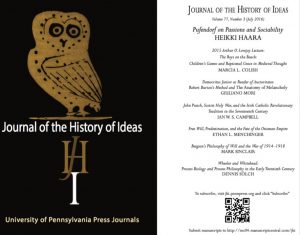 The article explores the role of passions in Samuel Pufendorf’s theory of sociability and his description of the structure of human societies. Given that one of the central themes in early modern moral and political thought was how passions must be controlled and redirected, it is striking how little attention Pufendorf’s notions on passions have received in modern scholarship. The article shows that Pufendorf conceived passions as a constant threat to peaceful social order, and yet as valuable, even indispensable aspect of sociable life. While Pufendorf denies that postlapsarian human beings could be directly responsive to the moral norms through the passions, he was well aware of the passions as a source of motivation for the promotion of sociability. Suitable emotional reactions provide crucial motivational underpinnings to natural law. The article argues that the norms of sociability become operative in social life because social interaction, guided by political governance, enables the moderation of antisocial passions and habituation of sociable emotional dispositions.

De Gruyter’s journal Open Theology is publishing a Topical Issue on Religious Recognition, edited by Heikki J. Koskinen, Ritva Palmén and Risto Saarinen. Some papers have already been published online. Links to the published papers can be found below: 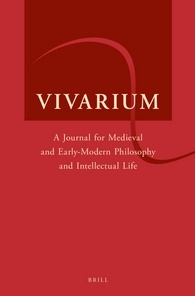 This special issue of Vivarium brings together scholars of Arabic, Latin and early modern philosophy to investigate questions related to subjectivity in historical authors. It aims to accentuate both points of difference and shared ground in the three contexts and thereby to lay the foundation for future work on the history of selfhood and self-awareness in the long and broad Middle Ages. 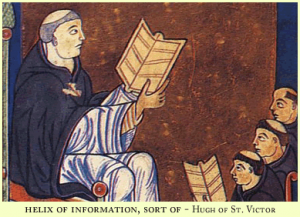 The paper argues that the Twelfth Century spiritually -oriented texts present an important, but often neglected instance of natural theology. The analysis will show that in the texts of Hugh of St. Victor (d. 1141) and his student Richard of St. Victor (d. 1173) we find a Christian Neo-Platonist variant of natural theology. The elements of natural theology form a central part of their larger spiritual programmes, which in turn are meant to guide the human being in her ascent into divine realities and thereby offer immediate experience of the presence of God. The article gives special attention to Hugh’s treatise De Tribus Diebus, as it explores both the manifestations of the Trinity in the created world as well as the beauty of all created objects. Hugh’s account will be supplemented by an exposition of Richard’s idea of experience as a vital means for all knowing. 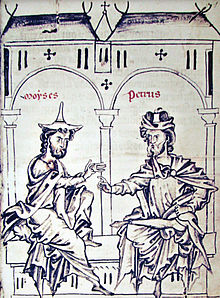 Using interpretative resources from contemporary recognition theory with a special focus on the notion of mediated recognition, this paper discusses the nature and degree of methodological agreement as manifested in three twelfth-century dialogues. The first source to be considered is written by Gilbert of Crispin, and known as Disputatio Christiani cum Gentili (Disputation of Christian with a Pagan), ca. 1093.The second source was composed by the Christian convert Peter Alfonsi, whose dialogue Dialogi contra Iudaeos (Dialogue against the Jews) was written around 1110 (see the picture). The third source to be considered is Peter Abelard’s treatise Collationes, a dialogue with three participants and the narrator, written between 1127 and 1132.

In particular, the paper discusses the role of reason, the principles of argument, and the potentially shared set of rules these dialogues employ, thereby bringing the agreement among conflicting parties into focus. In this respect, the novel interpretative approach based on recognition theory also differs markedly from the standard reading of apologetic texts, which usually emphasizes conflict and disagreement. 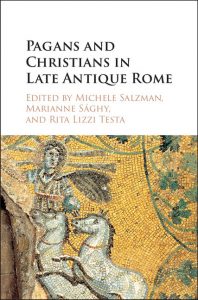 Artis heu magicis procerum dum quaeris honores, / sic, miserande, iaces parvo donate sepulcro  – ‘Alas, while seeking the honours of nobility by your magic arts / you are brought thus low, wretch, rewarded with a tiny tomb’ – this is how an unnamed ‘pagan’ Roman senator is accused of practising magic in the anonymous pamphlet poem often called Carmen contra paganos (Cod. Par. Lat. 8084, v. 110-111). And the same poem, a bit further (near the end of the poem) refers to the ‘magic incantations’ (carminibus magicis) of the widow of the wretched senator.

This is just one example of many labels of magic that were attached either religious rivals or political opponents in the fourth century. In this paper I aim to analyse and contextualize the category of magic tagged to ‘pagan’ cults and ‘heresies’ in the fourth-century. Now, magic has turned out to be a very useful and resourceful and versatile word, indeed – in inter-religious and intra-religious combats. The easiest way to produce a difference, create a boundary, was to label the practices and beliefs of the rival group as ‘magic’.

The article examines the theoretical (i.e., legal and theological) basis for the status of infidels as rights-bearing persons in medieval society by focusing on William Ockham’s ideas on constitutional secular government elucidated in his Breviloquium de principatu tyrannico (A Short Discourse on the Tyrannical Government) composed in 1341–1342. This work is the first essentially rights-based treatise on political theory. In the Breviloquium, Ockham’s aim is to defend the rights of “all peoples” (whether Christians or non-Christians) against the tyranny of the supreme pontiff, namely Pope John XXII (1316–1334) arguing that also the authority and power of the pope (as well as of emperor) ought to be limited by the same rights as the others. 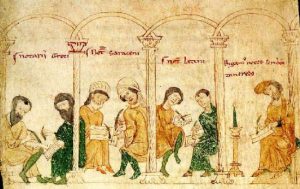 This article is an investigation into the viability of an Islamic concept of religious tolerance. The question is approached by asking how one canonical Sunnī author, the 12th century theologian Fakhr al-Dīn al-Rāzī (d. 1210 CE), interprets those Qurʾānic verses (especially 2:256, but also 4:94 and 10:99) that are commonly introduced in support of arguments for contemporary notions of Islamic tolerance. The somewhat tentative outcome is that Rāzī’s explanation of these verses does provide a systematic basis for religious tolerance.