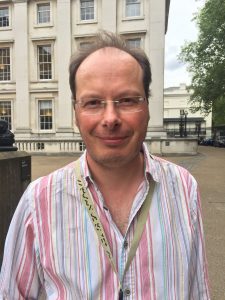 Michael Lewis is Head of Portable Antiquities & Treasure at the British Museum, where he co-ordinates the Portable Antiquities Scheme (PAS): the PAS records archaeological finds made by the public (mostly metal-detector users) in England and Wales, as has been the model for similar projects established in the last few years, notably PAN (Netherlands). He has been involved with recording detector finds since 2000, first as PAS Finds Liaison Officer for Kent, then as Deputy Head of the PAS, and now in his current position. He is also a co-founder of the North Sea Area Finds Recording Group (NorSA). Michael is therefore supporting SuALT as an advisor, and hopes to bring his knowledge and experience of managing a national recoding scheme to the project. He is also a Fellow of the Society of Antiquaries of London, a Member of the Chartered Institute for Archaeologists and a Freeman of the Worshipful Company of Art Scholars. He has a particular interested in medieval small finds, particularly those associated with personal religious devotion. He will take part in the Expert Advisory Panel meetings.

Social media and other information