Welcome to the lectures by Professor, Liu Zuoxiang.

Professor Liu Zuoxiang is the Director of the Institute of Rule of Law and Human Rights, Shanghai Normal University, College of Philosophy, Law and Political Sciences. He is also the Vice director of Jurisprudence Institute of Chinese Law Society; Member of branch of Chinese IVR .

Chinese Structure of Social Order in a Period of Transformation

After China advanced in 1996 the strategy of the rule of the country entitled “administering the country according to law and constructing a socialist country under the rule of law”, which was officially confirmed by the constitutional amendment in 1999, the issue of what kind of social order and structure pattern the Chinese society should undertake became a focus of academic debate in China for some time. Chinese scholars from the discipline of anthropology, sociology, cultural studies and legal studies have challenged the orthodoxy theory of rule of law in China. Professor Liu Zuoxiang’s talk on the “Chinese Structure of Social Order in a Period of Transformation” will discuss the disciplinary perspectives, their differences, and varying conceptions of the contemporary Chinese social order. Afterwards, Professor Liu Zuoxiang will introduce his research on the topic, focusing on the following issues:

Ⅱ. Pluralistically Mixed Order—Main Characteristics of the Chinese Social Order Structure in the Period of transformation

The Relationship between the Party Regulations and National Laws

Professor Liu Zuoxiang will introduce his research on the relationship between the Party Regulations and National Laws.

Welcome to a lecture on Chinese legal history!

Dr. Junqiang Du from Xi’an Jiaotong University School of Law will talk on

“Judicial Reasoning in Traditional China and its Impacts on Modern China”

China’s long legal history is cogently analysed by TUNG- TSU CH’U in the book Law and society in Traditional China. Obviously, there are topics deserving further research and in this talk I would like to focus on China’s old legal system and culture since some of their aspects last for more than 2000 years while others have been subject to some important transformations.

Although the old legal system formally ended with late Qing Dynasty’s legal reform at the beginning of the 20th century, the legal culture of the old system survived and is still alive in modern society in China. For instance, in some special cases, people use such traditional legal culture as a source of their arguments. And for this reason, China’s current judicial reform aiming to improve judicial reasoning also has to take into account the legal culture of the old legal system.

In this lecture, Dr. Junqiang Du, Lecturer in Law at Xi’an Jiaotong University School of Law, analyses the benefits and drawbacks of judicial reasoning in traditional China and argues that such an understanding is also useful to grasp better Modern China. 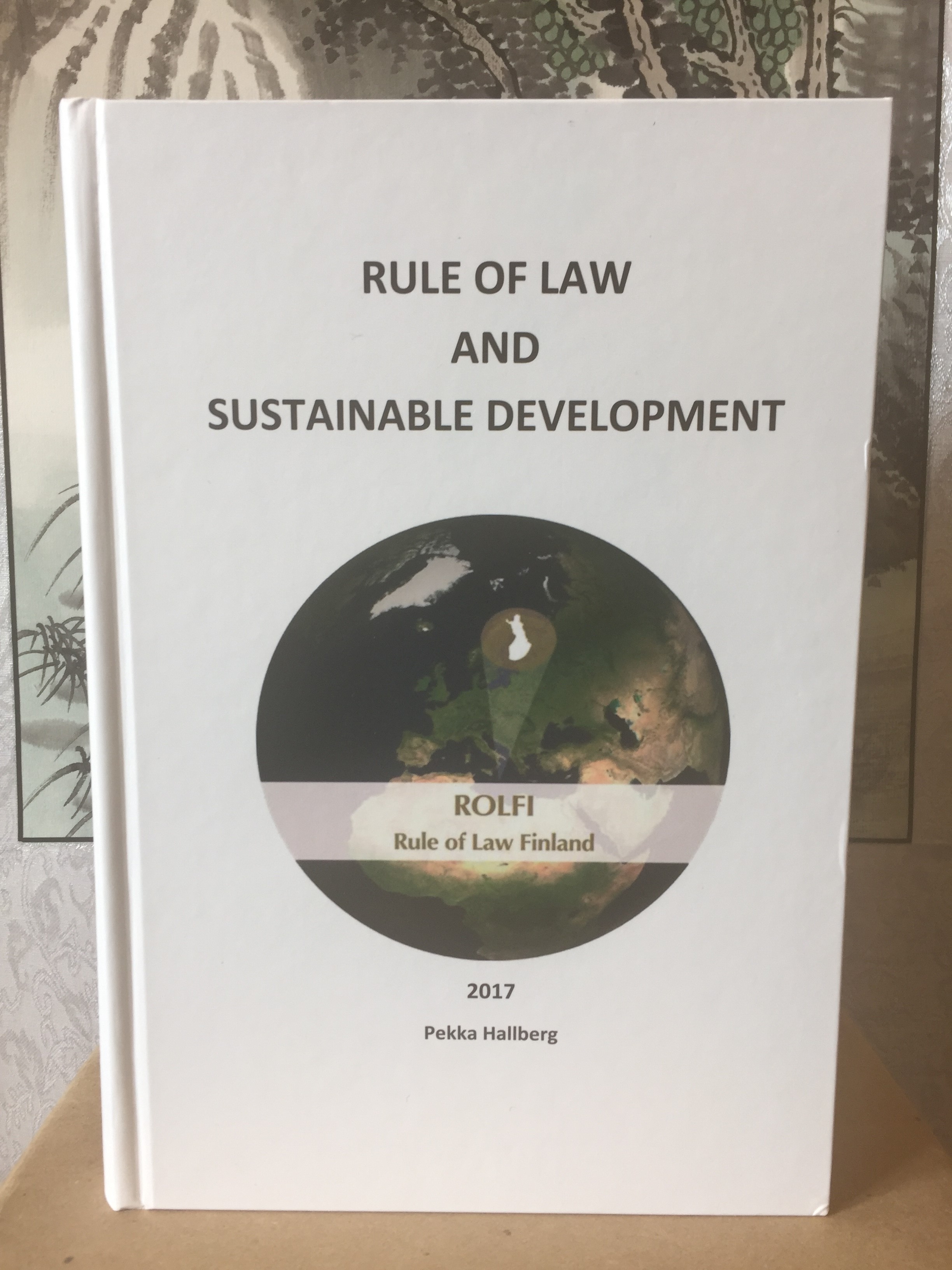 Welcome to the book launch of “Rule of Law and Sustainable Development” (2017) by Dr. Pekka Hallberg, Emeritus President of the Supreme Administrative Court of Finland and founder of the research unit Rule of Law Finland ROLFI.

“Rule of Law and Sustainable Development ” presents a collection of analyses on various aspects of the rule of law and reviews the state of play in different countries. It highlights ways to collaborate in international rule of law development and proposes a comprehensive model for monitoring the rule of law.

The book launch will be kicked off with a speech by the writer, Dr. Pekka Hallberg. Post-Doctoral Researcher Guilherme Vasconcelos Vilaça, University of Helsinki, and Visiting researcher, Dr. Junqiang Du, Xi’an Jiaotong University School of Law, will comment on the work.

Join us to celebrate the launch of “Rule of Law and Sustainable Development”! 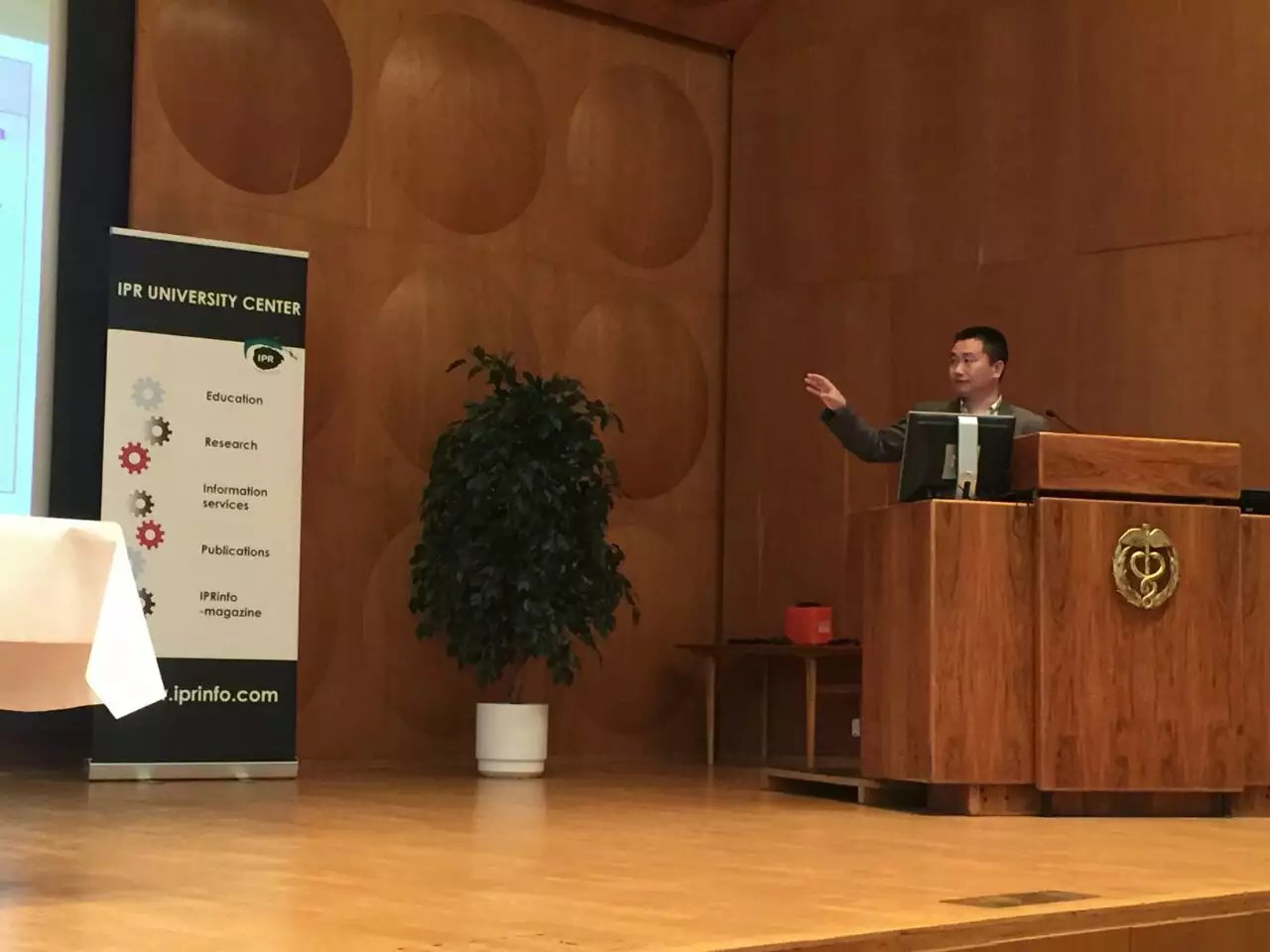 Prof. Dr. Jieming Liu, Vice Dean of the School of Humanity and Law of Wuhan University of Technology（WUT), and Deputy Director of  Hubei Intellectual Property Right (IPR) Research Center and WUT IPR Research Center, held a specialist lecture at Hanken School of Economics, one of the Finnish China Law Center’s Member Institutions, on June 6, 2016. Prof. Dr. Jieming Liu is a Chinese National IPR Specialist and Chinese National Leading Talent of Patent Information. He started his IPR related research and teaching in 2005, and has gained since extensive experience in the field of IPR, especially in the IPR law and policy, and IPR management of enterprises. 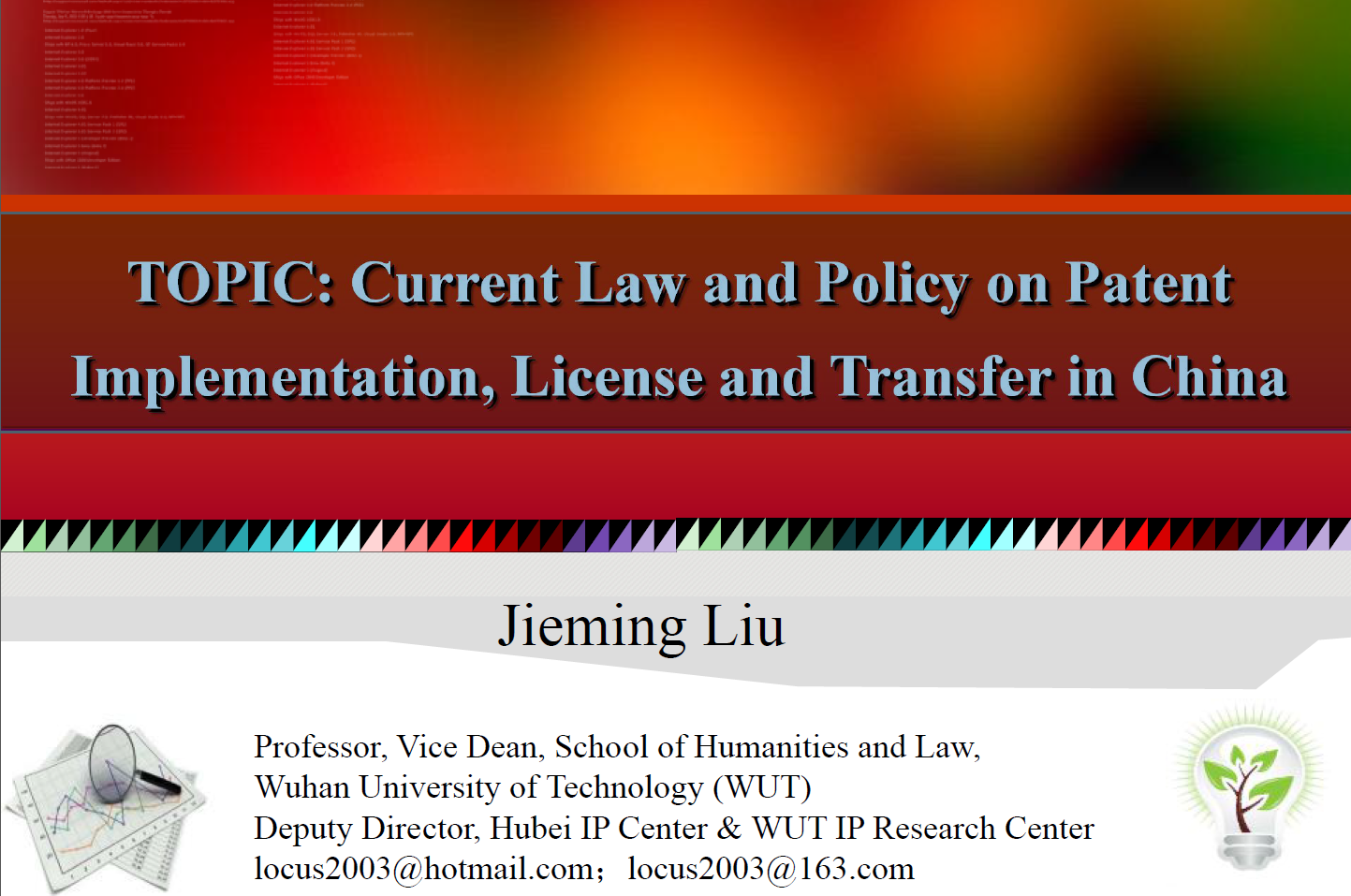 Prof. Dr. Jieming Liu’s lecture covered current laws and policies on patent implementation, license and transfer in China. He underlined that China has taken an active approach to IPR questions. Prof. Dr. Jieming Liu noted that China’s IP system continues to evolve. More attention is paid to emerging practical problems. Prof. Dr. Jieming Liu brought up the broad prospects the development of IP and IP service industry in China have. He noted that the patent transformation and operation continue to develop rapidly. A particular focus of the lecture was on the 4th Amendment to the Patent Law of the People’s Republic of China  (not yet in force) and the Amendment of the Law of the People’s Republic of China on Promoting the Transformation of Scientific and Technological Amendment (Amendment of 2015). 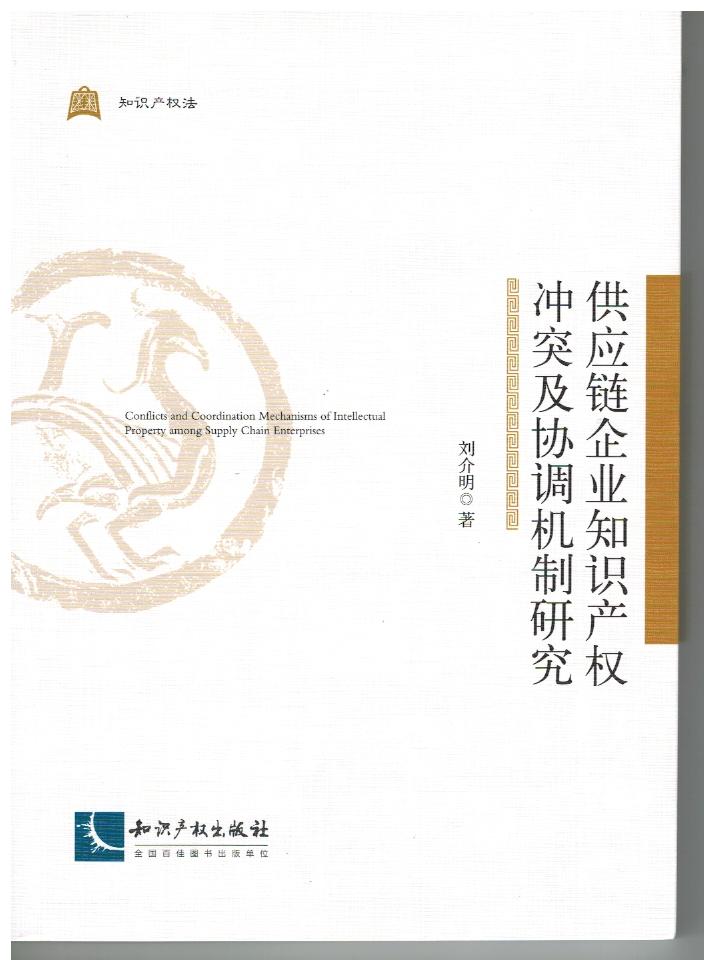 During his visit in Finland, Prof. Dr. Jieming Liu completed and published his monograph “Conflicts and Coordination Mechanisms of Intellectual Property among Supply Chain Enterprises 《供应链企业知识产权冲突与协调机制研究》”.

Prof. Dr. Renwen Liu, Director of the Criminal Law Department of the Chinese Academy of Social Sciences, held a fascinating specialist lecture at the Finnish China Law Center on February 15. The presentation covered many current issues in criminal law from the Chinese perspective, including developments in death penalty regulations, food security, cybercrime and environmental protection.

The burning question of death penalty was discussed in great detail. Prof. Liu pointed out that the number of death penalty crimes has been notably reduced. Amendments in law as well as changes in the attitudes of adjudicators has led to a more lenient criminal policy. For instance, in the past decade the number of annual death sentences has been reduced by half. According to Prof. Liu, in the future this form of punishment will be limited even further to only severe criminals convicted for the crime of murder.

The lecture also dealt with the changes in anticorruption law. Prof. Liu introduced the newly established life imprisonment system for corrupt officials. The system excludes the possibility to commute the sentence and denies the possibility of parole. Prof. Liu specified that the system was created in response to public opinion. Formerly high ranking officials have often been released illegally back into the community, causing discontent amongst the population. The new model of life imprisonment mitigates this problem. On the other hand, Prof. Liu mentioned that the corruption threshold was increased from 5,000 CNY (approx. 680 euros) to 30,000 CNY (approx. 4,100 euros). This amendment has faced criticism as it contradicts with China’s zero-tolerance policy towards corruption.

In addition, the issues of terrorism and cybercrime as well as environmental pollution and food and drug safety were discussed during the presentation. The overall view was that Chinese criminal law was becoming more gentle and humane, and the threshold for the definition of crime against the environment has come down.

After the inspiring lecture by Prof. Liu, a variety of good questions were posed, and Prof. Liu presented extended answers. During the discussion, similarities between the Chinese and Finnish criminal laws were examined. For instance, the challenges of the impact of public opinion on criminal justice policy in the era of populism were explored. The enthusiastic audience included academics, representatives of both courts and ministries as well as students.

The Finnish China Law Center gladly welcomed the Ambassador of the People’s Republic of China to the Republic of Finland, H.E. Mr. Chen Li, to visit the Center and the Faculty of Law at the University of Helsinki on the 10th of February.

After the meeting, the delegation visited the Helsinki University library and the China Law Center library collection. The Ambassador and his family enjoyed the library facilities and were very pleased to see the book collection on Chinese law and governance acquired by the Center through donations and publications, as well as the vast collection of Chinese books in the Asian Studies department of the library.

The visit was very successful. Both sides agreed to keep contact in the future, and recognized the importance of strengthening cooperation. 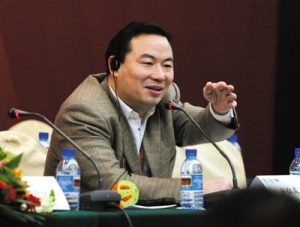 Welcome to a lecture on the developments in Chinese criminal law!

Globalization and increased inter-connectivity has posed new challenges to state governments across the world. Within the past decades, China has become increasingly emerged into the international arena, and is combating many of the same threats as western societies. Developing legislation against non-traditional threats such as terrorism has been an evolving issue, and many advancements have been made in this field in China as well.  Simultaneously, the Chinese government is dealing with domestic concerns such as corruption, as well as international criticism for its procedures in criminal conviction.

To accompany the tremendous pace of China’s economic development, Chinese criminal law has also made leaps to adapt to the increasingly internationalized context. Prof. Dr. Renwen Liu, Director of the Criminal Law Department  of the Chinese Academy of Social Sciences, will present the developments that have taken place in China’s criminal justice, such as new anti-terrorism and anti-corruption legislation. He will also present the reforms in Chinese death penalty, which have resulted in a significant drop in the number of death sentences in the past two decades. 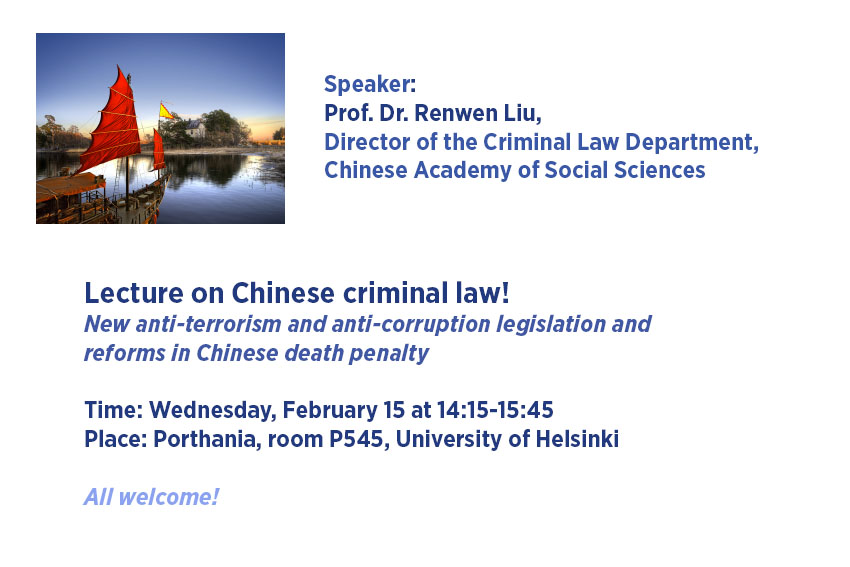 The Finnish China Law Center wishes you a Prosperous and Happy Chinese New Year 2017, the Year of the Rooster!

The collection includes books on a wide range of judicial topics, including legal aspects of business, trade, domestic and international affairs as well as history.

The donated books will be made available to the public later this spring once they have been categorized and recorded.

The Center expresses its thanks to the kind personnel of the Library of Parliament.

You can browse all the books of the Finnish China Law Center’s library here. The books are located on the 4th floor in the Kaisa-talo library in Kaisaniemi, Helsinki.

Aalto University and Tongji University have signed an agreement to establish a new college, Shanghai International College of Design and Innovation (Shanghai D&I). This college will start operating in fall 2017.

Shanghai D&I forms a part of the Tongji University, with which Aalto University has closely cooperated for several years. Already in May 2010, the partners joined forces and opened the Aalto-Tongji Design Factory at the Tongji Campus which now operates as Sino-Finnish Center. Tongji University is among China’s 15 best universities and the leading one, for instance, in the field of architecture as well as and urban and regional planning.

Aalto University and Tongji University have been developing a curriculum based on Aalto’s current high-quality master programmes. These programmes will include International Design Business Management, Creative Sustainability, Collaborative and Industrial Design and Aaltonaut, a multidisciplinary minor subject. Aalto University will produce approximately one-third of Shanghai D&I’s teaching content. Turkka Keinonen, Head of Aalto University Department of Design, notes that the intention is to expand the cooperation later also to research in addition to teaching.

According to Tuula Teeri, President of Aalto University the new college will bring along better opportunities for international cooperation for the Aalto University students and staff. The goals of Shanghai D&I are set high. It aspires to become the centre of design and innovation. Professor Lou Yongqi, Dean of Shanghai D&I emphasizes Shanghai’s potential as a laboratory for new models of higher education in the field of design and innovation.

See the news on Aalto University’s website for further information.