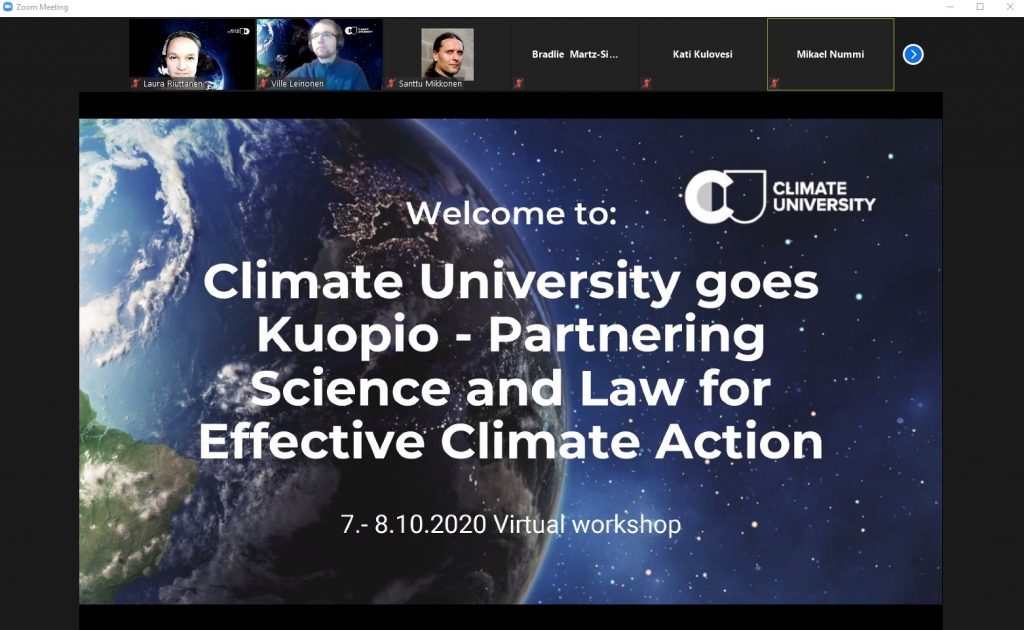 Highlighting the importance of the workshop, we were honored to have the opening words of the first day by Permanent Secretary Juhani Damski from the Ministry of Environment. As the former head of the Finnish Meteorological Institute, he expertly discussed the topic of the workshop and the work done by Climate University on increasing the climate awareness in the larger context. 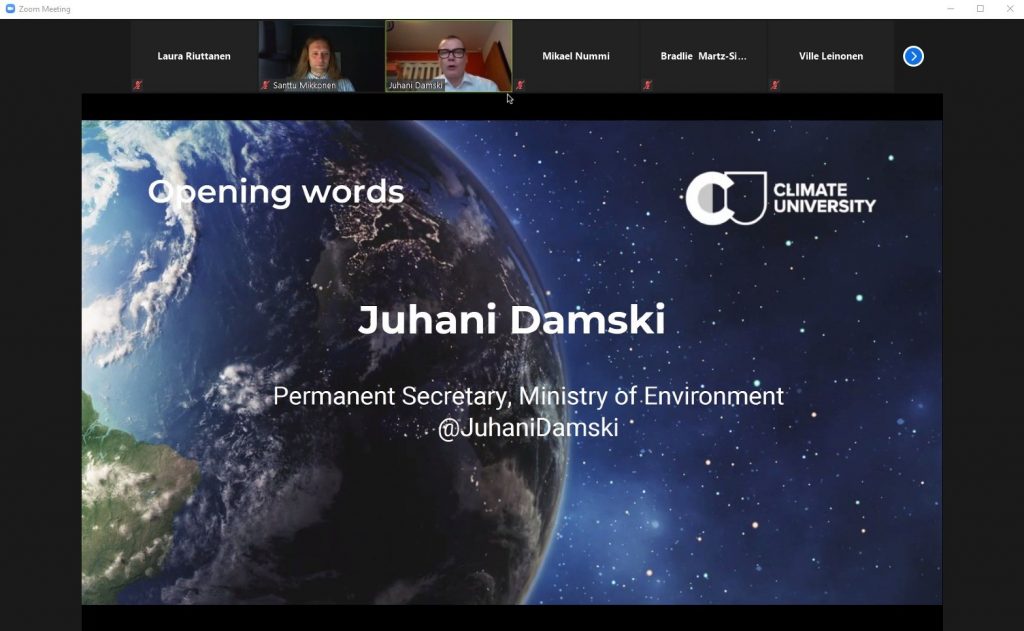 After the riveting keynote, introduction of the workshop themes and schedule, it was time for speed networking hosted by Bradlie Martz-Sigala. This was well-received by participants, as it was really nice to see other participants of the workshop and discuss with them even briefly, as we would have done on the hallway outside of the lecture room in “normal” workshop or seminar.

The science part of the workshop was initiated by research professor Sami Romakkaniemi, who is the head of the Finnish Meteorological Institute Atmospheric Research Centre of Eastern Finland. He gave us extensive overview on the main topics of climatic research, including studying greenhouse gas emissions and aerosol particles, modelling of atmospheric processes in global scale, how the warming of the climate is studied and how it affects our future living conditions and finding ways to slow down or even counteract the warming. The talk was followed by discussions on three interesting topics: firstly on “How to decrease our carbon emissions or turn them to negative”, secondly on “Should we use geoengineering to counteract the warming?” and thirdly on “The role of emission compensations”. 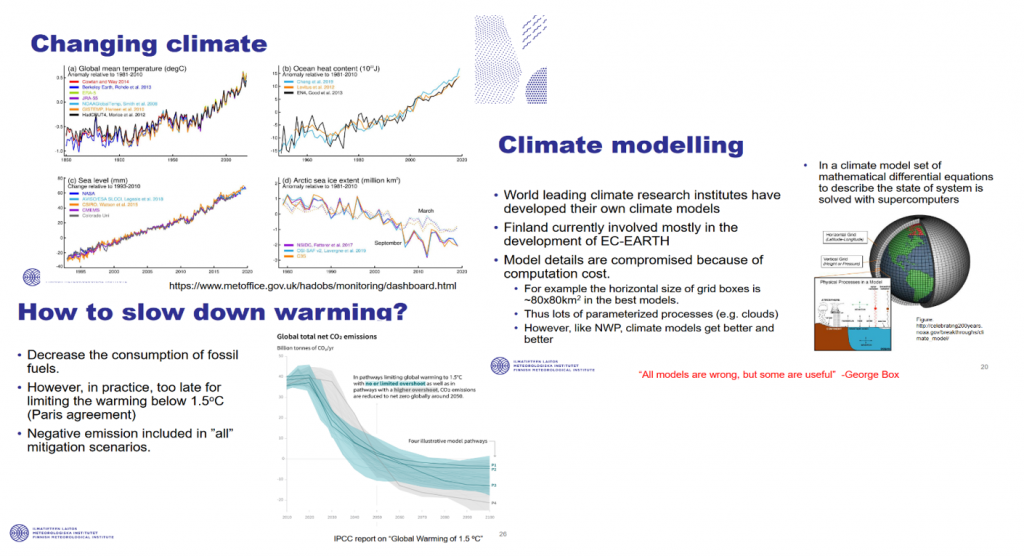 The afternoon was reserved for discussions on strengthening the climate and sustainability competencies of the society. Specifically, by introducing Climate University courses related to sustainability and climate change. For those who were not interested on the courses, we gave opportunity to continue discussion on climate science.

The day was opened by the Academic Rector of the University of Eastern Finland, Professor of Environmental Law Tapio Määttä. He introduced the research done at the UEF on environmental law and science. The talk highlighted the forerunner position of our university in the fields related on climate, both in the fields of science and law.

The keynote of the day was given by Professor of International Law Kati Kulovesi. Her presentation provided thorough overview of the climate law and its importance on the fight against climate change. She also gave attention to international climate negotiations, their importance and difficulties. The keynote session was continued by  Secretary-General of the Climate Panel, Heta Heiskanen. Her main topic was the current status of Finnish climate act, its reform, and how individuals and communities can actively participate in giving their opinion of it.

The Keynotes were followed by breakout sessions on Climate Litigation, led by Prof. Harro van Asselt, International Climate Negotiations, led by Kati Kulovesi, and Consumption Regulations, led by Heta Heiskanen. Each of these special breakout sessions dove deeper into the complexities of climate change law. The International Climate Negotiations session focused on the UNFCCC processes and international stage for the climate conferences (COPs), while Climate Litigation focused on the law suits around the world of citizens taking their governments to court for insufficient climate action. The Consumption Regulation session focused in on the Finnish climate context. 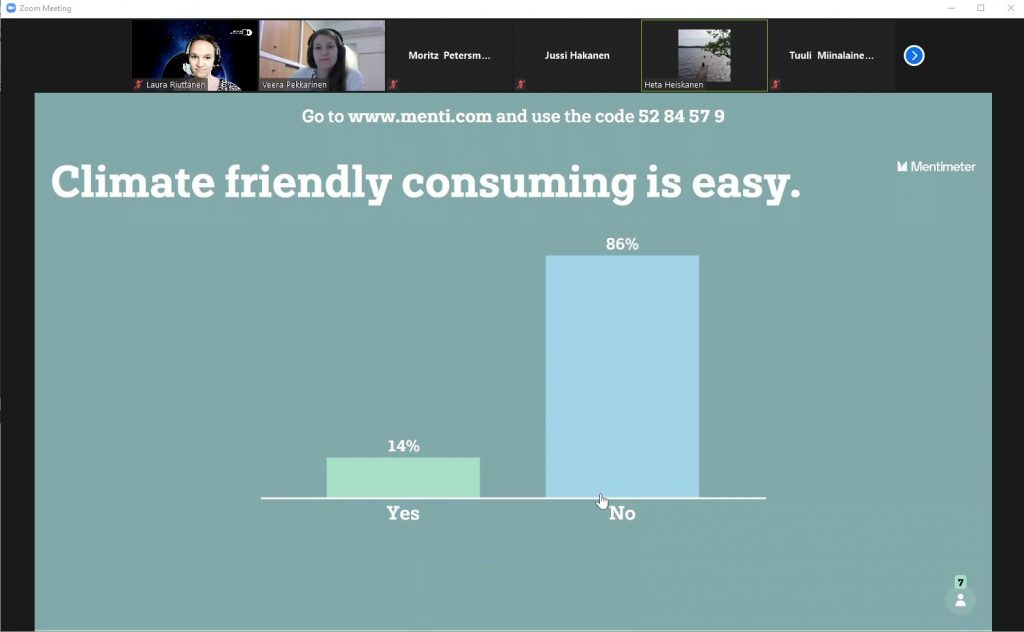 In the afternoon, meetings for teachers of Climate.now and Circular.now courses were held, and most importantly, an exciting discussion on gaps and challenges in climate science and law. The discussions were lively and gave good insight on situations around the world, as the farthest members in our discussion were from Pakistan and Nigeria.

At the end of the day we asked the participants what were the main words they picked up from the workshop. The resulting word cloud is a good ending for our blog posting. Thank you all who participated, and especially great thanks for people who made the workshop happen! 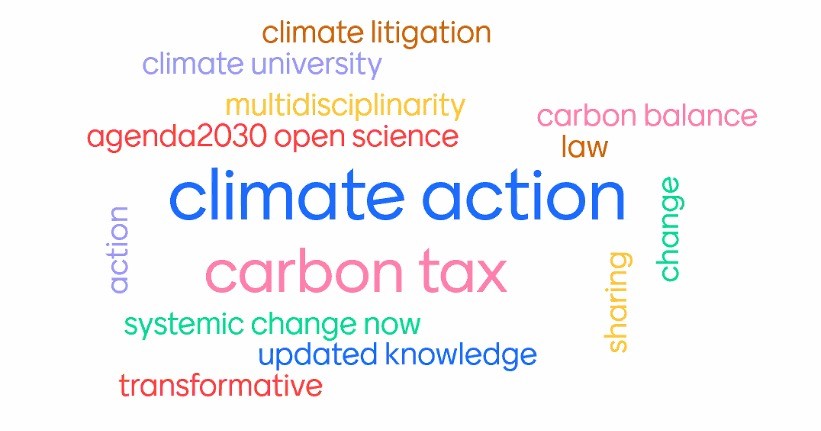