Two years ago, on 28 November 2018, Alexei Navalny, the main Russian opposition politician, announced in his blog a new tool to oppose the regime’s electoral hegemony – the ‘smart vote’. At first glance, the ‘smart vote’ resembles Voting Advice Applications (VAAs), which have become popular in Western democracies since the 2000s. The ‘smart vote’ is designed as an electronic application as well as a webpage and a Telegram bot intended to give the voter advice, how to vote during the course of a given electoral campaign. However, if conventional VAAs compare the positions of the voter with the positions of parties/candidates on a range of policy issues to suggest the former the ‘optimal’ choice, the ‘smart vote’ operates in a more straightforward way. In the candidate-centered campaigns, it recommends the voter only the strongest non-United Russia candidate (or candidates) irrespective of his or her issue positions or party affiliation. Under the proportional representation system, the ‘smart vote’ advises voting for any party but United Russia. The rationale behind the ‘smart vote’, therefore, is to undermine the regime’s monopoly in the electoral realm by encouraging strategic behavior on the voters’ level.

The ‘smart vote’ was employed for the first time in September 2019, when Navalny’s team chose two main targets for the ‘smart vote’. There were electoral campaigns in two biggest cities of Russia: regional legislative elections in Moscow and municipal elections in St. Petersburg. As a result, candidates supported by the ‘smart vote’ won 20 out of the Moscow City Duma’s 45 seats, which was the best opposition’s victory since the beginning of the 2000s. During the St. Petersburg 2019 local elections, the ‘smart vote’ support gave candidates 7 percent of additional votes on average, as Mikhail Turchenko and Grigorii V. Golosov showed. Despite the fact that the ‘smart vote’ had, undoubtedly, an impact on the outcomes of Moscow and St. Petersburg electoral campaigns last year, the question remained, whether this tool is effective outside the capital cities. Russian subnational elections of September 2020 shed light on this question.

Overview of September 2020 Elections in Russia

Navalny’s team proposed ‘smart vote’ candidates for all contests mentioned above[1], but city council election in Sterlitamak (more than 275,000 inhabitants), which is the second-largest city in the Republic of Bashkortostan. In sum, there were selected 1155 candidates to be included in the ‘smart vote’ list for 1171 seats to be distributed in the Duma by-elections, regional legislative elections, and city council elections both in regional capitals and cities with more than 200,000 inhabitants (with the exception of Sterlitamak).

It is noteworthy that, as in 2019, Navalny’s camp chose to focus on two elections for the ‘smart vote’ campaign – city council elections in Novosibirsk and Tomsk. In the run-up to the elections, Navalny himself visited both cities. It was exactly Tomsk where he was poisoned on 2 August by the toxic chemicals structurally similar to those prohibited by the OPCW.

Was the ‘Smart Vote’ Campaign Effective in 2020? 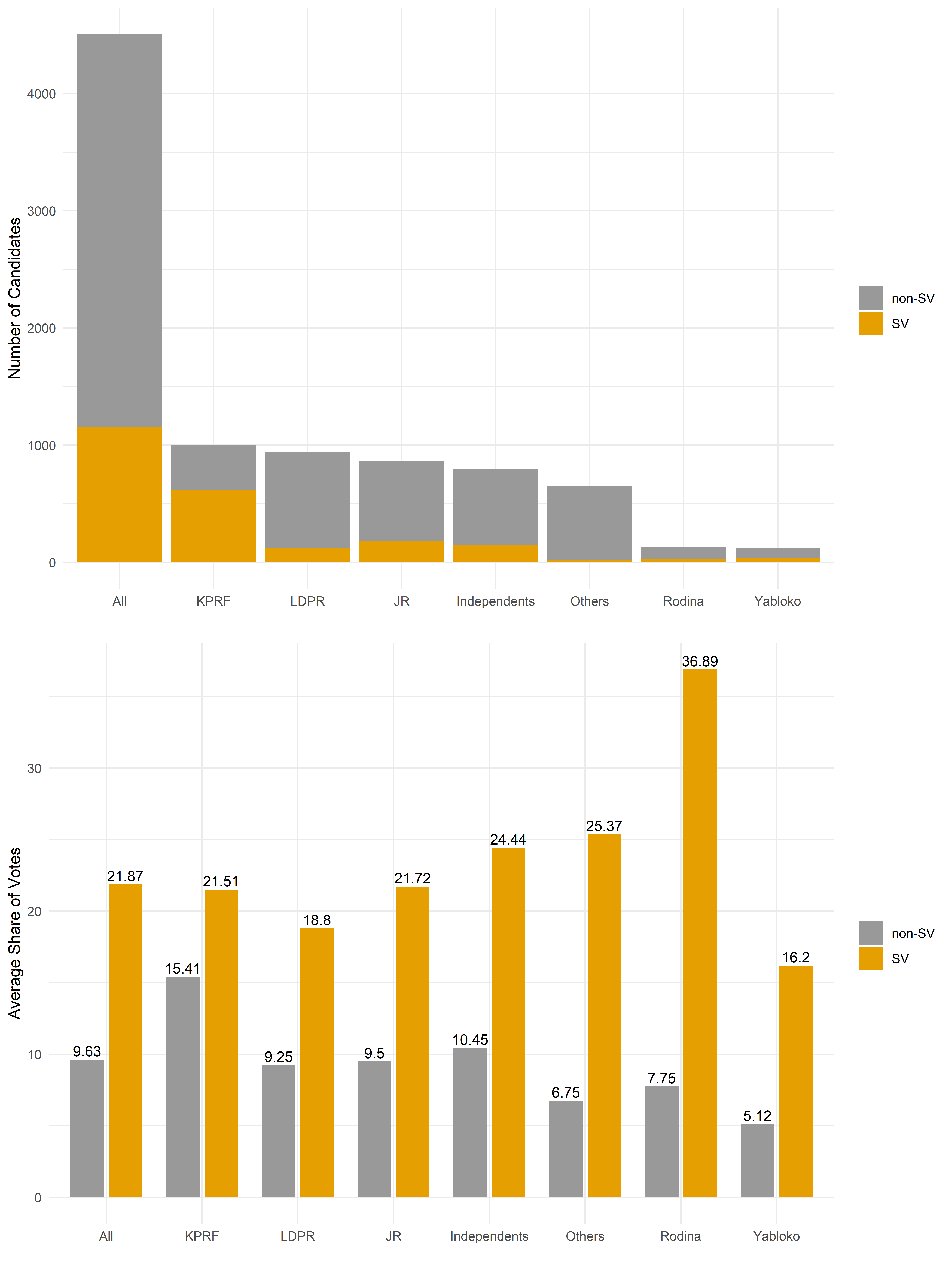 Figure 1, however, cannot indicate, whether some candidates obtained higher electoral results due to the ‘smart vote’ support or they performed better simply because of their personal characteristics or previous electoral experience what, in turn, were taken into account by Navalny’s team when deciding upon including given candidates into the ‘smart vote’ list.

Figure 2. Electoral results of the same candidates in 2020 elections compared to the previous ones[3] (only those candidates were selected who kept the same party affiliation) 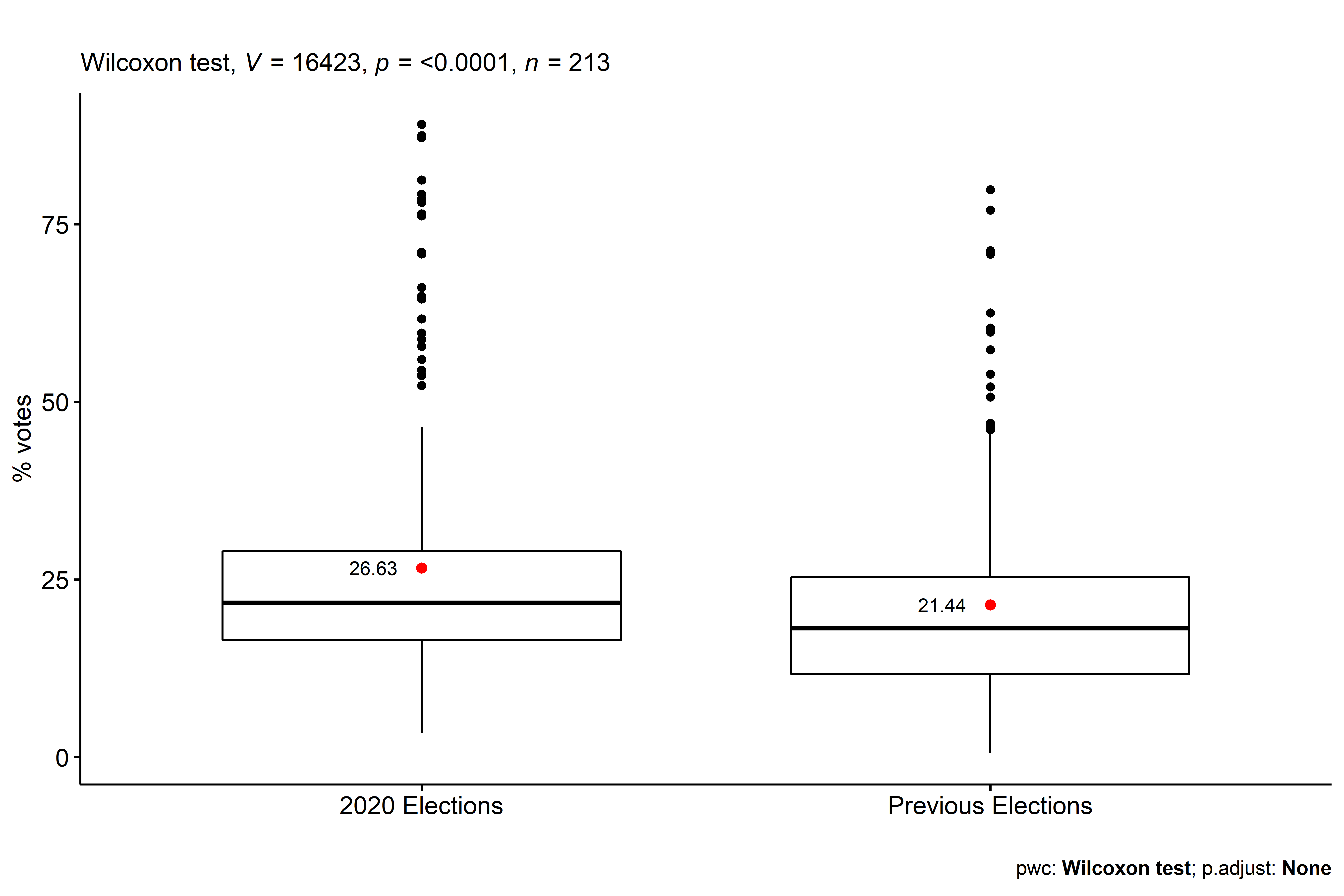 Despite this, and the drop of victory rate from 90 percent in previous elections to 83 percent, United Russia candidates succeeded to win a majority in all regional assemblies and in most city councils. The only city councils, where United Russia failed to get a formal majority were the ones of Novosibirsk, Tomsk, and Tambov. If in Tambov poor United Russia’s results are rather due to idiosyncratic factors – a broad coalition has occurred around an ex-mayor of the city and the Rodina party, then both in Novosibirsk and Tomsk United Russia’s relative failures can be attributed to the ‘smart vote’. The number of ‘smart vote’ candidates got elected in these cities was bigger than elsewhere but Tambov.

The relative success of United Russia candidates in the light of the pressure imposed by the ‘smart vote’ campaign can be explained not only by the skewed playing field but also by a novel multi-day voting scheme when the main election day, September 13, was preceded by two days of early voting. Figure 3 shows that the vote share of United Russia affiliated candidates was positively associated with the share of early voting, while the correlation between the vote share of candidates backed by the ‘smart vote’ campaign and early voting was negative. In Russia, early voting limits the effectiveness of electoral observation, facilitates the task of mobilizing state-dependent voters to go to the polls, and, after all, simplifies the use of electoral malpractice. Numerous irregularities during the early voting phase of the Russian subnational elections of September 2020 were reported by the ‘Golos’ movement. 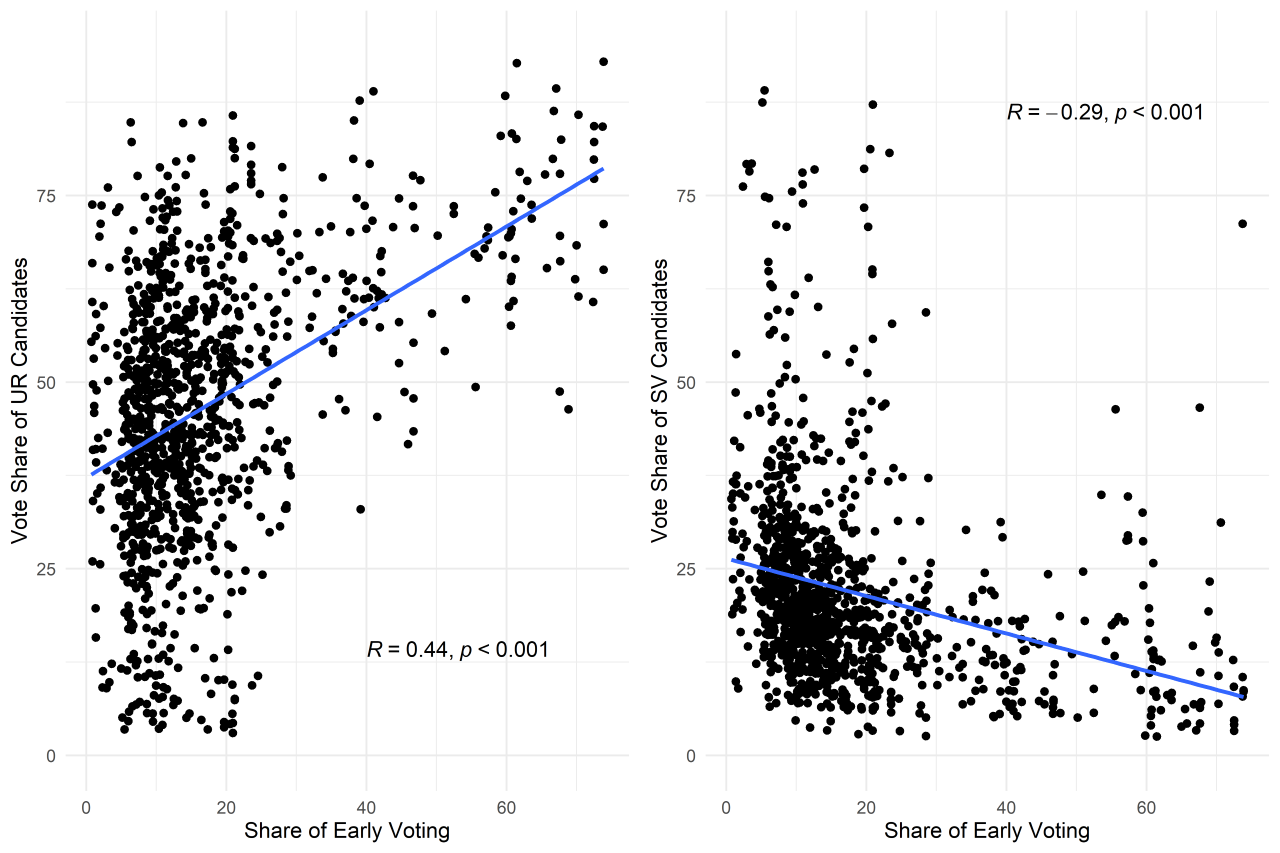 It seems that the ‘smart vote’ campaign boosts electoral results of candidates even outside the two biggest Russian cities. It is definitely bad news for the Kremlin and an encouraging one for the opposition. The ‘smart vote’ can potentially damage United Russia’s score during the Duma elections next year. No doubts, however, that the regime will respond. At least, the provision of three-day voting during all electoral campaigns has already been brought into Russian legislation.

[1] In the case of gubernatorial elections, the ’smart vote’ advised voting for any other candidate than either incumbent or the Kremlin’s nominee which were explicitly named. The reason was that gubernatorial elections were held according to a two-round system when a candidate in order to get elected must collect more than 50 percent of the valid votes cast.

[2] Figures 1-3 are based on aggregated data on legislative elections in 11 regions and city council elections in 22 regional capitals and 11 cities with more than 200,000 inhabitants (except for Sterlitamak).