Declared in response to the Corona crisis states of emergencies had enforced the role of the executive, placing the national governments on the first line of pandemic management. Considering the unprecedented character of the situation, some governments have experienced the ‘rally around the flag’ phenomenon – the rise of support during an external crisis while others have been faced with ‘hyper accountability’ – a severe punishment by the population for an economic downturn and pandemic’s consequences. In the pandemic’s complexity where healthcare and economic crises are linked together, it is ambiguous what factors impact trust formation. In this post, Valeria Caras focuses on economic factors as financial perceptions and unemployment from the comparative perspective. Valeria is ElMaRB project intern and a master’s student of the European and Nordic Studies programme at the University of Helsinki. 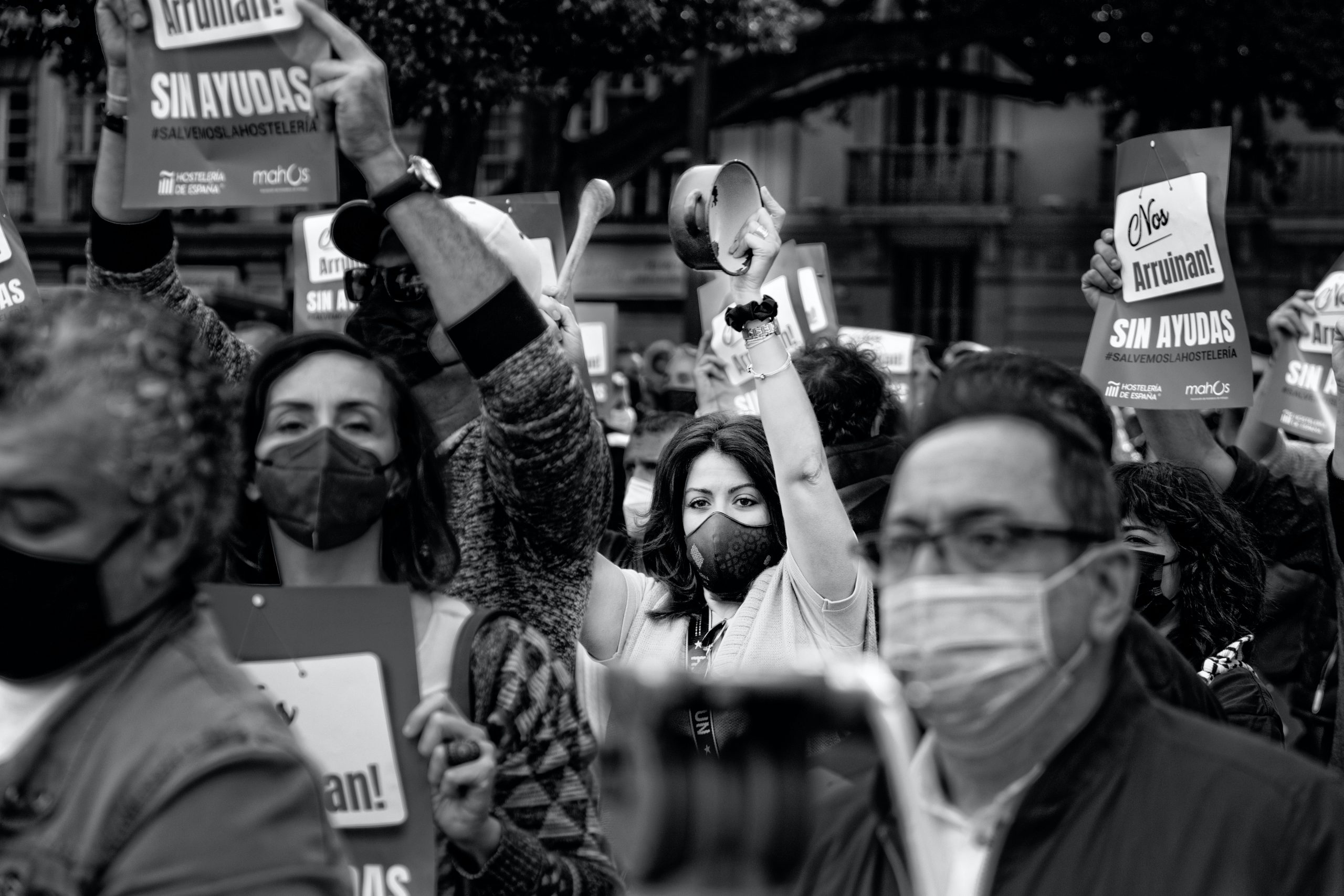 Trust in governments and economic performance

The economy acts as a deriving point for citizens to punish or reward governments in the elections (Powell and Whitten, 1993; Nadeau et al., 2002). When the economy is in recession, unemployment rises, and people earn less, they start to distrust governments and are less likely to vote for the incumbents in the next elections.

During the external shocks, the performance of the economic voting and economy’s impact on trust is sometimes reinforced. The harsh economic downturn can bring significant cuts in the healthcare provisions, austerity measures that enforce social vulnerability, and as a consequence, undermine the levels of trust. The political trust falls due to the unfulfillment of peoples’ demands for higher social protection during the hard times when governments do not introduce enough expansive economic instruments (Kumlin, Stadelmann-Steffen, and Haugsgjerd 2017).

However, the economic perceptions usually deteriorate not immediately as the crisis has started but after the recession accelerates. On the initial stage of the international crisis, people might experience the ‘rally around the flag’ effect – consolidation around the leaders contributing to the rise of their popularity (Mueller 1970). The recent research on pandemic has revealed a strong significant relationship between daily cases of COVID-19 and the approval of eleven world leaders in majoritarian systems, explaining it by the ‘rallying effect’ (Yam et al. 2020); a general increase of both specific and diffuse support in Western Europe (Bol et al. 2020); higher institutional and interpersonal trust on the initial stage of the pandemic in Sweden (Esaiasson et al. 2020). ‘Rally around the flag’ crops up due to limited access to information, decreasing open criticism of the incumbent in the unknown situation (Baker and Oneal 2001), and is characterized by the weakened role of the economic performance evaluations (Schraff 2020). Although the societies can unite around the leaders and governments in the early stage of the pandemic, the rally is usually relatively short-lived in time and may differ between groups. The economic decline coming after strict lockdown policies and the rise of unemployment may cause the harsh punishment of incumbents called in the literature  ‘hyper accountability’ (Roberts 2008). The phenomenon was studied on examples of the Central and Eastern European countries which experienced the harmful transition to the market. The region’s elections are still characterized by ‘hyper accountability’ since incumbents systematically receive significantly fewer votes than in established Western democracies (Jastramskis, Kuokštis, and Baltrukevičius 2019). Facing economic and social consequences of the anti-covid policies, people might become more critical to the governments and judge them for economic performance.

Is it ‘rallying’ or ‘hyper-accountability’ in the EU countries?

The ongoing analysis illustrates that rally and hyper accountability diverge by the groups and contexts. Respondents who are more confident about their financial situation and who managed to keep the job positions tend to experience higher political trust levels. In contrast, individuals whose jobs and finances are already affected by the Corona crisis tend to distrust governments, punishing them for economic losses.

Based on the two waves of Eurofound survey data, I carried out an analysis of how economic perceptions and unemployment status correlate with political trust[1]. The mean of trust is higher in the first round (4.77 points on a scale from 1 to 10) compared to the second (4.63). Finnish respondents followed by Danes on average trusted the government the most compared to other EU member states in the first round.  In both countries, trust has dramatically declined in the second round while Luxembourg occupies the leading position across the EU in the second survey. Besides, the higher than average level of trust in both rounds is in Sweden, Ireland, Austria, Portugal, Malta, Netherlands, Germany, Cyprus, Italy, Greece, and Estonia. Trust in Slovakia was slightly higher than average in the first round but noticeably decreased in the second.  The opposite trend is seen in Spain where trust in government has increased in the second round slightly above average. Among Western European countries, trust in Belgium and France was the lowest and lower than average. However, the minimum trust in both rounds is seen in Central and Eastern European countries where leaders in distrust are Hungary and Poland. 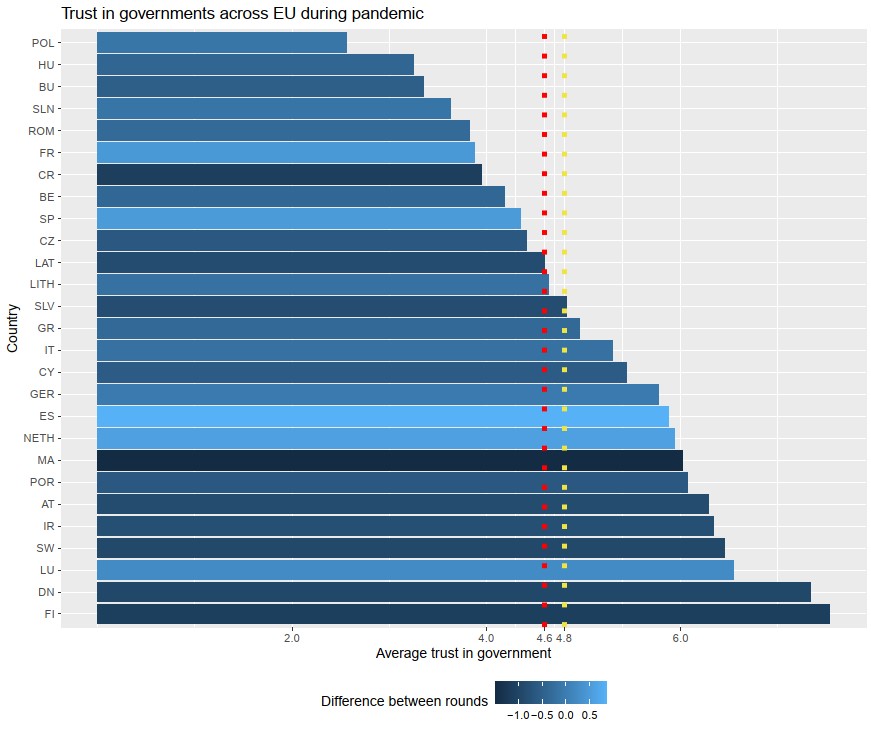 To estimate the relationship between the economic effects and trust during the pandemic, I calculated the average measures of such indicators as losing a job during the pandemic and perceptions of the financial situation in the past and next three months.

As such, people who feel more anxious about their finances in the next free months score lower on trust. Moreover, people were more worried about their future finances during the first round of the survey when lockdowns were in place across the EU, and the general situation was more unpredictable. During the second round, the smaller proportion of people expect their finances to worsen, and the bigger proportion evaluates that their financial situation will remain the same. The change in proportions between groups indicates that people experienced financial distress and anxiety when the pandemic started (Eurofound 2020, 15).

Figure 2. Expected financial situation and trust in governments across EU during the pandemic (Round 1 and 2). 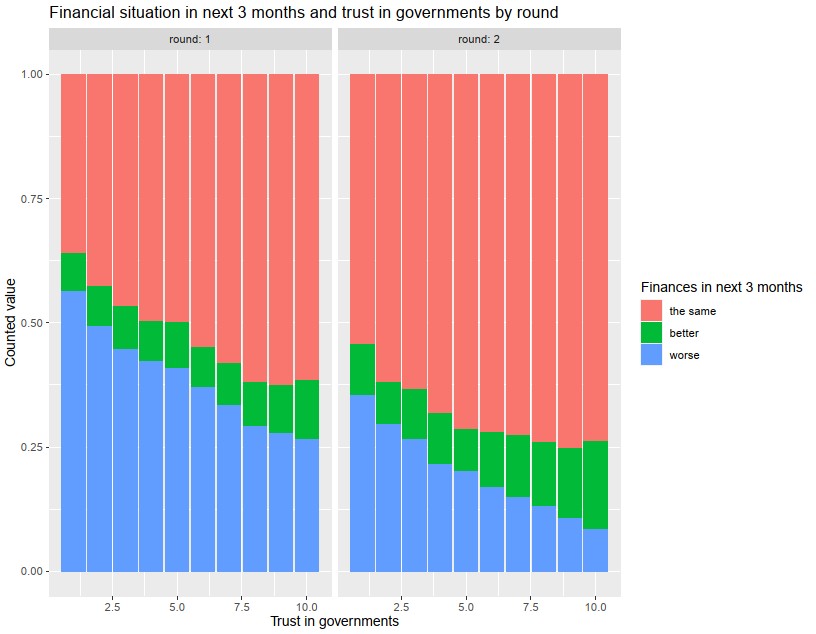 The ratios of respondents who are more worried about their financial situation are higher among unemployed individuals (Eurofound 2020, 15). The harsh lockdown measures and closure of borders to stop the pandemic have impacted employment, especially in sectors like transportation, commerce, and hospitality (Eurofound 2020, 12). Since the onset of the pandemic, 8% of respondents became unemployed across the EU with the highest rate of losing the job in Spain, Greece, Hungary, and Bulgaria (Eurofound 2020). Although there are small differences between sexes regarding employment, the difference between age is more significant since young people under 35 are more likely to be unemployed during the pandemic (Eurofound 2020, 12). Unemployment affects trust negatively and is associated with the lower levels of trust in governments among people who lost their jobs during the pandemic. The mean values of trust are considerably lower for the first group of the respondents, those who became unemployed permanently since the lockdown policies came into power. The mean is also lower among temporarily unemployed people, but the difference is not very sharp among them and respondents who kept their workplaces.

Figure 3. The mean values of trust in governments by losing job status[2]. 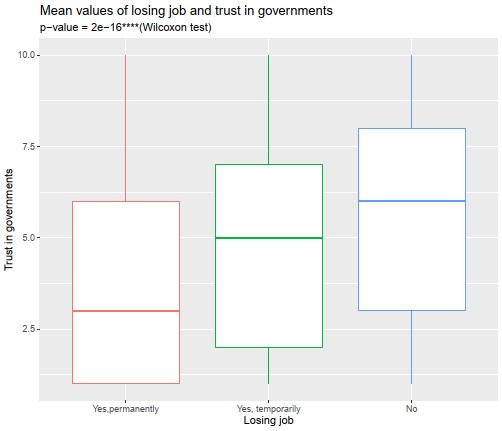 Source: made by the author

Generally, drops in economic growth and unemployment rise are expected to cause the decline of political trust. This analysis demonstrates that during the Corona crisis, trust fluctuates between population groups and contexts. As such, respondents who lost the job on the onset of the pandemic on average trust less in governments than those who kept the job market positions. The unemployed people are keen to hold governments accountable for economic losses, making executives work ‘hyper accountable’. Contrary to them, those who estimated the same or better personal finances and kept the jobs might experience the ‘rally effect’. Among these respondents’ trust in governments is more considerable, and the average level of trust was higher when the pandemic just started. Commonly, the pandemic caused financial anxiety among the respondents, especially in the initial stage when the more significant proportions of people considered that their finances would worsen in the next three months. In general, respondents whose financial situation was worse in the last three months or expected it to worse –  distrust governments higher. Across the EU, Western European countries led by Finland, Denmark, and Luxembourg witness the highest trust in governments, while executives in Central and Eastern Europe are distrusted the most.

[1] The studied phenomena – trust in governments was measured in the Eurofound survey by answering the question: ”How do you trust the national government on scale 1 – [Do not trust at all] to 10 [Trust fully]”. The question was asked among 27 EU member states in two rounds: the first one in early April and May when countries were under strict lockdowns and the second one in June-July when restrictions were less tight.

3 Replies to “How unemployment and perceptions of the economy affect political trust in times of the Corona crisis?”