Today our Doctoral researcher Elena Gorbacheva presented her ongoing research ‘Electoral consequences of environmental protest: The case of Shiyes’ at ElMaRB seminar. Anna Zhelnina, Postdoctoral researcher at the Helsinki Institute of Urban and Regional Studies (Urbaria), acted as a discussant.

The Shiyes protest campaign, which lasted for about 2 years since summer 2018, became one of the most prominent and well-known environmental protests in Russia during the last decade. The protests resulted in success – the landfill project for Moscow waste in Arkhangelsk oblast’ was cancelled and the head of the region, who supported the construction, resigned. But are there any other consequences of the two-year contention?

Elena Gorbacheva examined the political consequences of environmental protests in Russia by studying environmental protests in the Arkhangelsk region against the Shiyes landfill and how they affected the political support of incumbents at the elections of different levels in the region – gubernatorial elections in 2020 and State Duma elections in 2021. Based on the unique protest database for the Shiyes campaign, Elena found that there is a positive correlation between opposition candidates’ results and number of protests and a negative one between United Russia results and number of protests. The effect on turnout is modest, however, the turnout in 2020-2021 in Arkhangelsk was higher than during the previous electoral cycle despite the pandemic. What are the mechanisms behind it? Elena will explore this in her further research. 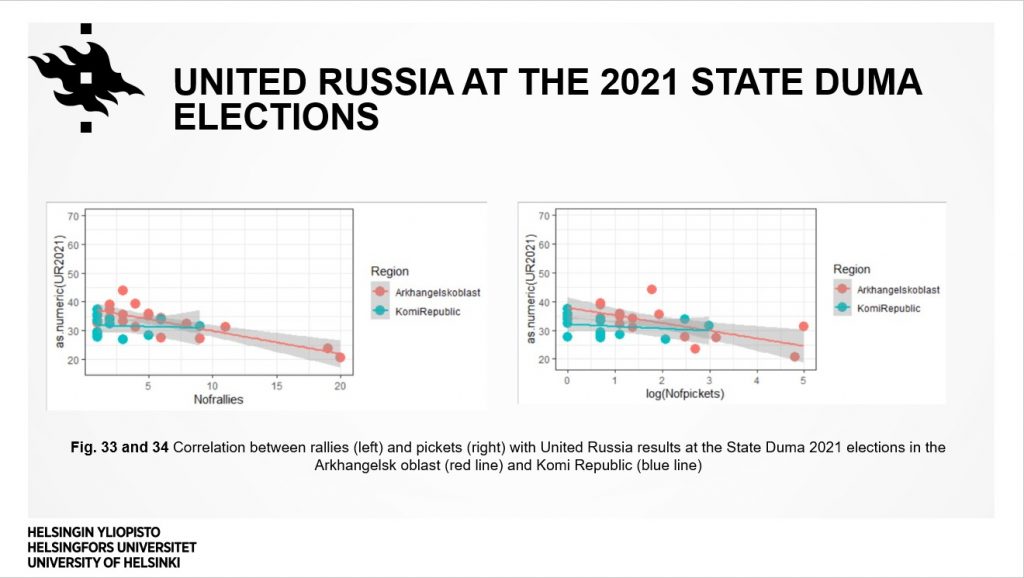