The deadline for applications has been extended to Sunday, May 21. 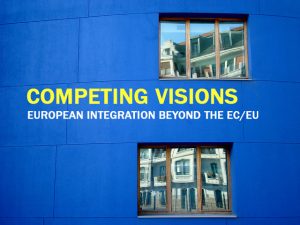 Jointly funded and organised by the

and the Network for European Studies, University of Helsinki

This conference has also received funding from the European Union’s Horizon 2020 Research and Innovation Programme under the Marie Sklodowska-Curie grant agreement no. 658375

European integration research is almost always synonymous with the study of institutionalised cooperation between the member states of the European Community/European Union (EC/EU). But there are a good deal more countries, territories and archipelagos in Europe than the current 28 EU members – including, for our purpose, the Soviet Union/Russia. Moreover, there have been, and continue to be, rather more varied forms of European cooperation, with structures existing variously at a sub-regional, intergovernmental and transnational level, all of which may or may not include some of the current EU28. These often differ from the strict supranational type of integration espoused by the present-day EU in that they prioritise looser, informal forms of collaboration or distinctive organisational structures. And in many cases, European cooperation has extended beyond the economic arena and delved instead into the realm of military and political affairs, environment and social issues, and democratisation, migration, arms control and human rights.

The aim of this conference is to shine a light on these institutional and ideational ‘competing visions’ of European integration beyond the EC/EU. What is their relationship between these alternative forms of cooperation with the Brussels-centred integration? To what extent do they challenge and juxtapose or complement and balance the EC/EU? What have these competing visions meant for the EC/EU experiment? Is Europeanization only an EU phenomenon? Do these visions of Europe create European-ness? Ultimately, what does it mean for Europe and “EU-rope” to have these ‘competing visions’?

We welcome paper proposals from a range of disciplines including area studies, contemporary history, political science, law and economics. Possible topics of interest include but are not limited to:

Those wishing to take part are asked to send their name, position, institutional affiliation and a 300-word (approx.) abstract to competingvisions2017@gmail.com by 30 April 2017. (EDIT: The deadline for applications has been extended to Sunday, May 21). Accepted presenters will be informed by mid-May. General queries can be directed to the conference organisers: Suvi Kansikas (suvi.kansikas[at]helsinki.fi) and Matthew Broad (matthew.broad[at]utu.fi).

We plan to pursue the possibility of publishing papers from the conference in a book of proceedings and especially encourage doctoral and early career researchers to apply.

While refreshments and meals will be provided by the organisers, we ask researchers attending the conference to cover their own travel and accommodation.