In these two days of discussing various interfaces between texts and rituals it has become increasingly clear to me that the category scripture in itself is insufficient to describe the range of venues and contexts where we find biblical material. Tracing the presence and use of biblical text in various contexts, it seems we must treat scripture as an analytic rather than a descriptive category.

Presenting some observations from my own work on Syriac amulets from Late Antiquity, where the references to biblical stories are enigmatic in both their low number and in their vagueness, it was fascinating (and also a bit reassuring) to hear and see the papers from other fields and materials that also grapple with sliding notions and conceptions of scripture and its use in different contexts.

Several presenters engaged with the how biblical text is described and contextualised, exploring the notions of scripture and how this aligns with the biblical texts we find in our sources. Liv Ingeborg Lied (MF Norwegian School of Theology) drew up a thick description of the use of 2 Baruch in a 13th century lectionary manuscript from Deir as-Surian in Egypt, to illustrate that manuscript context and use is more than simply a witness to the 1st-2nd century work 2 Baruch. Benjamin Wold (Trinity College Dublin) addressed the notion and discussion around Torah in 4QInstruction, exploring what Torah here entails and means, and indeed whether this concept, as we know it, is at all present here. Ewa Balicka-Witakowska (Uppsala University) described and showed us examples of the on-going use of scroll-phylacteries in Ethiopia, tracing especially the figure of Solomon and his great magical powers and their use in these scrolls. 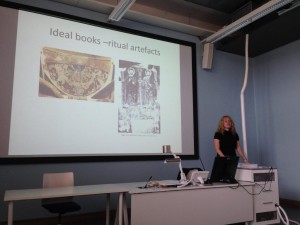 Then, others addressed how scholars identify and categorise elements pertaining to scripture and ritual in our sources. David Shepherd (Trinity College Dublin) addressed the Sotah-ritual described in Numbers 5, and explored various parallels to this, arguing that this biblical trial by ordeal appears to have more in common with Egyptian ritual practice than necessarily the Mesopotamian cases it has been compared to by previous scholarship. Kipp Davis (University of Adger) re-evaluated the criteria for categorisation and identification of small-sized scrolls in the Qumran-material, suggesting that many of their traits point towards a use as ritual objects.

Finally, there was also discussion as to the discursive aspects and trends found in ancient sources when dealing with questions of magic/ritual and authoritative text. Maijastina Kahlos (University of Helsinki) addressed the discourse in early Christianity regarding magic, outlining it as a discourse of othering where bishops and Christian leaders used the label magic in order to mark and condemn practices they disapproved of and were outside their realm of influence. Miira Tuominen (University of Jyväskylä) explored Porphyry’s arguments against the sacrifice and consumption of animals, examining how his treatise On abstinence from injuring animals engages with and conceptualises ritual and its effects.

I find that the papers, in different ways, all addressed aspects of what I have found in my work on Syriac amulets, where, as I mentioned, the use of biblical text or themes appears to be somehow, somewhat unaligned (although certainly not separated from!) the idea of scripture. The fact that such discrepancies, or ambiguities, are also present in so many other historical sources and corpus’ of material are then a comforting reassurance for further work on my material with the idea that scripture is perhaps not best used as a descriptive category, but rather as an analytical category. And the papers and discussions in this workshop on text, ritual and magic have furthermore provided me with many new avenues for approaching these questions.

I therefore want to thank the organisers and our hosts from the CSTT and RRR centres of excellence here at Helsinki University, as well as all the participants, especially the respondents whose excellent contributions I did not have space to include in my text here, for two wonderful days, and I hope we will be seeing more of each other in the future!

1 thought on “Scripture and/or scripture – Reflections from the joint RRR/CSTT Workshop on Text, Ritual and Magic, April 14th-15th”