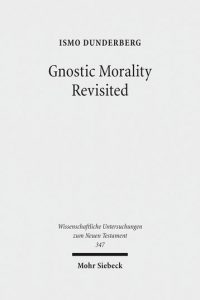 The early Christian texts discussed in this book are often treated as “gnostic” ones. The studies by Ismo Dunderberg collected here, however, approach them as witnesses to the views of educated second-century Christians engaged in dialogue with philosophical traditions. Following the idea that ancient philosophical schools first and foremost provided their adherents with a way of life, the author explores issues related to morality and lifestyle in non-canonical gospels and among groups that were gradually denounced as heretical in the church. Prominent themes he deals with in this book include the soul’s progress from material concerns to a life dominated by spirit, the control of emotions (such as desire, anger and grief), the avoidance of luxury, the ideal “perfect human” as a tool in moral instruction, classifications of humankind into distinct groups based upon their moral advancement, and Christian debates about the value of martyrdom. In addition Dunderberg offers a critical review of some recent trends and attitudes towards New Testament scholarship, especially those in which the non-canonical texts discussed in this book are either ignored or deemed as irrelevant, irrational, and sometimes even dangerous.