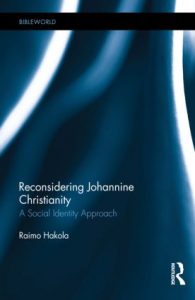 Reconsidering Johannine Christianity presents a full-scale application of social identity approach to the Johannine writings. This book reconsiders a widely held scholarly assumption that the writings commonly taken to represent Johannine Christianity – the Gospel of John and the First, Second and Third Epistles of John – reflect the situation of an introverted early Christian group. It claims that dualistic polarities appearing in these texts should be taken as attempts to construct a secure social identity, not as evidence of social isolation. While some scholars (most notably, Richard Bauckham) have argued that the New Testament gospels were not addressed to specific early Christian communities but to all Christians, this book proposes that we should take different branches of early Christianity, not as localized and closed groups, but as imagined communities that envision distinct early Christian identities. It also reassesses the scholarly consensus according to which the Johannine Epistles presuppose and build upon the finished version of the Fourth Gospel and argues that the Johannine tradition, already in its initial stages, was diverse.