Heikki Haara defended his doctoral thesis titled as Sociability in Samuel Pufendorf’s Natural Law Theory on March at the University of Helsinki. 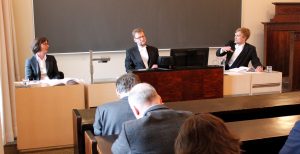 Most of you have visited in the beautiful building behind you, the National Library of Finland. In the library’s special reading room you can find an impressive number of seventeeth and eighteenth-century editions of various books written by Samuel Pufendorf. I once counted that there are 83 copies of Pufendorf’s works that were published during these two centuries, some of them are in original Latin, some in various vernacular translations. This is hardly suprising since professors consulted Pufendorf’s writings when preparing lectures and students studied them in law and philosophy syllabus in the The Royal Academy of Turku, the first university in Finland. In 1823, after the Great Fire of Turku, the university and library was moved to Helsinki and was renamed the University of Helsinki in 1917.

Pufendorf himself had a personal relationship to the Swedish Empire, an emerging European superpower at the time. While holding a professorship at the University of Heidelberg, he made a career move by accepting a position as professor primarius of the law of nature and of nations and of ethics and politics at the newly established University of Lund in 1668 and served later on as a political adviser and a royal historian in Stockholm.

However, Pufendorf’s popularity was not merely a peculiarity of the intellectual life of early modern Swedish or Finnish universities. His reputation all-over Europe is most clearly exemplified in the number of editions and translations of the main source of my dissertation, his magnum opus on natural law, De jure naturae et gentium (On the Law of Nature and Nations, published in 1672). More than forty-five editions appeared up to the end of the eighteenth century. The work was rapidly translated into French, English, German and Italian. Its short textbook version De officio hominis et civis (On the duties of man and citizens, published in 1673) enjoyed even more popularity and guaranteed Pufendorf a place in curricula in many European universities for a century and was, for instance, translated into Russian, comissioned by Tsar Peter the Great. Until the second half of the eighteenth century, Pufendorf was the most widely-read moral theorists in Europe. His writings formed a common language and more or less shared problematic for various intellectuals who confronted certain lines of his thought and came to accept others and in that way wowe these into the fabric modern moral and political thought. 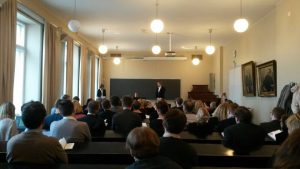 Pufendorf’s natural law philosophy centres on the concept of sociability (socialitas), a fundamental moral principle imposed by God and recognized by reason. According to Pufendorf, “any man must, inasmuch as he can, to cultivate and maintain towards others a peaceable sociability”. To what extent is sociability and social life natural for human beings? Or is it merely an adventious artifice in order to protect political stability against man’s selfish and antisocial passions?

Although these have been a recurrent questions in the history of western thought since antiquity, late-seventeeth century marks a shift in the conceptualisation of human sociability. Reformation, numerous devasting wars, moral skepticism, the rise of mechanistic philosophy and the birth of the sovereign states increased anxiety to explain which parts of our nature render us fit for and inclined towards a society. Pufendorf, like his famous predecessor Thomas Hobbes, challenged the Aristotelian conception of man as a naturally social and political animal, denying that the psychological or physical features of humanity could be directly interpreted as teleological moral ends in human nature. For Pufendorf, sociability has to be imposed upon naturally unsociability and morally value-neutral human nature. Natural law requires that people develop attitudes and dispositions of sociability that render them useful citizens of civil society.

Pufendorf’s treatment of sociability is mainly normative rather than descriptive. Moral agency consists largely in being subject to law of sociability and carrying out moral and political duties imposed by such law. The bulk of De jure naturae et gentium deals with identifying and demonstrating what norms and institutions are needed to maintain and cultivate sociability, such as property, money, family and the state. Pufendorf aims to show that these norms can be find in empirically observable structures of human nature and the experience of history. However, it is one thing to demonstrate the content of moral norms but a different task to explain how people in practise become aware of their content and motivate themselves to act accordingly. How ordinary people in practise adopt sociability as their norms? How the norms of sociability become effective in social life?

These are the main research question of my dissertation which focuses on Pufendorf’s psychological and social explanations of sociability. In it, I explore the moral psychological assumptions underlying his theory of sociability by identitifying and piecing together the central parts of his remarks and observations on human psychology.

My study demonstrates that Pufendorf’s anthropology is based on the multivalent view of human nature and the acknowledgement that individuals differ widely from each other. Each individual responds to the things in his or her specific ways. Different individuals may motivate their actions simultaneuously by through varying and conflicting motives, such as the internal obligation to moral norms, self-love, fear of God, fear of civil punishment, the inclination to self-preservation or the desire for esteem. Moreover, dispositions of passions and intellectual capacities may vary among different ethnic groups as well. For instance, in his historical works, Pufendorf argues that Germans are “not over-hot in their passions, so they are very constant and have souls very capable of Discipline and instruction.” In turn, the Finns are rural, stiff, and prejudiced people, and yet exceptionally hard workers, which makes them ‘‘more proper for Fatigue and downright Labour than for such Work as requires Ingenuity and Dexterity.’’

Pufendorf does not give a clear-cut explanation of one ultimate source of motivation that moves people to to perform the duties of sociability. The central argument advanced by me is that sociability is largely a socialized product of particural society that we happen to live in. Pufendorf’s natural law theory includes the mechanism by which social interaction habituates people to internalize moral norms and govern their passions and actions so as to cultivate sociability. Many scholars have understandably highlighted how fallen man’s corrupted passions constantly undermine the functionality of society. In my dissertation, I shall argue that, if properly guided by political qovernance, human passions and inclinations, may play a positive motivational role in social and political life, and serve as the most effective means to get people to internalize the norms of sociability.

What I seek to establish in this study is that Pufendorf’s moral psychology intersects with and complements his political philosophy. The most obvious novelty of this approach is an attempt to exemplify that moral psychological formulations are important for Pufendorf’s theorizing of social and political order. For instance, the belief that people have the capacity to control their passions and actions as a precondition of moral accountability is a theme that runs through Pufendorf’s works. Moral obligations differ fundamentally coercion. This contributed to his view of the role of political governance. Pufendorf argues against Hobbes, that fear is not the ultimate passion that civilizes men. Instead, People should be habituated to accept social life with ease. Thus, the sovereign should ensure that citizens conform themselves to civil laws not so much from fear of punishment as from habit.

Michel Foucault, among other has argued that sociability become a new matter to “police” from the seventeeth century onwards. In my study, I argue that Pufendorf conceives the sovereign state as an necessary institution to combat antisocial passions and to develop passions required for maintaing social tranquility. The internal life of citicen’s becomes a concern of the state. In this sense, his writings provide a conceptual bluebrint for eighteenth-century integration of govermental sciences such as cameralism and Polizeywissenchaft into the discipline of natural law. It was Pufendorf’s insights into stabilizing powers of habits that led him to acknowledge the role of political governance in the process of turning individuals into social and political animals through habitual socialisation.

Moreover, Pufendorf’s theory of sociability can be seen as one of the first steps away from the scholastic and teleological idea of the perfectability of human nature towards a more “sociological” (to use an anachronistic term) understanding of morality and politics. It is no wonder that some of his eighteenth-century followers describe Pufendorf as “socialist”. It is often noted that Pufendorfian language of sociability offered a conceptual platform for the discussion of morality for numerous authors of the Scottish Enlightenment. While eighteenth century responses to Pufendorf are beyond the scope of my dissertation, I hope that my study illuminates that Pufendorf’s observations on habits and passions as a source of motivation for the promotion of sociability resonate interestingly with the eighteenth-century discussion on social and psychological processes as the foundation of morality.

To conclude, Pufendorf’s theory of sociability intriguingly combines two conflicting approaches to morality. On the one hand, he is a natural law theorist who bases the obligation to cultivate sociability on the commands of God, which are recognized by reason. On the other hand, sociability is not merely a normative rule discovered by reason. It is through the set of social practices that humans internalize sociability as their moral standard. Though Pufendorf’s main aim is to demonstrate what the divinely imposed universal natural law norms are, his numerous perceptive remarks and observations on moral conduct as an internalized product of society points towards to the moral-psychological emphasis on habits and passions as a mechanism of sociability. Perhaps, it was these conflicting commitments what maked his writings appear so profound and stimulating to his contemporaries.

In the evening, we celebrated Heikki’s defence in warm and social atmosphere. 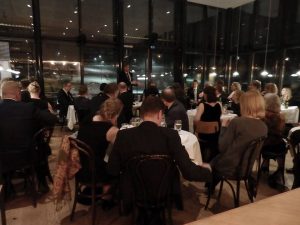