Our postdoctoral researcher is publishing her new book “Arctic Energy and Social Sustainability”:

In recent years the Arctic has become the focus of political, popular and scholarly debates around the future of our world’s Energy. Increasing consumption, dwindling reserves, climate warming and developing technologies are expected to push energy-related activities ever further into the previously inaccessible north. Within this framework, energy in the Arctic is predominantly understood as synonymous with oil and gas production for international exports; meanwhile, any social sustainability concerns associated with energy-related developments remain largely neglected or reduced to regional socioeconomic concerns.
Lempinen adopts an alternative approach, exploring how energy and its societal aspects are defined and debated in the context of the circumpolar north. Combining an in-depth conceptual discussion on energy and the social dimension of sustainability with an empirical focus on the scientific and political “truths” produced about energy and society in the Arctic energyscape, this book is an enlightening read for students, scholars and professionals interested in issues related to energy and society in the Arctic or beyond. 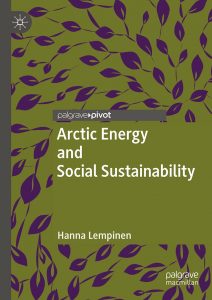 The book is published by Palgrave Pivot and can be ordered from here.