A new report “China in the Arctic; and the Opportunities and Challenges for Chinese-Finnish Arctic Co-operation” by the Arctic Centre of the University of Lapland has been published today. Our postdoctoral researcher Sanna Kopra has contributed to the study, which is a part of the publication series of the Government’s analysis, assessment and research. 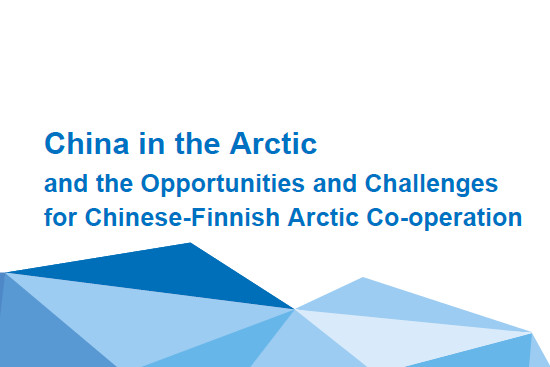 The Arctic region is rapidly transforming from a peripheral region to a global theatre with an increasing number of non-Arctic stakeholders. One illustration of this transformation process is the growing presence of China in the Arctic. This report first discusses China’s changing role in global affairs (Chapter 1). This provides background for exploring China’s interests, role and presence in the Arctic. The study of China’s presence in the region is carried out through the lens of the Chinese government’s four priority areas towards the region as expressed in the country’s first official Arctic statement – the White Paper – from January 2018 (Chapter 2). Further, Chinese interests and actions in the Arctic are studied from the viewpoint of one particular Arctic State, Finland. The authors provide an overview of a broad spectrum of Chinese-Finnish interactions in different contexts, including investments in Northern Finland and co-operation within the areas of Finnish Arctic expertise and research. In addition, concerns and risks related to interaction with Chinese actors are discussed (Chapter 3). Over the past decade, China has undertaken an effort to demonstrate its growing knowledge of, and commitment to, the Arctic region. Some actors and experts are concerned about China’s aims and actions in the region, while others express hope for Chinese institutions, investors and companies to contribute to regional development and knowledge-building. The report presents a balanced and multifaceted, although necessarily not fully comprehensive, picture of China’s rise as an actor in the Arctic.

The report is available online.

One Reply to “China in the Arctic; and the Opportunities and Challenges for Chinese-Finnish Arctic Co-operation”