From 17th of February to 2nd of March this year our postdoctoral researcher Alla Bolotova was on her second field trip within the Wollie project to Kovdor. Kovdor is a small industrial town with 16 thousand inhabitants, located in Murmansk Oblast of Russia, some 20 kilometres away to the East from the Finnish border. Previous fieldwork was conducted in an urban-type settlement Revda, which is also in Murmansk Oblast, but this trip was a special one – Alla Bolotova herself was born and grew up in Kovdor. Now, returning to the town after many years, Alla was interviewing young people aged 15-30 that are facing same dilemma that she had – stay, leave, or return to Kovdor after getting higher education elsewhere?

Education is one of the important factors determining youth’s motivation to leave the town – school graduates can only get vocational training in Kovdor with very limited choice of professions available. Most professions are men-oriented, preparing for work at the mining industry, so girls and boys with different interests are pushed to leave the town. Lack of education, relevant for modern youth, is a general problem for most northern single industry towns, and Kovdor is no exception here.

Kovdor indeed resembles many other industrial towns in the Russian North: a large carbonatite mine is located next to the town, and Kovdorians are employed at the “Kovdor’s Mining Plant” (Kovdorsky gorno-obogatitelny kombinat, or Kovdorsky GOK), currently owned by the EuroChem, a large nitrogen and phosphate fertilizer company headquartered in Zug, Switzerland. The enterprise is quite successful, but still the population of Kovdor is rapidly decreasing every year. According to Alla Bolotova, most school pupils, interviewed for the Wollie project, are eager to leave the town after finishing school. However, there are also some young people returning to the town after getting education elsewhere and starting the families: Kovdor is a rather compact safe town, with cheap apartments, while salaries in mining sector are relatively high. Also, help of grandparents and other relatives becomes quite important when young families get children.

But what is in Kovdor for the youth? There are several state sport clubs and schools, associations at the vocational training college and schools, various dance and other interest clubs at the local House of culture and libraries, however, many of them encounter problems trying to attract young people to their formalized activities. There is a youth club formed as a grassroots initiative called “Prityazhenie”. It appeared in 2015 as result of cooperation of several young workers wishing to create an alternative leisure place for working youth, and later got registered as an NGO. This independent youth centre organises variety of events, such as music concerts, film screenings, language clubs, meetings for playing board games, etc. The centre and its activities are funded mainly by the young working people themselves, but for several activities they also got small-scale support from the Eurochem company and from the Federal Agency for Youth Affairs. 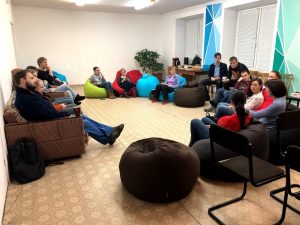 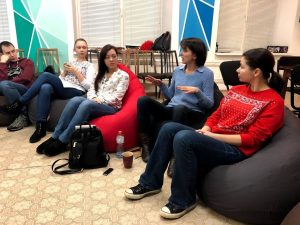 Alla Bolotova at the open discussion about Kovdor and its attraction for youth.

As was mentioned earlier, Kovdor is situated indeed very close to the border with Finland, but there is no border checkpoint, therefore Kovdorians have to take a long bypass route to the East to Kandalaksha and then to the South and back to the West to Allakurti and Salla border crossing point, which adds extra 300 kilometres to the ride. Many residents of Kovdor believe, that creating a new border crossing would significantly change the life in the town, releasing it from the plight of the dead-end location. At the moment Kovdor is also not so inviting for local tourism because it is one of the most distant towns from the regional center Murmansk: it takes 4 hours to drive from Murmansk to Kovdor by car, while very attractive Khibiny mountains with well developed tourist infrastructure are situated twice closer to Murmansk.

And yet, there have been positive changes in the town recently, which many Kovdorians attribute to the change of the city leader: according to their opinion, in a short period of time the new head of Kovdor district Sergei Somov succeeded to get streets regularly cleaned from snow, to renovate and decorate the parks, to make public events and celebrations more interesting. In 2019 an agreement was made to create a “Territory of advanced socio-economic development” in Kovdor. In the future that will make the town more attractive for new investors, who can get tax benefits, if they locate their business in Kovdor and provide work places for locals.

In cooperation with Eurochem Sergei Somov also supports the initiative “Kovdor – the capital of Hyperborea” (Kovdor – stolitsa Giperborei). The project is aimed at developing tourism in the Kovdorskii district, where several megaliths were found. Supporters of this project suggest that the megalithes and other artifacts indicate that Kovdor is located in the centre of the mythical land Hyperborea. Many young Kovdorians are in favour of the project too; however, for some locals it is unclear what actually Hyperborea means and how can young people relate to it. Alla Bolotova thinks that EuroChem should pay more attention to make this project understandable and attractive for the local population instead of focusing predominantly on the external PR. Another challenge for “Kovdor – the capital of Hyperborea” is Russian Orthodox Church’s condemnation of the initiative, as it belongs to pagan culture.

Kovdor, like all other single industry northern towns, has its own ups and downs. For now it seems that both the young people and the administration are doing their best to bring more diversity to the activities in the town, and their efforts can be seen.