From 20 to 26 of May four researchers of our group, Sohvi Kangasluoma, Elena Gorbacheva, Francesco Durante, and Stephanie Hitztaler, were in Novy Urengoy, Yamalo-Nenets Autonomous Okrug of Russia. Novy Urengoy is an industrial city located in the Russian Far North with one of the largest gas fields in the world, and is one of the towns included to the study of Wollie project. Together with the researchers of our group, Professor Florian Stammler, Principal Investigator of the project from Finnish side, and Associate Professor Aytalina Ivanova, Principal Investigator from Russian side, also traveled to Novy Urengoy to study youth welfare in the city. 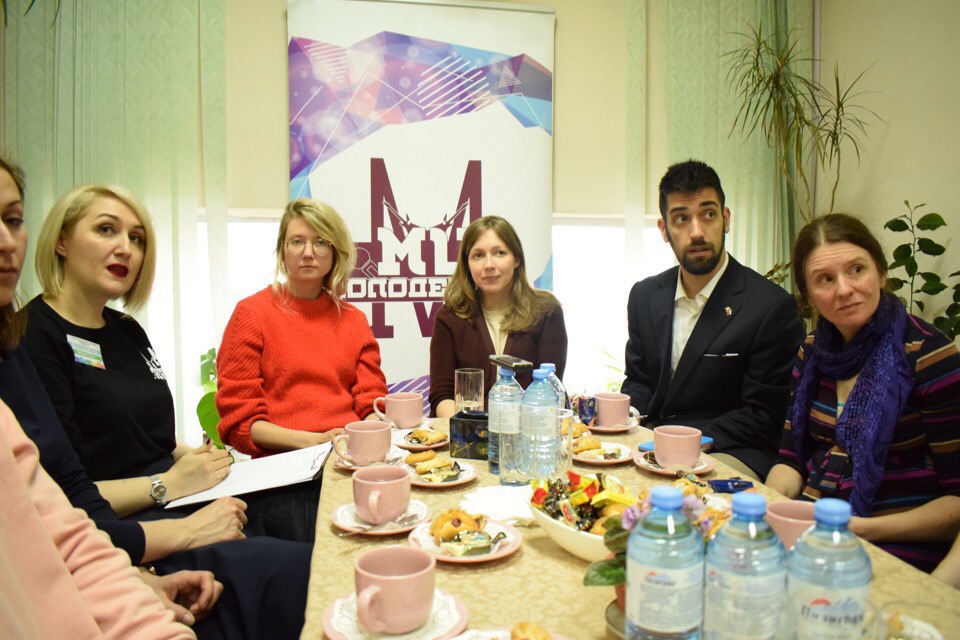 Even though the trip took place in the end of May, spring has not yet started in Novy Urengoy. the average temperature was around 0 degrees Celsius, and it snowed for one day. People from the region say that they have 9 months of winter, brief spring, 1 week of beautiful autumn, and 1-2 months of relatively hot summer, but citizens of Novy Urengoy try to leave the city during this period of time and travel to some warmer place with the sea. When speaking to the citizens, the often voiced idea was that despite the beauty of the Russian North, the climate is not great for long-term living, and many of the citizens dream to earn enough money, retire and move “to the Mainland”, which basically means any region that lays southerner.

Another big challenge of living in Novy Urengoy is a lack of higher education options. If school graduates do not want to study in Gazprom technical college or multi-profile college, they have to go study elsewhere. Thus, there a certain population gaps, with not so many young (17-24) and retired people in the city.

Not all of the youngsters are happy to leave the place: they love their city and home, but they are forced to move away if they do not want to connect their lives with oil and gas industry. Some of the youth return to Novy Urengoy after completing higher education, and say that the reason for doing this is the love for their hometown, good salaries,  and wide range of opportunities for self-realization.

Also, Novy Urengoy is a great place to raise kids. First, there are several support programmes, both federal and regional levels, that provide certain benefits to young families. For instance, from first of June new parents will be receiving maternity packages (similar to the Finnish ones). Second, Novy Urengoy provides a wide assortment of activities for children and the youth, starting from sport clubs and finishing with project development workshops, where young people are taught to write grant applications to get funding for their initiatives. The amount of youth clubs and activities in Novy Urengoy is truly impressive. Children there can practice biking, archery, handcrafts, gym, dancing, rap music; get to know ecological and volunteering work; learn photography and information technology, etc. And all of these things are free.

During their trip, the researchers visited several of the youth clubs, met with city and regional authorities, young workers of Gazprom; were invited to visit mosque and local hospital, attended “Last Bell”, school graduation holiday. The researchers also attended the award ceremony of “EcoNur” project.

The project was launched two years ago in cooperation with City management and Children art centre to pursue the goal of educating the population to recycle. This year, several schools had collecting stations organised once a month, where children and their families could bring plastic bottles and metal cans. Most active teenagers, classes, and schools are awarded with different prizes. This year, according to the organisers, 18000 people participated in “EcoNur”, which is around 15% of the total city population. The researchers observed, that indeed a lot of people in Novy Urengoy do take care of their environment. Apart from participating in “EcoNur”, they organise environmental actions and events, take part in “Arctic future” project, and so on.

The researchers got an image of Novy Urengoy citizens being a friendly, active and multinational community. Officially, representatives of more than 40 peoples live there. The variety of different national cultures present in Novy Urengoy can be vividly seen at the Centre of national cultures, where Chuvash, Nenets, Ukrainian and all other peoples, including indigenous and those who came to build the city in the 1970s, preserve and share their national traditions and heritage.

Novy Urengoy and its citizens left a very positive impression. Despite harsh climate conditions and certain infrastructural challenges, people care for their hometown and want to make life in the city better.