This November four Doctoral candidates of our research group, Francesco Durante, Elena Gorbacheva, Karoliina Hurri, and Sohvi Kangasluoma, taught a Master-level course they created, named “Contemporary Environmental Issues in the Russian Arctic”. One of the course assignments was to write a blog post on one of the topics related to the environmental issues in the Russian Arctic. In our blog, we want to publish two best posts written by the students. The first text, published in this entry, is written by Ellen Ahdekivi, a student at the Environmental Change and Global Sustainability (ECGS) Master’s programme.

Mysterious craters in the Yamal peninsula – A ticking time bomb in disguise?

Welcome to the Yamal peninsula – a vast, harsh and desolate territory, home to few people in the world. It is an environment that shows little evidence of human settlement and development, other than some gas pipelines and the occasional reindeer herder. However, this faraway land has become a headline in recent years. A particular phenomenon is likely providing unexpected evidence of anthropogenic repercussions which no one knew were taking place in the Russian Arctic. And it has the possibility to have an unprecedented effect on how we view climate change and its effects both on a local and global scale.

So what exactly is going on in the Yamal peninsula, and what does it have to do with anybody for that matter? Well, in 2014, a 60-metre sink hole, which was later followed by several more, was discovered accidentally, and its origin was an utter mystery to scientists. Naturally, this stirred conversation amongst the scientific community and others to speculate its origin – ranging from UFOs, meteorites to collapsed gas facilities hidden from the public. In short, there was quite a bit of debate on the origin of such a dramatic and powerful change in the landscape. What on earth could cause such a phenomenon?

As it turns out, the likely explanation is a process that is induced by human action. Scientists now believe that the craters are the result of a build-up of methane gas in pockets of thawing permafrost. Hurray, the mystery has been solved! But what does this reveal about the state of the Russian Arctic? To be honest, it reveals an alarming process that can have the ability to alter the Earth’s atmospheric greenhouse gas intake alarmingly.

Since discovering the crater in 2014, several more similar ones have been found. These are directly located in the Yamal peninsula, meaning that their origin must be locally induced. Climate data from Siberia shows an increase in average temperature that supports the findings, which is an indication of wide scale permafrost thawing. Because permafrost works as a large storage for soil carbon deposits, degrading permafrost works as a releasing force for carbon dioxide and methane emissions. This in turn, creates a vicious cycle; releasing emissions that amplify the effects of climate change, create more opportunity for thawing permafrost.

The formation of these black hole-like craters is a big wake up call for people all over the world. As the warming of the climate continues, the Arctic is projected to be warming two-times faster than the global average. Hence, there is little room for negligence and disinterest. The environment, in this case the Yamal peninsula, is sending warning signals on the fact that business as usual activities can no longer continue without significant repercussions, where these craters are not isolated incidents. The build-up of methane in these permafrost soils represent a ticking time bomb which is waiting to go off. This may also indicate a point of no return regarding permafrost degradation. Although these newly formed craters do not affect local communities on a spatial scale, the craters affect local populations through the amplification of climate change – through coastal erosion, infrastructure failure, changing living conditions and other significant effects of climate change. The mysterious craters of the Yamal peninsula are a representation of what humans are truly capable of doing without direct intention. It begs us to ask the question – what are we capable of doing if we determinedly strived to prevent similar events from happening in the future?

Image: The first crater B1 which was discovered by helicopter pilots. 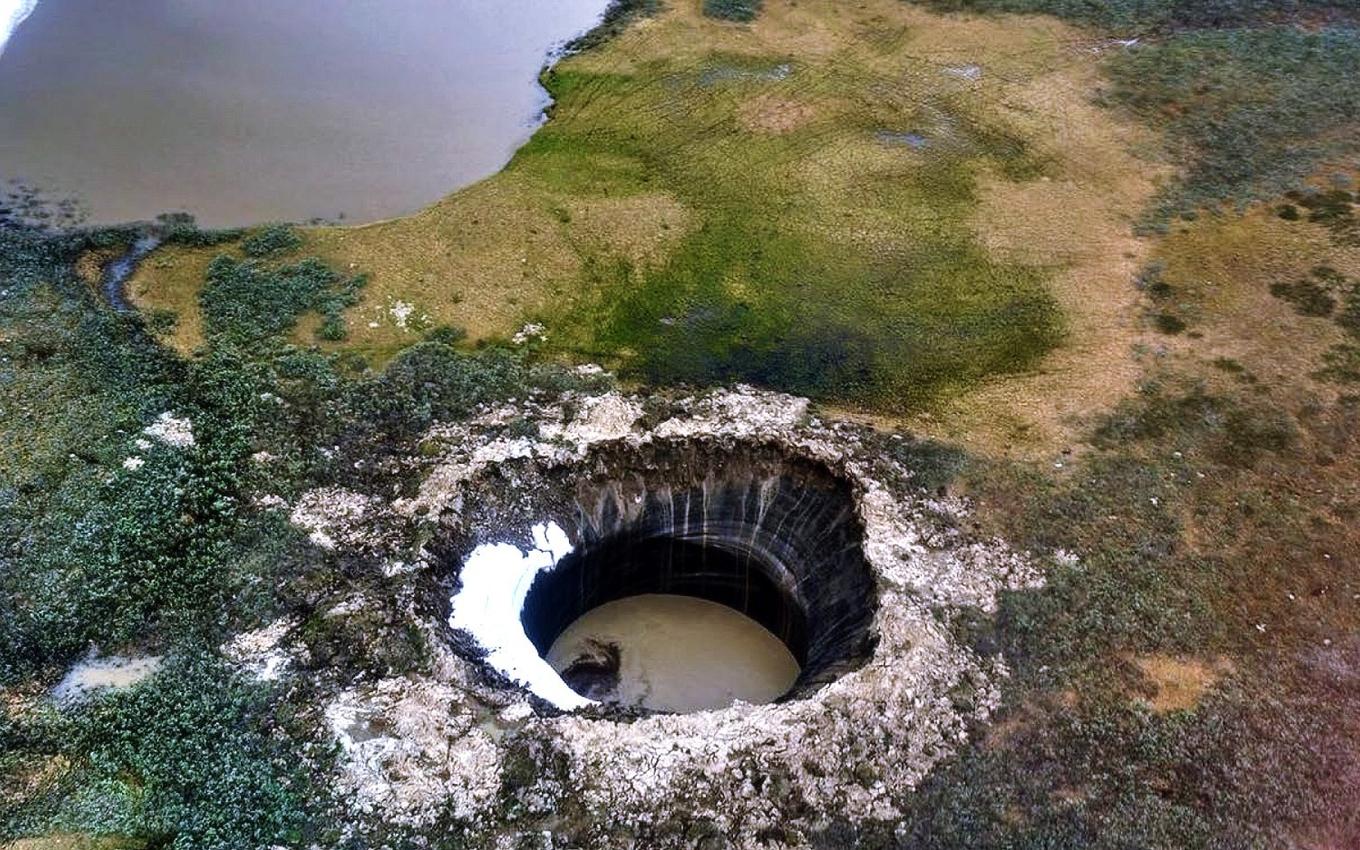