One of the most time-demanding steps of research project is collecting the research material. Occasionally, however, it is possible to co-operate with a corporate partner which can arrange the collection smoothly. One such example is the alliance professor Olli Vapalahti and Archipelago Doctors (Saaristolääkärit) formed a few years ago.

Archipelago Doctors Ltd is a company operating a minibus circulating in coastal Finland and providing medical services, e.g. vaccinations.  Customers have got increasingly interested in vaccination against TBE, tick borne encephalitis virus, as the virus has become more common. In 2017, 82 people in Finland were infected. 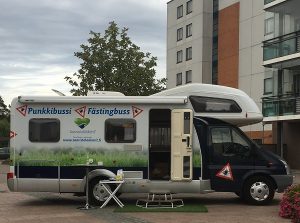 The tick bus (Punkkibussi) parked close to the entrance of a big shopping mall. Citizens walk in to get vaccinations and deliver tick samples both from humans and animals.

In summer of 2017 Dr. Olli Vapalahti’s research group launched together with the Archipelago Doctors a crowdsourcing-based project encouraging residents of Espoo and Lauttasaari to collect ticks and bring them to the TBE bus. The ticks, no matter if they originated from nature, human skin or animal fur, were all frozen and delivered to Vapalahti’s laboratory to be further examined.

During the summer season altogether 665 ticks from Espoo and 88 from neighboring Lauttasaari were studied. About 10 % were infected with TBE. At present Vapalahti is preparing a scientific paper together with the Archipelago Doctors. Thanks to university – company partnership, the citizens now know which areas are infected with the pathogen. Whether the people avoid these areas or take the vaccination is their own decision. 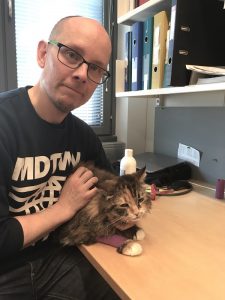 One of the tick samples from Siberian cat Amur was found to be TBE positive. Veterinarian Lauri Kareinen took a blood sample from the cat in order to study the virus antibodies.

Business collaborator of the year 2019

When business professionals are looking for quick discussion about certain research field, the answer is a Cup of Science meeting. Read more