On 29 November 2019, Björn Ahl, Professor from University of Cologne and President of the European China Law Studies Association, gave a guest lecture at the Finnish China Law Center. The topic of his presentation was ‘Judicialization in Authoritarian Regimes: The Expansion of Powers of the Chinese Supreme People’s Court’.

Professor Björn Ahl aimed to demonstrate how the Chinese constitutional system works and what the position and function of the Supreme People’s Court (SPC) are through this lecture. He firstly introduced the global phenomenon of the 20th-century judicialization, under which, judicialization can be distinguished into two forms: expansion of the courts’ scope of action at the expense of politics, and the absorption of methods of judicial decision-making by other executive and legislative state organs.

The development of judicialization has been seen in three layers. First, legal discourses, legal terminology, legal rules, and procedures diffuse into processes of judicial decision-making. Then, courts expand their competence and increase their influence over the outcomes of political possesses. And finally, courts decide important political questions. These can be reflected from the development of the Chinese legal system. While some scholars stated that there was no judicialization in the authoritarian legal system, Professor Ahl contended that the strengthened rule of law in China can also be observed in the development of other constitutional systems.

As a One-party system concentrates powers of decision-making in the organs of the Chinese Communist Party (CCP) and in the executive organs of the state, Chinese courts, particularly the SPC become an integral part of the party-state structure and political institutions. This, as Professor Ahl presented, has led to some special feature of a limited and reversible judicialization in China as dynamics have been seen as intrinsically local’ and courts rely on party support and active engagement of administrative agencies under administrative litigation. 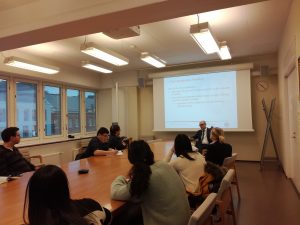 As for the SPC, Professor Ahl said that motivated by institutional self-interest, it was now less influenced by party leadership or legal reform ideologies and had transformed into a relatively autonomous policy-making organization. He then analyzed from four aspects of SPC: Fundamental rights in courts, self-empowerment through judicial interpretations, guiding cases mechanism, and mandatory death penalty review power, in which Professor Ahl emphasized the last three aspects and how they worked under the current special constitutional structure in China as a reflection of the strengthening of the SPC’s power.

Professor Björn Ahl finally concluded that Chinese judicialization bore significant differences from the judicialization in liberal constitutional systems. According to this opinion, judicialization in China has its own characteristics. The SPC still operates as an ‘active lawmaker’ even though it possessed parallel law-making powers, and has no ultimate power of decision-making on critical problems in society. As SPC’s power increasing, political decision-making of other actors of the party-state would not be changed into more rule-based judicial forms of decision making.

The text is contributed by the Center’s intern, Ms. Xiaodan Zhang who is completing her Masters in International and Comparative Law (International Business Law) at the University of Helsinki.