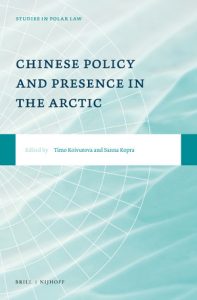 The Finnish China Law Center is pleased to introduce the new book entitled ‘Chinese policy and presence in the Arctic’ edited by Professor Timo Koivurova and Dr. Sanna Kopra from the University of Lapland.

The book was built on and developed from the report titled ‘China in the Arctic; and the Opportunities and Challenges for Chinese-Finnish Arctic Co-operation.’ The report was published in February 2019 as part of the project ‘Finland’s Arctic Council chairmanship in the times of increasing uncertainty’ funded by the Finnish Government’s Analysis, Assessment and Research Activities unit. It drew ample attention among the media and government officials from Finland and abroad, signaling an increased interest in China’s role in the Arctic. This has encouraged the authors to diversify and expand their approach to the theme.

The book offers an overview of China’s economic engagements in the Arctic, China’s policy regarding Arctic governance, and how it has evolved during the past years. It also discusses China’s interests and strategies in the region, and the initiatives the country has offered. It should be noted that the book is centered around economic and governance aspects, rather than the geopolitics implications of China’s involvement in the Arctic and its interaction with other players in the region.

‘Chinese policy and presence in the Arctic’ is the first comprehensive account of China’s endeavors in the Arctic region. ‘The book is unique in the sense that it does not follow the predominant alarmist approach which views China as a threat, but attempts to provide an objective analytical analysis of Chinese Arctic policy’, said Dr. Sanna Kopra. Since extensive reviews of China’s policy and presence in the Arctic are scarce, the book poses as a valuable contribution to the current collection of scholarly work on the topic and a must-read for students and scholars of China studies and Arctic affairs.

The book also offered an opportunity for the authors to focus on the environmental issues relating to China’s presence in the Arctic. The chapter ‘China, Climate Change and the Arctic Environment’ examines in great detail China’s ecological footprint in the Arctic and its role in international efforts to tackle climate change and pollution. ‘This is something that has not been discussed in this length in the existing literature’, added Dr. Sanna Kopra.

The book is available on the publisher’s website at https://brill.com/view/title/55687.