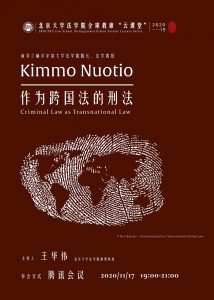 Professor Nuotio contributed to the series with a presentation on “Criminal Law as Transnational Law”.