On 29 October 2022, Professor Kimmo Nuotio, Board Member of the Finnish China Law Center held a guest lecture on Methodology of Criminal Law Theory: Art, Politics or Science? as part of the PKU Law School Distinguished Global Faculty Lecture series. The lecture discussed the role of the general doctrines of penal liability in the criminal law theorising. 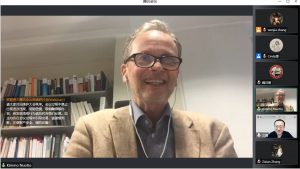 In 2021, Professor Nuotio published the edited volume “Methodology of Criminal Law Theory: Art, Politics or Science?”  together with Professor Shin Matsuzawa. In his presentation, Professor Nuotio told the story behind this book and introduced some ideas that had come up in the different chapters. One debate concerns the issues was whether we should abandon a normativist approach and move towards a more realist and even causalist understanding of law as the Scandinavian Realists suggested a few decades ago.

The German doctrine stands for many as the most progressive and as the ideal model which has been discussed or even copied in many countries. But can it be copied? Professor Nuotio commented on the discussion from a Finnish point of view. The Finnish story tells that a long-term German influence was interrupted after the World War II, and when the connections were built again in the 1980’s, this did not lead to a transfer and direct adoption of German ideas, but rather to a birth of a genuine Finnish doctrine which is related to the German one but which is more pragmatic.  In the Finnish case the development of the national doctrines was linked to the need to modernise the outdated text-books as well as the need to be able to serve the legislature which was about to reform the so-called general part of the Penal Code. German criminal law theory was not he only source of inspiration, since also Swedish and other Nordic law was relevant and served as a point of reference. Also the case law of the Supreme Court of Finland played a role since the doctrine had to be compatible with it as well. 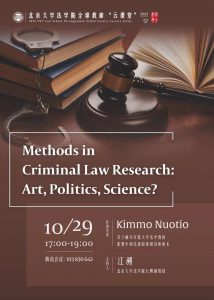