Retailers invest millions of dollars in security. This study investigates how customers and retail staff perceive insecurity during service encounters. Perceived insecurity is divided into financial, physical, psychosocial and time-related insecurity. A total of 39 consumers participated in seven focus group discussions, and 34 retail staff members responded semi-structured interviews. The study confirms that from both customer and staff perspectives a high quality service encounter has an influence on perceived insecurity, and it diminishes disturbance and criminal activity. However, there are differences between customer and staff perspectives in many areas.

Online weight loss services provide a novel kind of a material tool that ‘scripts’ the practice of slimming. This study takes a practice-theoretical approach to the slimming practice produced when using such services. It analyses the script of use that is constructed by the services, and the meanings, materialities and competences that are enacted in their use. Based on 20 interviews with women who were users of two Finnish online weight-loss services, the study concludes that the services transform food into quantitative depictions of calories and nutrition. They configure slimmers as calculative agents and slimming as a practice based on incessant recording and monitoring. For online slimmers, the services acted in the double role of a control device with a focus on calorie restriction, and a learning device used to develop a skill of healthy eating. In the latter role, online slimming was hoped to result in an internalisation of a lifestyle change that would make calculation and constant monitoring unnecessary and the services redundant for their users. The results suggest that for its practitioners, online slimming is temporary rather than longstanding, but it may and is expected to act as a mediary in establishing other practices related to healthy lifestyles. 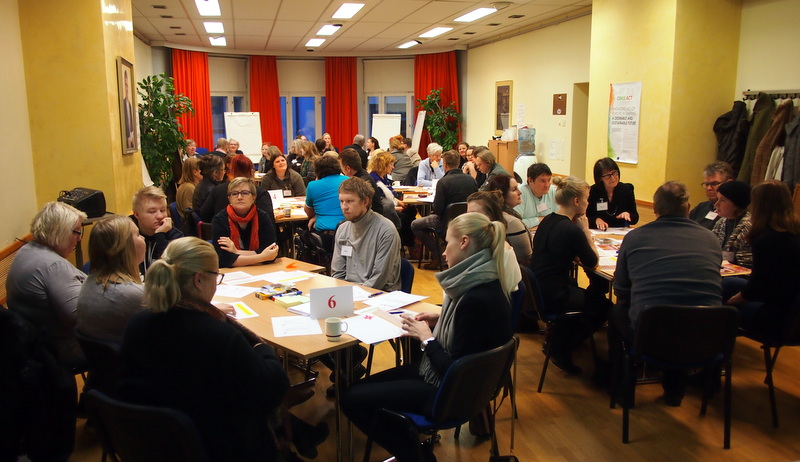 Six visions on desirable and sustainable futures were developed by 42 citizens in the CIMULACT NCV workshop in Helsinki on January 9th, 2016 :

The NCV workshop in Helsinki was part of a series of CIMULACT workshops across 30 European countries, contributing to a total of 180 citizen visions. These visions will be developed to research priorities and policy advice for the European Commission’s Horizon 2020 programme at latter stages of the CIMULACT project.

More information on the CIMULACT project is available at www.cimulact.eu. 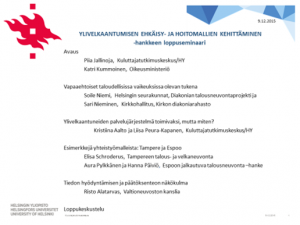 In this book chapter, Johanna Mäkelä and Mari Niva investigate the role of lay people as stakeholders in climate change adaptation. Drawing on a practice-theoretical and everyday life approach, they suggest new conceptualizations that serve to bridge between production, manufacturing and consumption. If you are interested in receiving a copy of the book chapter, please contact Mari Niva (mari.niva(at)helsinki.fi). 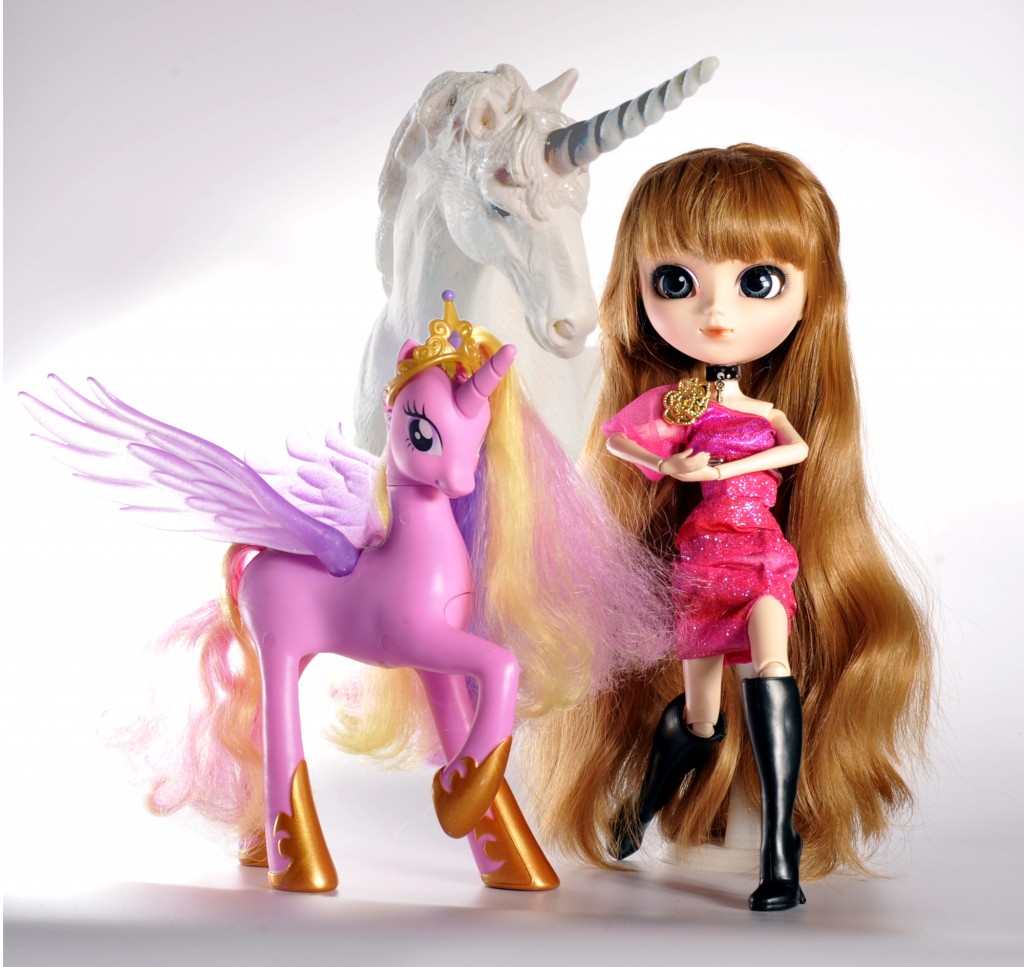 Big data involves enormous, highly complex and unstructured data sets. It tracks activities and collects logs, often in real time. So when you change from one television channel to another, your activity may be saved on a server and potentially be combined with equally minute activities from others.

Are you then participating in public discourse and for the common good? Perhaps you are more than you think.

In recent years, studies on cultural consumption have experienced a Bourdieusian renaissance. This is indicated by a growing body of research analysing distinctions in different areas of culture, and numerous studies on the homology thesis applying the concepts of distinction, field and capital. Concurrently, however, it has been argued that instead of distinctive tastes, distinction and class status are increasingly manifested by cultural omnivorousness. Most studies on distinction in food have analysed eating out and stylization through restaurant preferences, rather than everyday food choices.

In this article, Nina Kahma, Mari Niva, Satu Helakorpi ja Piia Jallioja investigate everyday food choices from the perspective of distinction and omnivorousness. They draw on cross-sectional quantitative data collected in 2012 among 15–64-year-old Finns (N = 2601). The article maps out the relationship between food choice frequencies, dispositions and social background with Multiple Correspondence Analysis (MCA). The results show that the consumption of fruit and vegetables, ready-meals and convenience foods were among the most divisive food choices. The first structuring dimension juxtaposed processed, fatty and sugared foods with unprocessed foods and fresh ingredients. This dimension was associated with healthiness and weight control as dispositions. On the second structuring dimension there were differences in the valuation of taste, pleasure and sociability, and a contrast between moderate and restrictive choices. Particularly the first dimension was associated with educational, occupational, and gender differences. Distinction within everyday food choices was manifested in the use of healthy and unprocessed foods and ‘moderate hedonism’ in contrast to more restrictive tastes.

TRIPOD is a new project funded by the Academy of Finland and led by Sampsa Hyysalo at Aalto University School of Art and Design. Consortium partners include Syke (Finnish Environment Institute), Aalto University School of Business, and Consumer Society Research Centre (CSRC), University of Helsinki. TRIPOD investigates the role of intermediation in energy transitions by specifying what work intermediation performs in different actor configurations and contexts. We focus on solutions for energy efficiency, distributed electricity generation, heating systems based on renewable energy sources, and the related solutions for timing of consumption and storage of electricity and/or heat. The objectives of TRIPOD are to

CSRC is in charge of sub-project 1, which buildings on case studies of intermediation in the interface between energy consumption and production. Contact: Eva Heiskanen (eva.heiskanen@helsinki.fi) ja Kaisa Matschoss (kaisa.matschoss@helsinki.fi).