By now, the COVID-19 has spread to every corner of the world, and only a handful of dictatorships and tiny island countries have not yet reported on confirmed infections. At the same time, the social and political dimensions of the crisis have come more and more apparent. There have been concerns, for example, about how authoritarian political leaders might use the crisis as an excuse to consolidate their power, discussion about whether authoritarian or democratic countries fare better in handling the pandemics, and how the situation has affected elections coinciding with the crisis. In this post, Eemil Mitikka is going to consider how the COVID-19 crisis relates to one of the key concepts in social sciences, which is trust. This is the fifth post of our “Politics & Pandemics” special series. 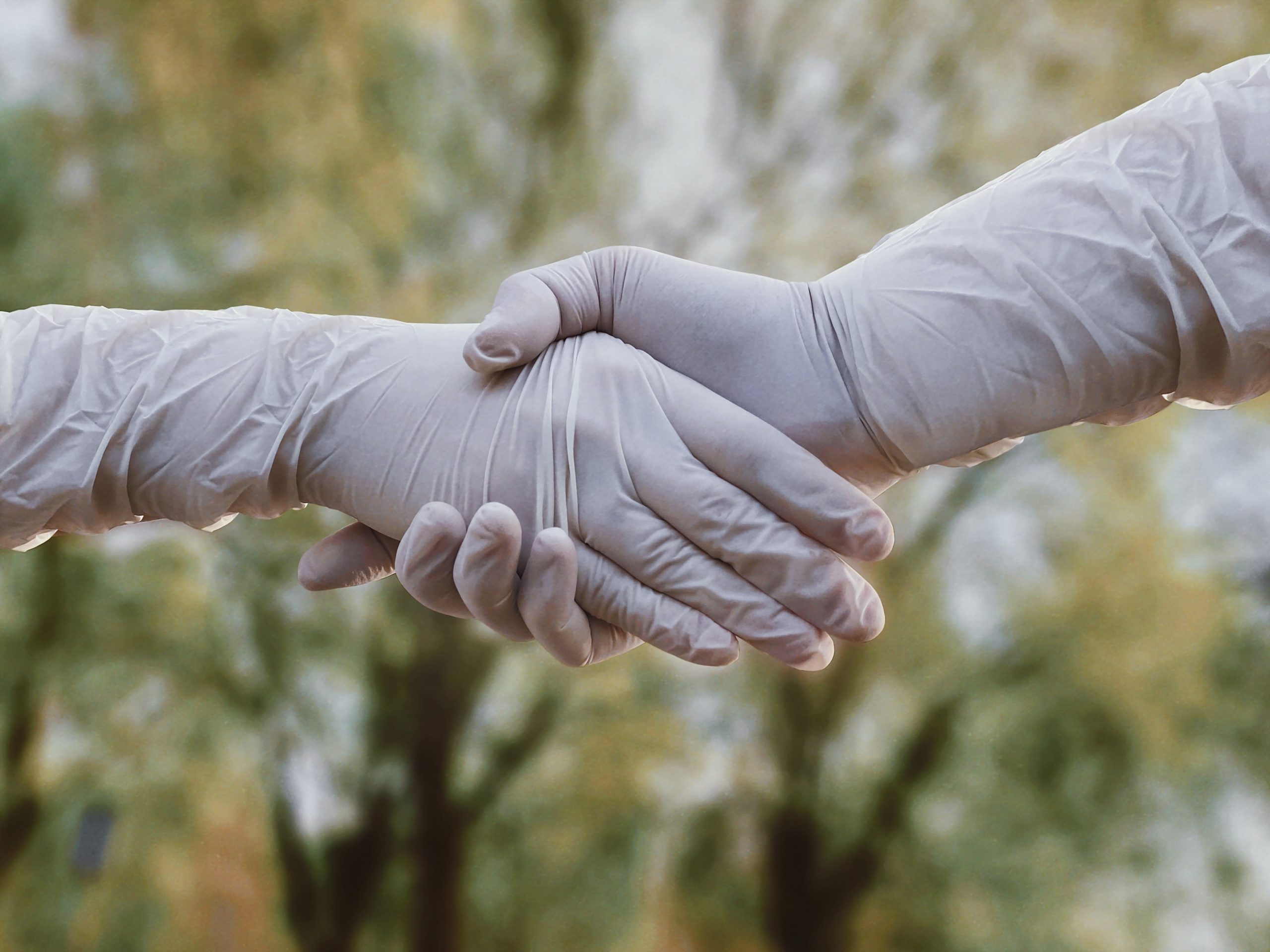 In the light of existing data, a short answer to the latter question is ‘no’. Somewhat counterintuitively, many poor and distrusting former Soviet and communist countries have actually suffered so far from fewer per capita COVID-19 deaths and cases than rich and trusting North and West European societies. Figure 1 illustrates how political trust relates to COVID-19 deaths per million people in European societies by the 29th of April 2020 (NB: country abbreviations may be found in the appendix at the end of this text). The data for political trust are drawn here from the eighth round of European Social Survey (conducted in 2016), and for COVID-19 deaths by million people from the Worldometer website. Political trust is operationalized here as a summated scale that measures trust in parliament, the legal system, police, politicians, and political parties. 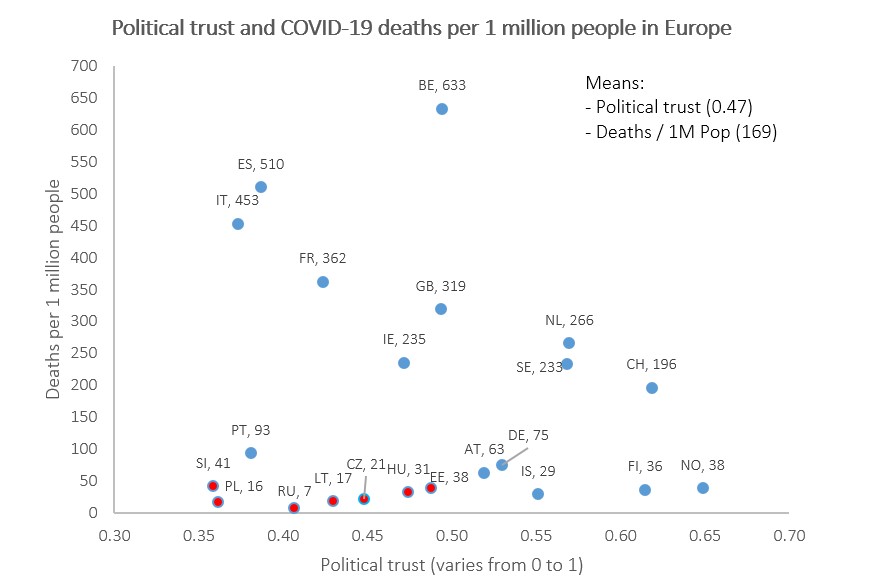 As we may see from the figure, differences in deaths per million people between Western/Northern European and Eastern European countries are stark. Out of the seven former communist countries examined here, only Slovenia (41), Estonia (38) and Hungary (31) have slightly more deaths per million people than those North/West European countries with least deaths (Iceland, 29; Finland, 36 and Norway, 38). Yet, despite their low trust society status, former communist countries of Eastern Europe investigated here seem to have thus far fared significantly better in terms of relative COVID-19 death rate than their North and West European peers.

What makes this observation interesting is that countries with communist legacy are known to face particular difficulties in establishing trusting social relationships (Kornai et al. 2004; Mishler & Rose, 2001; Shlapentokh 2006; van der Meer 2017). Therefore, one could expect that if people in post-Socialist countries do not trust each other or their political institutions, they would be more skeptical towards public measures that aim to prevent the spread of the virus and more reluctant to comply with enabling acts than their peers in more trusting societies – which could result as more COVID-19 cases and deaths, than in trusting societies. However, as can be seen from Figure 1, the evidence so far suggests that this is not the case.

A similar pattern occurs if we look how social trust relates to the number of COVID-19 deaths in Europe (see Figure 2) – though it should be mentioned here that these similarities might not be so surprising, as some studies suggest that political and social trust tend to correlate with each other (Bäck et al., 2016; Newton & Zmerli, 2011). Social trust is operationalized here as a country means to a survey question ‘Most people can be trusted, or you can’t be too careful?’, where 0 means ‘You can’t be too careful’ and 1 denotes ‘Most people can be trusted’. Again, many former socialist countries have both low levels of trust and COVID-19 deaths. 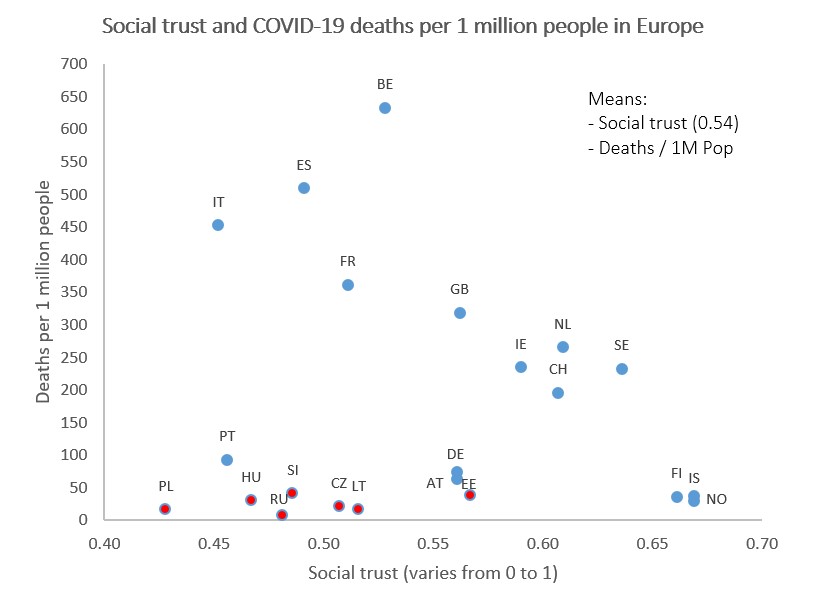 What is interesting here is that the overall picture of how trust relates to the number of COVID-19 cases does not change radically even if we expand our selection of countries. Figure 3 depicts the levels of political trust in relation to COVID-19 cases per million people in 25 OECD and post-Communist countries. The data for political trust here are drawn from the sixth wave of the World Values Survey (conducted in 2010–2014). For the COVID-19 cases by 29th of April 2020, I use again the Worldometer data. Political trust is operationalized here as trust in police, courts, government, political parties, parliament, and civil service, and spread of the COVID-19 as infections per one million people.

Again, we may see how former communist countries have notably less COVID-19 infections than many Western or OECD countries, although the differences are not as stark as with European comparison. The inclusion of authoritarian Central Asian and South Caucasian former communist societies partly repaints the picture, because many of these countries have above the average levels of political trust, and only a few reported COVID-19 cases (for example, Uzbekistan, 58 cases; Kazakhstan, 164 cases and Kyrgyzstan, 112 cases). Yet, the total number of COVID-19 cases per million people is below the average in almost all post-Communist countries, as only Estonia (1251 cases) and Belarus (1292 cases) exceed the average (973 cases) of COVID-19 cases per million people in countries examined here. 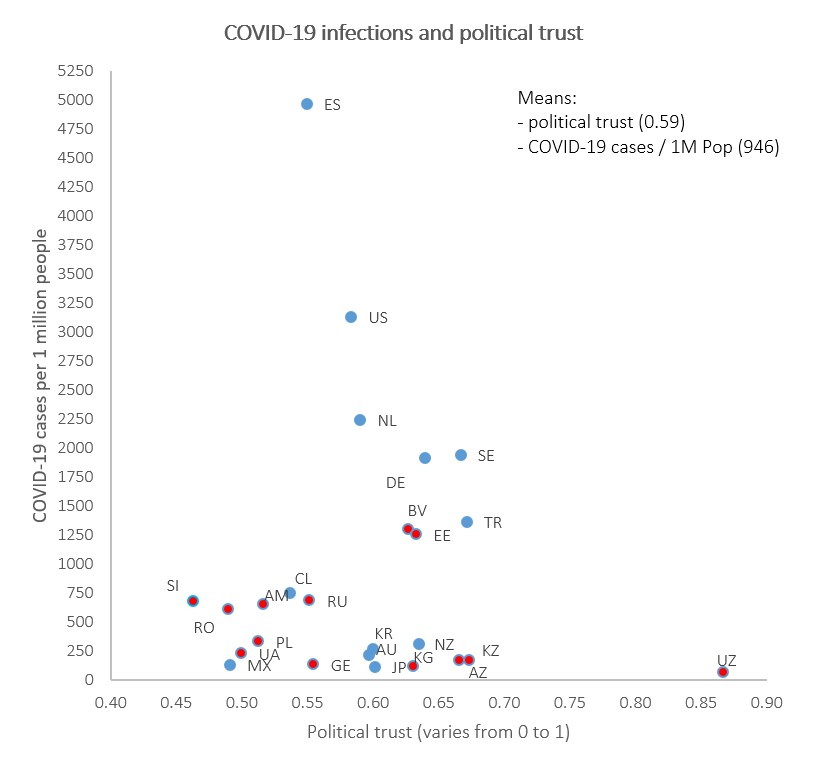 Figure 3 offers an overview of how social trust relates to the number of COVID-19 cases. In order to look at the situation from a slightly different angle, social trust is operationalized here as trust in ‘people you meet the first time’ (for discussion about how to measure social trust, see Almakaeva et al., 2018; Sturgis & Smith, 2010). Out of the six countries with the highest levels of social trust, only Australia (264) has a below-average number of COVID-19 cases per million people. This is somewhat counterintuitive because one could assume that higher levels of social trust would make people stick with the quarantine rules and respect other people, and, consequently, there would be less COVID-19 infections in high trust societies. 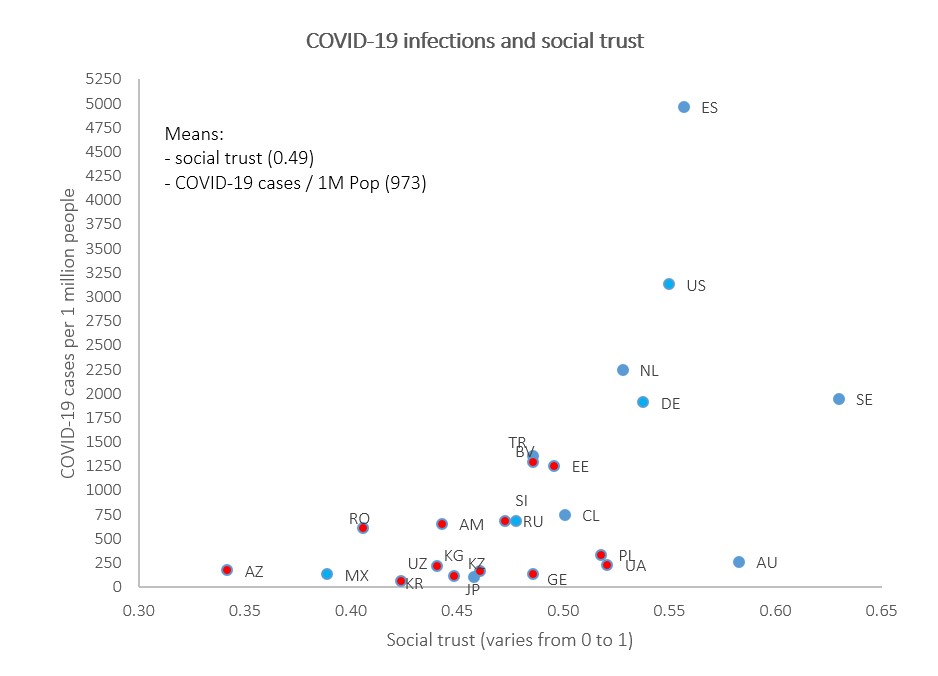 Naturally, it is important to keep in mind that the findings discussed here are quite speculative for various reasons. First of all, the COVID-19 crisis is still ongoing, and hence we do not know yet how many people actually got infected or died during the pandemic in different countries. The number of COVID-19 infections will still increase in all countries – including former communist societies – and this can repaint the picture on the relationship between trust and COVID-19 cases. Secondly, the current pandemic is likely to reshape people’s attitudes towards their governments and compatriots, and this can be reflected in how much people trust their governments, public institutions, and compatriots in the future in different societies. For instance, we may already witness how support for incumbent political leaders rises in many countries in Europe and elsewhere. However, this surging support is rather likely to reflect a rally around the flag/leader effect than an actual increase in more deep-rooted political support. Moreover, previous research (Prati et al., 2011) suggests that public trust in specific institutions, such as trust in health authorities and media, might play a more important role in people’s compliance with the posed public restrictions and recommendations during the pandemic than the overall aggregate levels of political trust (which was used in my examination here). Finally, it has to be noted that many formerly communist countries have less developed health care systems, which, among many other things, might have affected people’s behavior and political decisions when the COVID-19 started to spread in Europe. According to Wall Street Journal, for example, Central and Eastern European countries were quicker to enact strict social-distancing measures, because they feared that their health-care systems would be otherwise soon overwhelmed by the virus, whereas in the West governments were perhaps more confident of their health-care systems’ ability to fight a sudden pandemic. Thus, it is possible that citizens in poorer low trust societies took the crisis more seriously at the beginning than their peers in richer countries.

Another concern is about the validity of both the COVID-19 and survey data. In Russia, for instance, half of the population believes that the official COVID-19 statistics are underestimated. Moreover, comparing levels of political trust globally is problematic due to dissent political traditions of different political regimes. In global comparisons, political trust is found to be highest in such authoritarian regimes as Uzbekistan, China, Azerbaijan, and Qatar (Rogov, 2017; van der Meer 2017; see also Figure 2). Thus, high levels of political trust in illiberal countries may reflect lower expectations of citizens towards the political system compared to people’s political expectations in established liberal democracies (Kestilä-Kekkonen & Vento, 2019). Citizens of authoritarian countries might also avoid criticizing state institutions or express support towards the regime because they have been socialized to it (Welzel & Dalton, 2015). All this naturally complicates global research on the effects of political trust.

However, although trust – be it political or social – does not seem at the moment to result to the lower COVID-19 infection rates, it may still have a significant role after the pandemic. Previous research suggests trust is connected, for instance, to higher rates of economic growth (Knack & Keefer, 1997; Zak & Knack, 2001) and better governance (Bjørnskov, 2011), which will have crucial roles when the post-pandemic reconstruction truly begins. In other words, one could expect high trust societies to have better odds to recover faster from the economic and social crisis that the COVID-19 has caused than the low trust societies do.

Appendix: country means for political and social trust, and for relative numbers of COVID-19 deaths and cases per one million people by 29th of April 2020

One Reply to “Does trust help fight the COVID-19? A brief overview of the pandemic situation in former Soviet and communist societies”