We return with our regular posts about elections, electoral malpractice, and cyber-security, and this Summer and Autumn have been full of notable events we aim to uncover. Elections and protests in Belarus and Kyrgyzstan, single voting day in Russia – we will discuss all these and other cases in the following weeks.

Today we invited Dr. Alla Leukavets, who is a policy analyst at the Center for Strategic and Foreign Policy Studies in Minsk, to write about the conduct of the presidential elections in Belarus on the 9th of August 2020. Alla Leukavets holds a PhD in political science from Bremen International Graduate School of Social Sciences and has recently finished a post-doc programme in electoral studies at the University of Tartu. Alla specializes in the domestic and foreign policy of Belarus and other Eastern Partnership countries, Eurasian integration, and energy relations between Russia and the European Union. Leukavets’ enlightening and rich contribution will be split into two parts, and today we publish the first one that deals with election observation in Belarus.

Election observation is the process of assessing the conduct of elections in accordance with national legislation and international election standards by one or more independent actors. It plays an important role in ensuring electoral integrity. This blog post will discuss the types of election observation, main actors, and kinds of electoral malpractices based on a case study of the 2020 presidential elections in Belarus.

Based on the actors who carry out monitoring, election observation can be divided into international and national. International actors include, for example, observers delegated by other countries as well as missions deployed by international organisations (for example, OSCE ODIHR, OSCE PA, the EU, Council of Europe PA, CIS, SCO).

National actors allowed to carry out election observation of presidential elections, according to the Belarusian national legislation (art. 13 and 155 of the Election Code), include members of Parliament, representatives of local governmental organs, political parties, other public organisations, labour unions, proxies of the candidates as well as citizens (Table 1).

Based on the length of monitoring, election observation can be divided into short-term and long-term. Short-term focuses on the monitoring of early voting (five days before the main election day) as well as the E-day. Long-term observation includes the early phases of the electoral process, usually starting with the registration of candidates.

Table 1: Main election observation actors in Belarus and their participation in the 2020 presidential elections 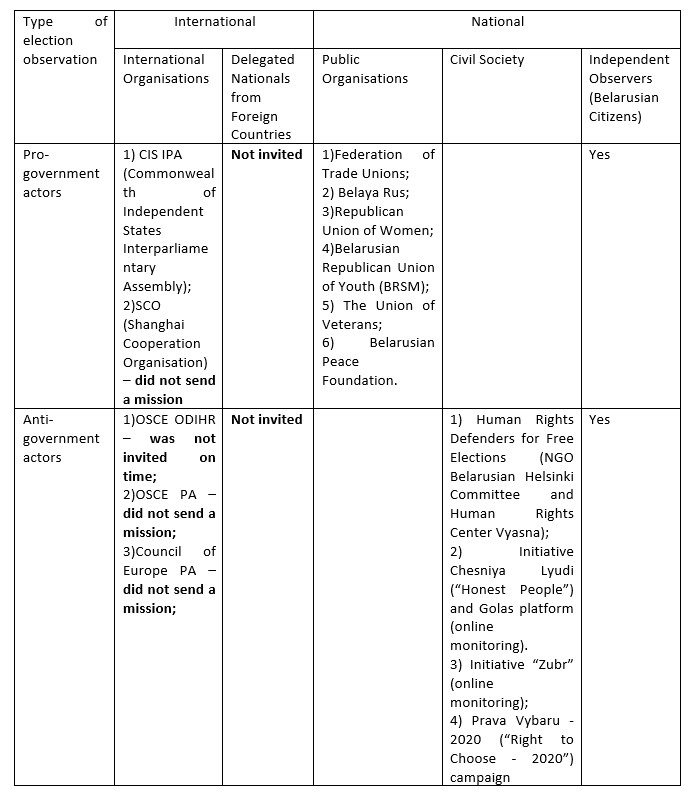 For the first time in the election history of Belarus, the presidential elections were not observed by the OSCE Office for Democratic Institutions and Human Rights (ODIHR). It did not send its mission to Belarus because an invitation from the Belarusian Ministry of Foreign Affairs to deploy a mission came more than two months after the start of the electoral campaign reportedly because of the risks of Coronavirus. Accepting an invitation and sending a mission so late would have prevented the OSCE ODIHR from carrying out comprehensive coverage of the electoral process. The OSCE Parliamentary Assembly and the Council of Europe Parliamentary Assembly also refused to send their missions to observe the 2020 presidential elections in Belarus.

The Central Election Commission issued several resolutions (No 15 in May 2020 and No 115 in July 2020) before the elections regulating the functioning of the national election observers. The resolutions were based on the recommendation of the Ministry of Health on sanitary and anti-epidemic measures during the presidential election. According to these resolutions, only 3 observers could be allowed inside the polling station during the early voting and 5 observers – on E-day. In addition, it was envisaged that at polling stations with precinct election commission (PEC) members below 8 persons, the number of observers could not exceed half of the commission’s size. By adopting these resolutions, the authorities artificially created conditions under which independent observation of the voting and counting was severely limited or completely impossible.

By the time the resolutions were adopted about 43.000 observers representing pro-government political parties and public associations (see Table 1) had been accredited with precinct election commissions (the total amount of polling stations for the presidential elections in Belarus was 5.767). These observers did not register any facts questioning the legitimacy of the 2020 presidential elections.

The right of observers to be present at polling stations was determined by the order of their accreditation with the election commissions, and the delegates from the civil society organisations or independent citizen observers in most of the cases were assigned numbers more than 5, which deprived them of the opportunity to be present inside the polling stations and monitor the process of voting and counting of votes. For instance, in the case of “Human Rights Defenders for Free Elections” – a joint initiative of two human rights NGOs “Belarusian Helsinki Committee” and Human Rights Center “Vyasna” – a total of 798 observers were accredited with the PECs out if which only 93 observers (11,5%) were admitted to the polling stations and only for a limited period of time. Only one observer was able to fully observe the entire voting process (early voting, voting on the main day, and home-bound voting).

Initiative “Chesniya Lyudi” (“Honest People”) was advanced by the election campaign team of Viktar Babarika and became a multifunctional platform for fighting against the regime.  It delegated about 6.000-7.000 observers to monitor presidential elections, developed an online training course for observers, and launched a mechanism for helping those who had suffered as the result of the repressions during and after the elections. During the first two days of early voting, Honest People had registered over 3000 violations in the work of PECs. However, none of them had been addressed by authorities. Honest People observers in most cases were not allowed to enter the polling stations and were often deprived of accreditation and detained.

Honest People acted in cooperation with the two online platforms for alternative counting of votes – “Golas” (“Voice”) and Zubr.in (the website has been blocked by the Belarusian authorities). The platforms asked voters to take photos of the ballots at the polling places and submit them to the platforms. According to the final report of Golas, there were falsifications made at least in every third polling station which proved that the official results, according to which, Aliaksandr Lukashenka had won with 80.1%, were clearly false (data has been analysed for 1.310 polling stations out of a total of 5.767 polling stations across Belarus).

Prava Vybaru – 2020 (“Right to Choose – 2020”) is a joint initiative of eight organisations, including seven opposition political parties and one social movement. The initiative sent about 600 observers to monitor the early voting out of which only 45 were allowed to be present inside the polling stations. During the first day alone, the observers registered 318 complaints concerning the malpractices of the electoral administrations – the major one being a large artificial increase in voter turn-out. . During the whole course of observation, the observers registered 1634 electoral falsifications and 28 observers from Prava Vybaru had been detained by the 9th of August.

Finally, national election observation was also done by independent citizen observers. In order to register as such, one needs to collect 10 signatures of Belarusian citizens in support of his or her candidacy. These elections witnessed a rise of civic activism resulting in many Belarusians expressing their wish to observe the elections. These observers, just as the representatives of the aforementioned civic initiatives, were not allowed on the premises of the polling stations. All they could do was to stay outside and sometimes look through the windows or doors at the work of electoral administrations. In spite of these limitations, the “outside independent observers” played a very important role in gathering evidence of electoral falsifications. Their main function was to register voter turn-out and to count voters wearing “white bracelets” – a symbol for demonstrating opposition to the ruling regime. This was particularly crucial during the early voting which is the usual time when the electoral administrations engage in vast falsifications. The data from independent observers demonstrated that the official voter turn-out during early voting presented by the authorities was twice as high in comparison to the actual results.

The second part of the publication will be published on Monday, the 12th of October.

One Reply to “Election observation of the 2020 presidential elections in Belarus: main actors, electoral manipulations, and lessons for the future.”