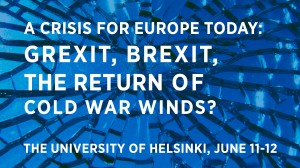 The European Union has much to be proud of. Yet, today, everywhere one looks, one finds Europe facing a crisis. The language of crisis seems to be the current narrative of Europe – replacing more optimistic narratives that marked its first 50 years – first of peace building, and then of building shared prosperity. Today there is the crisis of Brexit, with a confirmed in-out referendum expected next year. The crisis of Grexit is far from being resolved, with talk each week of an imminent failure to balance the books. The Eurozone crisis is far from being resolved – even with the six-pack and new governance rules emerging. There is a new security crisis with cold winds blowing in from the East and land annexed: sabre-ratling or the start of a new cold war– some 25 years after the Fall of the Berlin Wall, 40 years since the landmark Helsinki Rights Accords, and 20 years after the Organisation for Security and Co-operation in Europe (OSCE) launched?

This Europaeum annual conference proposes to take the pulse of Europe today. The event will operate as a meeting of minds, bringing together experts and academics from the fields of economics, politics, defence, diplomacy and culture, as well as young research scholars drawn from our 11 partner universities.

Key questions will include: Can the EU unravel contradictions in the Eurozone model? Can the EU resolve exit demands of select members? Can cultural fragmentation be avoided? Can Europe face down its Eurosceptic critics? Is a new iron curtain emerging? Can Europe find the right kind of leadership to go forward? Can the pessimism be reversed?

Organized jointly by Europaeum and the Network for European Studies