The CoE organized a workshop on Martyrs, Heretics, and Virtues on 28 April 2016. One of the invited lecturers was Prof. Jonathan Sheehan (University of California at Berkeley), whose research interest concern the cultural and intellectual history of early modern Europe, with particular interest in the history of religion, science, and scholarship. His latest publications include The Enlightenment Bible: Translation, Scholarship, Culture (Princeton University Press, 2005) and Invisible Hands: Self-Organization and the Eighteenth Century (The University of Chicago Press, 2015). The other invited speaker was Dr. Erik Eliasson (Helsinki Collegium for Advanced Studies), whose current research project concerns The Middle-Platonist Theory of Fate. Eliasson has studied the peripatetic tradition, the early Aristotle commentators, and Middle and Neo-Platonism. He has published the monograph The Notion of That Which Depends on Us in Plotinus and its Background (Brill, 2008). 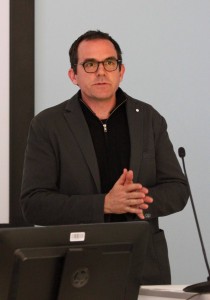 In his lecture “The Martyr and The Heretic,” Prof. Jonathan Sheehan  presented how the nature of martyrdom was contested in early modern Europe. Based on his research on early modern martyrologies, such as John Foxe’s Acts and Monuments (1563), Sheehan demonstrated how the classification and construction of martyrs and martyrdom became a disputed issue among different denominations. Early modern authors shared the view according to which the martyrs of the “primitive church” were examples of pious Christian life, though they also critically evaluated the theological views of the early church fathers. Thus, in Sheehan’s view, early modern Christian apologetics on martyrdom resulted in what may be called as the resurrection of heterodoxy. (Photo: Heikki J. Koskinen) 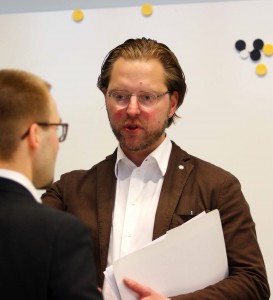 After Sheehan’s lecture, Dr. Erik Eliasson (HCAS) presented the recently published volume Shaping Heroic Virtue: Studies in the Art and Politics of Supereminence in Europe and Scandinavia (Brill, 2015). In his lecture, Eliasson explored the reception of the concept of “heroic virtue.” This idea of virtue, so extreme that it can be characterized as “heroic” or “divine,” originates in Aristotle’s Nicomachian Ethics (VII.I.I). The volume maps the important endurance of this concept from Late Antiquity to the 18th century Europe. (Photo: Heikki J. Koskinen)

Prof. Risto Saarinen was invited to comment on Eliasson’s presentation and Shaping Heroic Virtue. Saarinen’s earlier publications (1990; 1996; 1998) concerning the reception of heroic virtues in Reformation have recently revived interest among the intellectual historians. Saarinen laid out the current state of research and contemplated some future directions to go on. The CoE shall continue cooperation with Eliasson and his team in Uppsala in the coming fall.