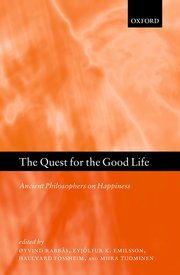 What ought we do? How should we live? And what makes us happy? While the first question sounds clearly ethical or moral to most philosophers and even the second question contains a normative element, being a question about how life should be lived, the third question might seem somewhat disconnected from the ethical discourse. However, as is generally known, in Greco-Roman antiquity, the question of how we should live was inextricably linked to the question of what makes us happy on the one hand and to the virtues of character on the other. Many philosophical schools made a case for there being a link between what is objectively good and what in fact makes us happy in the end. Further, arguments were presented to the effect that the practice of philosophy is an organic component in the quest for the good life, so much so that the Stoics even argued that virtue understood as a stable condition of one’s character and a disposition not to accept any false appearances. Such a condition, they argued, was only to be achieved through practicing Stoic philosophy. Even though the Aristotelians did not accept this Stoic position, Aristotle had argued that even though not sufficient, virtue is necessary for happiness. Virtue, in its turn, was understood with respect to what really is good and what is true. Therefore, the quest for the truth combined with the quest for morality was, in ancient philosophical schools, generally taken to be vital in our quest for living well. Our edited volume covers a millennium of philosophical theorizing and offers the first comprehensive study on the role of happiness in ancient ethics from the Presocratics to late antiquity.